Showing posts from June, 2020
Show All

We're not getting E3 press conferences this year. However, thanks to the PlayStation 5 reveal, I still found an excuse to wake up at 4:45 in the morning to stare at video games. Sony packed a lot into its almost 90-minute, PS5 Reveal. There were plenty of games I want to play and, barring a prohibitive price point - I'm "good" up to ¥50,000, but would have to think long and hard for anything above that - I intend to buy a PS5 at launch. However, overall, I came away underwhelmed. Let's start with the box. We've all seen the router jokes, which are 100% accurate and 100% done to death. It is over-designed, has a weird collar, I don't like the colour scheme, and I'm a little concerned about the size. The disc drive looks like an afterthought, hanging on to the console for dear life, and while the unit does sit horizontally, it appears ill-suited to this position. Of course, appearances don't really matter, as it'll sit under my TV for the next se
Post a Comment
Read more

Mafia 3 and a Messy BBQ 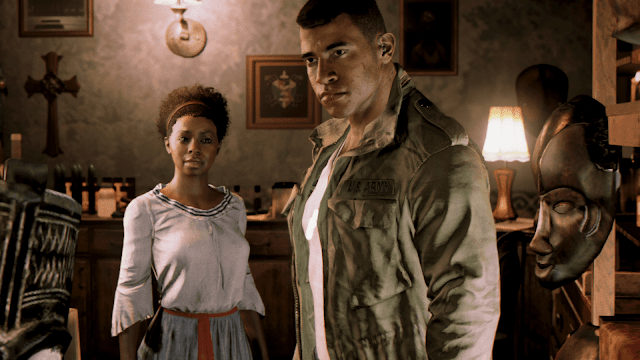 I have to locate and gun-down some white supremacists. A guilt-free delight.  I'm playing as Lincoln Clay, a black veteran and an absolute unit. My pasty targets have congregated in an affluent suburb of 1968 New Bordeaux (New Orleans), so I'm going to stand out like a sore thumb. They are having a BBQ in some cunt's back yard. There'll be burgers, chicken, ribs and a side helping of old-timey, Southern racism. I forgot to bring a bottle, but I did bring a rifle and a fist full of grenades. I arrive outside the property and see the red markers appear on my radar. That means I've found my villains, but I'm confused by several blue symbols that seem to be mingling with the reds. Blues are cops. Blues aren't my friends, but for the most part they have been a separate enemy, better avoided than directly confronted. But they're here at the racism tea party. I approach cautiously. I hop the chainlink fence and hug the wall alongside the house. I can hear the B
Post a Comment
Read more
More posts