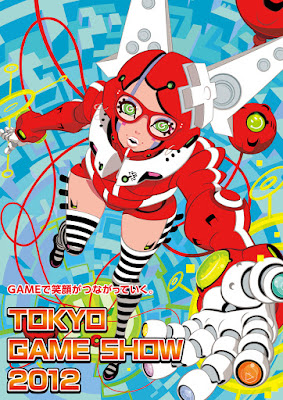 You are probably already sick of my complaining about how I'm not in Japan for this year's Tokyo Game Show. This is the first TGS I have missed since 2005 - my press pass email is still marked "unread" - and this is the longest I’ve been away from Japan in some time. It would seem that TGS is prepared to move on without me, but as much as I'd like to deny its existence, I am still looking forward to it. Obviously, my hands-on impressions will be a tad unreliable this year, but I'm still hoping to cover most of the big announcements as part of a week+ of posts all about Japan; this series will include, but will not be limited to TGS coverage.

To get us started, here is a TGS preview, with a round-up to follow at the end of the week. I shall now resume smothering myself in Japanese condiments whilst singing the entirety of Utada Hikaru’s back catalogue.

Much like E3, Tokyo Game Show has lost some of its luster over the last few years. Japanese games are no longer the toast of the industry as the mobile game market continues to aggressively expand, rendering TGS of far less interest to audiences outside of Japan. However, it remains an important event in the gaming calendar and is vital in gauging the pulse of the Japanese industry.

Looking through software line-ups and booth information, it's evident that mobile games continue to encroach on the territory of traditional, console and handheld games. From strictly mobile developers like GREE to industry stalwarts like Konami, games played in the palm of your hand will be a major focus at this year's TGS. Last year a number of big publishers scaled back their presence, with some pulling out entirely, resulting in mobile games taking up half the floor space of the giant exhibition halls. GREE will take centre stage with a Keynote presentation – usually reserved for the Sony’s of the world - and you can bet that the large space occupied in the past by Microsoft, who is not attending this year, will be swallowed up by smart phone games.

Despite this shift to mobile, there will still be plenty to keep the console and handheld purists happy. SEGA always thrives at TGS, and this year’s stand will be dominated by Yakuza 5. Despite Sega's recent restructuring, there is still an outside chance that Nagoshi's latest will make it west, but don't expect any announcements just yet. Sega's other major attraction figures to be Phantasy Star Online 2 for the Vita; already available on the PC in Japan, it is one of the few high profile, forthcoming releases for Sony’s handheld.

Sticking with Vita, Keiji Inafune's Soul Sacrifice continues to look promising, if not a little grim, and a playable demo is expected. I don't see much else of interest for the Vita, though we can always hope that Sony has something up their sleeve, though recent history would suggest otherwise. The 3DS will be getting plenty of Capcom love, headlined by the first playable demo for Monster Hunter 4, which will feature battles against three different monsters and is sure to attract the largest queues over the four days. Capcom are teasing "surprising information", but I wouldn't hold your breath for a Vita port. Ace Attorney 5 will be on hand as will the anime-style, Lost Planet spin-off, EX Troopers, which is also coming to PS3. I knew very little about this game before researching this post, but its colourful visuals and interesting use of an existing property have me intrigued.

Konami will look to build upon their well-received announcements at last month's Metal Gear 25th Anniversary event. Metal Gear Rising will have a brand new demo, and we might even get more Ground Zeroes footage to go along with a playable demo for Social Ops, the smart phone title due later this year. Expect Square Enix to further impress with the Final Fantasy XIV rehash and for 3DS RPG, Bravely Default: Flying Fairy, to continue to gather momentum as we approach its October debut. SE have confirmed that they will be showcasing Dragon Quest X for the Wii U - Nintendo does not attend TGS, so any Wii U news will be third party - and we might get some more information on Final Fantasy XIII-3: We Swear it's Better than the Last Two, otherwise known as Lightning Returns. When it comes to FF Versus, don't expect anything more than a few "it's not dead" comments. Last Guardian will be another notable absentee in this, our seventeenth consecutive TGS without a new trailer for Sony’s pigeon-snake, dating sim.

There will also be a number of press conferences this week, ahead of Thursday's ribbon cutting. Held separately from TGS, they should serve to whet our appetite for the show proper - last year these pre-events unveiled FFX HD and the Circle Pad Pro! Hopefully, between the lead-up conferences and main event, we’ll get a better feel for new games we're already familiar with and some new announcements to boot.