Don't You Forget About Me 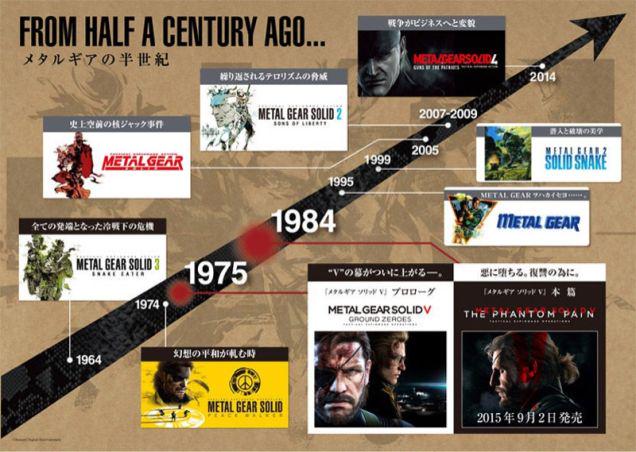 Even for a series veteran like myself, it can be hard to keep track of what's going on in the world of Metal Gear Solid. I struggle to recall who's dead, what the Patriots are up to, who Ocelot's working for and whose arm has been grafted onto whom. Also, which button is grab?

One way of simplifying MGS, thus making it easier to follow, is to ignore certain games in the series. The timeline at the top of this post, courtesy of PlayStation Japan, is an example of this selective approach. It strikes the once-considered-canon Portable Ops from the record, just like the MGSV The Phantom Pain launch trailer did earlier this week.

Released in 2006 for the PSP, Portable Ops follows Big Boss to South America, where he must bring his former FOX unit to heel, because they've gone a bit wrong. It was a precursor to Peace Walker in theme and gameplay, establishing many features that would carry through to its PSP successor and beyond: short burst missions, soldier recruitment, and a gradual shift in morality for our protagonist, Big Boss.

Hideo Kojima did not direct Portable Ops - Masahiro Yamamoto was the man in charge - but he did produce it. To the best of my knowledge, it was intended as a canonical entry in the series, a follow-up to the events of MGS3. Despite this, Portable Ops has long been overlooked, and I wasn't particularly surprised to see it's omission from the series timeline.

I enjoyed Portable Ops far more than Peace Walker, and I'm disappointed to see it thrown in with the "other" Metal Gears, such as Acid, Ghost Babel and bloody Revengeance. The ally recruitment mechanic and its use of Wi-Fi connectivity was inspired back in 2007, a hook that kept me replaying missions and wandering the streets looking for connections to tap. Peace Walker expanded this system, but by then the novelty had worn off somewhat. Continuing the Peace Walker comparisons, Portable Ops had a much more straightforward narrative, at least by MGS standards, and a more memorable supporting cast. Three years removed from playing Peace Walker, and I struggle to recall plot points or characters; those that I can recall, I'd soon rather forget.

With less than a week to go until Phantom Pain, it's fair to say that I have Metal Gear on my mind. I'm counting down the days until my final adventure with Big Boss Snake Jack, and I can't wait to discover how the series ties together (I have my own theories). However, I am wary of a mission structure that appears to most closely resemble that of Peace Walker, and I know that Kiefer's voice will bother me, though I'm still expecting a Game of the Generation contender.

When you're enjoying Phantom Pain next week, be sure to spare a thought for Portable Ops. It influenced the future direction of the series far more than you might think, and was one of the best games on the PSP.