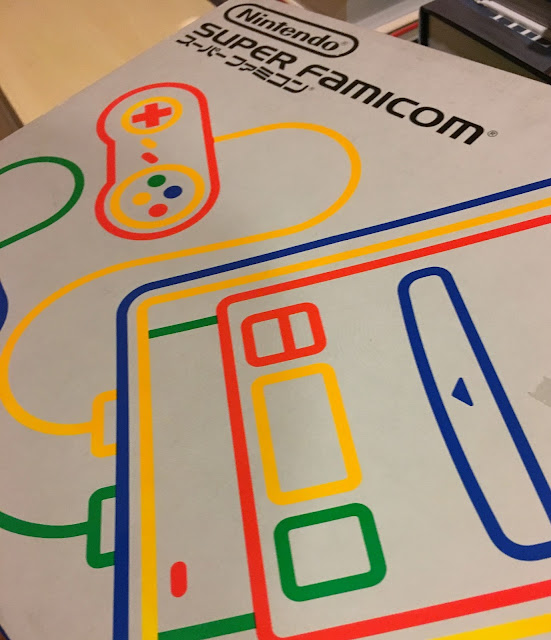 
A box shows that the previous owner cared. They didn't throw it out, have a bonfire or fashion it into a piano. No, they looked after it. They might have even preserved the insides - manuals, bags, warranty cards, plastic ties, unused stickers, shrink wrapped batteries etc. A mummified box of gaming joy. Christ, I need a cold shower.

Just last week, I found myself tempted by a boxed Game Gear. The packaging was in lovely nick, with sharp edges, bright colours, and manuals included. The previous owner clearly loved their Game Gear. Either that, or it was an unwanted gift, thrown into a cupboard and forgotten, its undesirability ensuring its preservation. Anyway, I already have a functioning Game Gear and have no need for another, but that didn't stop me from seriously considering it. I was halfway to the counter before I decided to pass.

I bought my Super Famicom a decade ago, back when the Akihabara, video game Sofmap sold retro games. A better time, before all the other white people bought all the good stuff, and ¥1000 would get you ten Saturn games and leave you with enough change for a helicopter ride home. It was boxed, naturally, complete, and in excellent condition.

There's not all that much I love about the Su-Fami, as I bleed SEGA blue. However, I do rate that box. Simple, iconic branding, with none of the mess that ruined the Mega Drive's packaging. The red, green, yellow and blue outlines jump out from the unassuming grey of the main unit. The side of the box is in solid, bright colours, in stark contrast to the overcast hue of the top. And on the base, nothing but polystyrene. No screenshots, no showing off the software lineup, no braggadocios slogans; just white polystyrene. Just simplicity. Nintendo were confident that you already knew about their games.

Inside, everything is bagged and present. There's no discolouration to the unit, and the controllers came gunk free. Being Japan, the manuals are also complete. Best of all, on the reverse of the manual, there is a stamped warranty card, which provides a little history about this particular console. 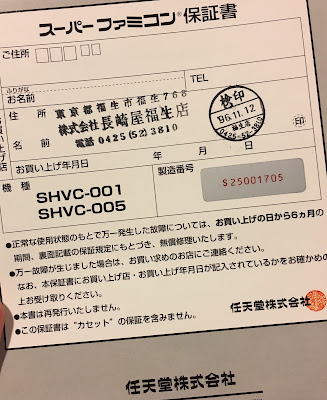 My Super Famicom was first purchased in November 1996, which seems very late in the console's life cycle. The PlayStation and Saturn were already two years old by that time, and Nintendo's own N64 had been released that summer. Was my Su-Fami perhaps a replacement for a well-love and well-worn original? Might it have been an affordable pick up for a family on a budget, or a well-intentioned mistake by a parent, who thought they were buying their child the latest video games player? That could explain why it's in pristine condition - a miss from the get-go, untouched and unloved.


"But mother, I wanted a Sega Saturn! Why must you ruin my life at every opportunity. Do you hate me?"

Or maybe they just really wanted a Super Famicom. It remained a relevant platform well into the 32-bit era, and it always surprises me how much crossover there is between 16-bit and subsequent generations. The Super Famicom was released in November 1990, and wasn't discontinued until September 2003, by which time we'd already had two and half years of the PS2, and two years of the GameCube. Its lifespan covered the rise and fall of SEGA, from the sales heights of the Mega Drive, to the lows of the Dreamcast.

The warranty card also lists the address of the original retailer. The shop was Nagasakiya, a supermarket and discount store that still exists, albeit on a much smaller scale, as part of the Don Quijote family. This particular branch was located in Fussa city in Western Tokyo. A bit of detective work reveals that this location closed in 2001, so there's no chance of me popping in and seeing if they'll exchange it for a 32X.

Here in Japan, it's not unusual to find manuals and warranty cards inside used games and hardware. But I can't say I've ever come across one as revealing or as interesting as this. It's interesting to consider where used, retro games and consoles came from, and contemplate why the original owner bought them. I will stare at my ¥10 copy of Virtual Volleyball and wonder why the fuck anyone wanted to buy that at retail. Were they ill? Were they a Saturn completist, or did they just like volleyball?

Of course, I'll never know, as they are probably dead now. Most likely in a traffic accident.

It's all quite upsetting, really.