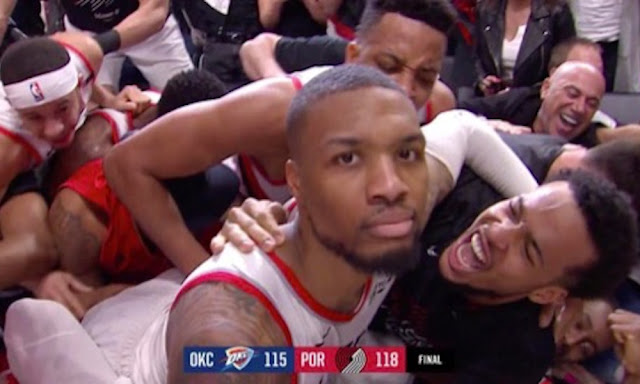 I don't think I've ever seen a shot quite like it. Or at least not outside a video game.

Damian Lillard is, by most accounts, one of the ten best players in the NBA. With apologies to any undiscovered basketball prodigies hiding out in the remotest corners of the globe, that makes him one of the best ten players in the world. Even still, that shot was insane.

His game-winner came from way behind the three point line, from a spot where few players would dare let it fly, and certainly not in the dying seconds of a playoff game. Also, he hit it with Paul George draped all over him. Paul George, 6-9, athletic and one of the most gifted defenders in the league. And just to make it even more challenging, it was a side-step, fade-away three. And he did all this with only seconds left on the clock.

The degree of difficulty was through the roof. It was a video game shot come to life - implausible yet destined to go in.

It's up there with Roberto Baggio consistently scoring from the same spot, just inside the box in FIFA '96. A god-mode strike that led to scores like Milan 19 - 1 Nottingham Forrest. Or that sweet-spot cross in Olympic Soccer - I played all the best football games - that would lead to a headed goal nine times out of ten. I'd click the Saturn's shoulder button, the ball would fly into the box, and my triangular striker would nod it majestically into the back of the net. China seven, Brazil nil.

Lillard's disregard for real-life limitations brought back memories of Shaq in NBA Live '97. O'Neal was an unstoppable force in the paint, powering his way to the basket and dunking everything. More surprising, however, was that he was a deft hand at straight-on threes, a shot he never took in real life. This was the source of many arguments between my brother and I. A Lakers fan, he always went straight to Shaq, and there was nothing that I and my Phoenix Suns could do about it.

And let's not forget Shawn Kemp in the original NBA Jam. He could dunk from anywhere. Unfortunately, it wasn't enough to save basketball in Seattle.

Lillard's performance was the kind you'd expect from a player-created character. Sliders set to 99, silly haircut, stupid name; a half-arsed attempt at a face that resembles mine own. White, with some hair. Put him in a game, and he'll dominate. Have him enter the Royal Rumble at no. 1 and he'll be the last man standing. All hail Super Matt in his purple spandex.

Video games are very nice. Basketball is also very nice. I like it when the two of them come together in unexpected ways.
Contemporary Games