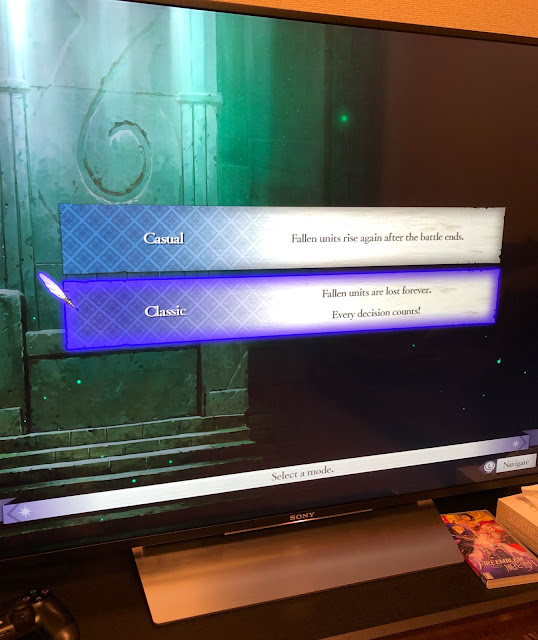 I'm paralysed by a simple choice.

An either or, one or the other; this or that.

I'm sweating. I've been staring at this screen for what feels like an eternity. Fire Emblem Three Houses is already proving to be a very difficult video game, and I've barely even left the intro screen.

Casual and Classic are such loaded terms. I don't want to be casual. In our world, the world of the video game world, it is a vile word. Anyone who knows me would agree that I am classic through and through - I don't even know how to spell casaul.

Fuck, I don't know what to do.

I'm fidgeting in my seat. I put down the controller and look to the internet for answers. According to the experts, you should play on Classic. That's how the game is intended to be played, and they should know, being that they are experts.

I know, I'll look at Twitter for a bit.

Ten minutes have passed. The game still demands that I answer. It refuses to back down.

I cast my mind back to past experiences with the series. I have played two other Fire Emblems - Fates was good but Awakening was the best - and of course I payed them on Classic. Plenty of my units fell in battle, but I'd reset and redo the skirmish until I could complete it with my team intact. It made my game harder, as I wouldn't accept anything but complete survival. However, that all changed in Awakening's final battle when I debased myself and accepted the unacceptable. I let Gregor, the kind-hearted mercenary, perish. I will never forget him.

Seriously, what's the exclamation mark for?

I don't want to go through a Gregor-situation again. I can see it now: my dapper aristocrat or rough-and-ready archer dying young, succumbing to an overpowered spell or an unexpected stabbing. I'll spend tens of hours getting to know them. We'll chat over dinner, do pointless side missions together, hold hands in the library. I will make them strong in body and mind, only to have them taken away from me. They will have the misfortune of falling towards the end of a long and complicated battle, and I will refuse to restart. Rest in peace, my sweet anime prince.

Crap, it's 11pm. Classic it is then.
Contemporary Games