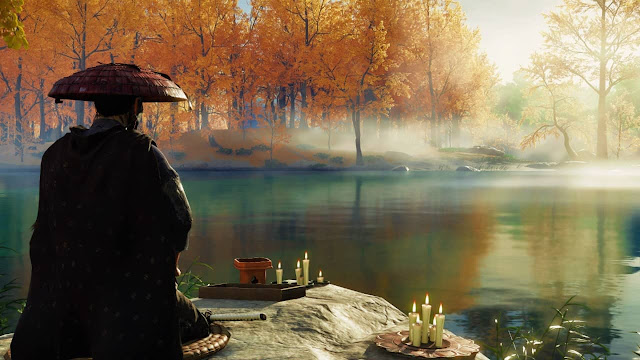 Compose haiku to earn new headbands. Words as wise as they are ancient.

I love how unashamedly video game-y Ghost of Tsushima is. The video game tropes somehow compliment an otherwise serious and thoughtful tale of honor and sacrifice.

As Jin Sakai, we are asked to consider our place in the world, to reflect upon the impermanence of life and the cruelty of man. We are encouraged to revel in the beauty of an idealized and exaggerated rural Japan, made all the more gorgeous by an uncluttered screen, to ponder the change of seasons and the ebb and flow of the tide. Ghost of Tsushima is a quiet and considered experience, albeit one that isn't afraid to give you headbands for poetry or throw you into a thirteenth century turret section.

Usually, that kind of disconnect would be jarring, yet it didn't bother me here at all. In fact, I really enjoyed the contrast. A beautiful game, brimming with brilliant video game nonsense.
In the moonlight,
The color and scent of the wisteria
Seems far away.
Congratulations, you got the headband outta Sly Cooper!
By far my favourite slice of silliness was the first turret section, where you use an 800-year-old missile launcher to rain disturbingly-accurate death upon a feet of Mongolian ships. Apparently, the Mongolian hordes had access to some Call of Duty-esque hardware, which goes a long way to explain their dominance of East and West during the 13th and 14th centuries. They were a ball hair away from inventing the mini gun when their empire finally collapsed.
I know that they are near ubiquitous in modern kill-death games. I accept that they are lazy and artistically derelict, yet I genuinely enjoy turret sections. Always have, always will. I appreciate that moment of absolute power, as well as the risk-reward of spewing powerful projectiles while making yourself a static target for your enemies. A wonderful trade-off and the true evolution of on-rail shooters. They are good things, even when they are hilariously anachronistic.
The Mongolian invaders are very accommodating when it comes to dying. They lugged countless red explosive barrels across the Sea of Japan and aren't averse to congregating around them. Mongols are guaranteed to turn up whenever you learn a new technique, so you can have a practice on their soft necks. They also very much enjoy a bit of Benny-Hill-style running about in circles as they chase Jin between yurts and kegs of gunpowder. A late-game boss battle, set on a ship, was essentially a rerun of the Uncharted 2 Lazarevic showdown. I sprinted in circles for five minutes, pausing only to shoot something explosive. Again, these things pleased me.
And then there is the super-powered Ghost Stance. Enabled when you kill a given number of enemies without taking damage, it turns you into an unstoppable force. The screen goes black and white, or Kurosawa as it is now known, and your foes tremble helplessly before you. They fully shit themselves for up to three sword murders, after which they regain their composure and find a gunpowder keg to stand next to. Again, not complaining; loved it.
On top of all that, there are several thousand shinnies to collect and locations to find.

I really liked Ghost of Tsushima. I couldn't put it down, even after I'd reached the end credits. I loved the setting from the get-go -  a stunningly colourful world in a fascinating historical period. It took longer for Jin and the combat to grow on me, but I definitely got there. A wonderful end-of-gen treat.
Contemporary Games