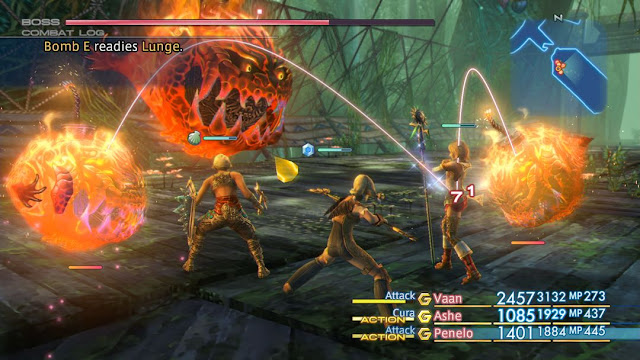 I first played Final Fantasy XII in the spring of 2007. My fat PS2 was hanging on for dear life, drawing out load screens for all they were worth and chugging through cinematics. I played it, I enjoyed it, and then I forgot all about it.
I first arrived in Japan a few months before FFXII's much anticipated launch. I was working in a shitty language school in a town I didn't particularly want to be in, as it wasn't Shibuya. FFXII was a topic of shared interest between some of my students and I. I challenged them to discuss the game under the pretense that it would help expand their vocabulary, when really I just wanted to hear about Final Fantasy and avoid teaching grammar.
I was excited to experience the Japanese launch. There were commercials on TV, huge billboards at the train station, and vile energy drink potions that came in elixir-like glass bottles, available at the convenience store. I didn't consider purchasing the game, as my grasp of Japanese was very basic at the time. Besides, I was accustomed to waiting the best part of a year for English localizations. However, I did buy my then-girlfriend now wife-friend a PS2 slim and a copy of XII for her birthday, in part because I was/am quite fond of her, but also because I wanted to watch her play it.
Around nine months later, my localized copy arrived. Although I enjoyed it, it would be the first new FF that I didn't replay soon after my first playthrough. I'd lost the motivation and the free time that once encouraged me to revisit each entry over and over again. Fast forward almost fourteen years, and I thought I'd remedy that with the Zodiac Age HD Remaster on PS4.
I could still clearly remember Rabanastre and its surroundings, as well as the first few excursions to different locales. However, I could recall barely anything of my initial playthrough after the opening 10-15 hours. In some ways that was nice, as I was getting a fake-new Final Fantasy experience in 2020. On the other hand, it's a damning indictment of the story and characters.
Ivalice is a great setting. I'd be quite content if every FF were set in some corner of that world. The architecture, the inhabitants, the sounds, and that weird mix between medieval grime and Sci-Fi wonder. Yes I'm on a space ship, but I'm also wearing a coat of armour and carrying a mace! The art style has aged wonderfully and I'll never tire of being reminded of Final Fantasy Tactics, the Ivalice grandaddy.
The score, which I believe was tidied up for Zodiac Age, is blissful. It's non-intrusive, but every time you stop to listen you are treated to something special. The battle system was a huge gamble, but I adore it. The Gambit System is malleable enough to allow you to get creative, but not so confusing to put you off. It's up to you how much you want to automate the battles, either putting in the work beforehand or making your decisions in the moment. It works, and is robust enough to support a game within the game - a Monster Hunter-lite set of missions where you must destroy increasingly challenging critters. This is where the challenge lies, and it's easy to get so carried away here that the main narrative drive is all but lost.
With a few exceptions, the cast is unremarkable, especially the villains who just aren't villainous or interesting enough. The pointless back and forth between the hunt board, the petitioner and the mark is an unwanted reminder of peak RPG nonsense. Vayne, the main antagonist whose name I had to look up despite having spent 50 hours in his world, has two final forms. In the first, his muscles get much bigger. In the second, a load of scrap metal attaches itself to his still absurdly muscular frame. Again, peak RPG nonsense.
These complaints aside, I rather rate Final Fantasy XII. It is charming, and is unfairly overlooked when we discuss our favourite Fantasies. It's not VIII good, obviously, but it's well worth a revisit.
Contemporary Games Retro Gaming