The Vita Had No Games, Except These Ones 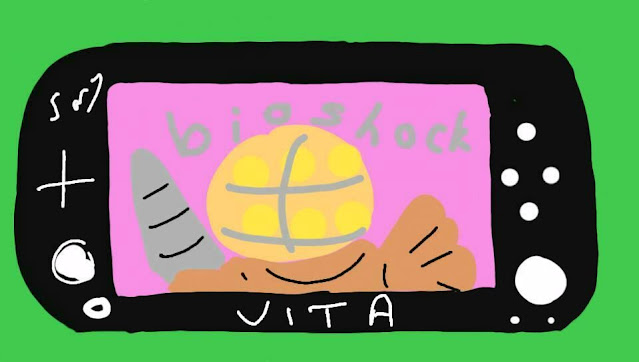 I'm writing a retrospective series about the end of the 8th Generation , which includes a Top Twenty Countdown of my favourite games.
Illustrations by me (37 y/o), created on the Vita's Paint Park app.
As has been well documented, the PlayStation Vita had no games.
Except it did, just not the type we thought it'd have. The PSP had set the template for a high-spec handheld, one that could boast every type of game you could imagine. Crucially, it was home to blockbuster titles from AAA franchises, many of which you could only play on the PSP, at least at that time. Metal Gear Solid Peace Walker, Final Fantasy Type-O and Tactics War of the Lions, God of War Chains of Olympus, several Monster Hunters, and on and on we could go.
When the Vita was first announced, those were the types of games we pictured. It only made sense that such a powerful piece of kit, sold at a premium price point, would be running the biggest games. It would launch with a standalone Uncharted, the announcement of a new Bioshock, and whispers of a platform-exclusive Call of Duty, all of which raised our expectations. That we ended up playing indies, back-catalogue standouts, and hentai filth was a disappointment to many.
The Vita was unloved by it's creator, bereft of games during the crucial first year, and subject to countless delays for services and products that should have been there from day one (full compatibility between console and handheld, access to PS classics etc.).
And don't even get me started on Near.
Anyway, long story short, the Vita wasn't what we thought it would be. However, I came to love mine, and I have an insanely expensive proprietary 64GB memory card full of games to prove it.
Fast approaching a decade since launch, here's what's still stored on my Vita.
In the Cartridge Slot: Lumines Electronic Symphony
Still my favourite original Vita title, and I'd wager my most played. It has been living inside the cartridge slot for several years. Every now and then, the mood will take me to play some Vita, and it's almost always Lumines that I'll turn to. It's not exactly original, but it is the perfect marriage between gameplay and audio. The Vita has at least one game, see?
In the Cartridge Folder: Uncharted Golden Abyss, Person 4 Golden, Metal Gear Solid HD etc.
I didn't buy many boxed games. In fact, it was the first platform where I embraced digital-delivery, albeit largely through necessity. The shelves in my local game store weren't exactly heaving with Vita titles. Uncharted Golden Abyss was a little barren compared to it's home console big brothers, but it was still a very impressive launch title. Persona 4 Golden I imported from the US - an expensive decision but one that I do not regret, as it is a superlative modern JRPG. And any platform that has MGS3 on it can't be bad, can it?
In the Digital Folder: Dariusburst CS, Papers Please, Freedom Wars, Severed, Resogun, Hotline Miami 2, XCOM: Enemy Unknown Plus, Undertale, Sound Shapes, OlliOlli etc.
This folder is positively bursting at the seams. Between PS+ offerings and regular sales on the very user-unfriendly store, I kept adding to my trove of downloads over the course of the last decade. Resogun was of course better on the PS4, but it was also extremely impressive on the Vita. I picked up Freedom Wars during one Christmas sale many years ago, and I'm still telling myself that I'll play it one day, because the prospect of a new IP, Vita-only RPG is still somehow very attractive. I played and greatly enjoyed Severed just last year; in the early days Hotline Miami, Sound Shapes and OlliOlli softened my opinion on low-fi indie games.
In the PSP Folder: Final Fantasy Tactics: The War of the Lions, Sega Mega Drive Collection, Persona 3 Portable, Breath of Fire III etc.
A mix of old-favourites that I wanted to own on my new handheld, and games that I had missed earlier and wanted to try. I have come to accept that I will probably never play Persona 3 and Breath of Fire III, but they definitely look good sat on my home screen.
In the PSOne Folder: Final Fantasy V-IX, Vagrant Story, MGS, Silent Hill etc.
When nostalgia attacks! There were plenty of issues and delays with the promised-for-launch availability of PSOne Classics, but we eventually got there. The Vita is still perhaps the most convenient way to play many of these games, if you're looking for the original experience and not an updated port. I wish they'd have one last sale on these, to clear out the digital shelves before reburying the festering corpse of the Vita, but that'll never happen.
In the PS Plus Folder: Hotline Miami, Thomas Was Alone, Pixeljunk Shooter Ultimate, OlliOlli2, Killzone Mercenary, Soul Sacrifice, Tearaway etc.
I burned through a lot of PS Plus offerings on Vita. That service kept the system relevant long after all the big-name releases had dried up. Mercenary was the last good Killzone, and perhaps the system's most technically impressive game. Thomas Was Alone is about shapes having some feelings, but don't let that put you off, and Pixeljunk Shooter Ultimate is outstanding. Soul Sacrifice is a throwback to the very brief period when we were getting new, big budget games on our handheld, something that very quickly became an alien concept.
You see? Games!
The End of Another Generation