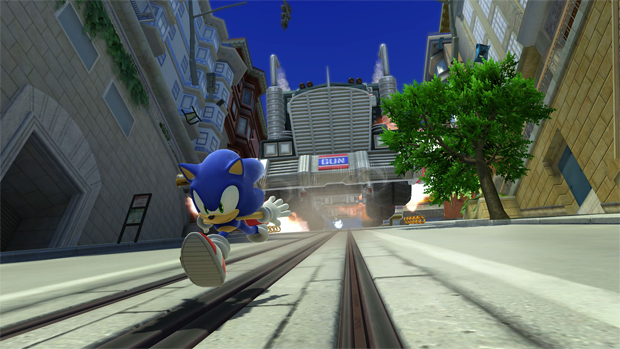 Although I could keep writing about Tokyo Game Show forever, now seems a good a time as any to finally wrap-up my hands-on previews, two weeks removed from the end of the industry days. Over the last fortnight, my TGS 2011 coverage has included:

Unfortunately, I don't have time to dedicate a single post to every single game I played, so a paragraph for a handful of outstanding titles will have to suffice.

Next week, I shall be posting some final thoughts on my trip back to Japan, photos and some games that I picked-up during my trip. After that, there will be a return to normality here at toomanywires, where I will try not to mention Japan for at least a week. Probably.

I hope you have enjoyed reading my TGS coverage as much as I have writing it, and don't forget to let me know your thoughts on the games I covered over the last two weeks.

First off, Sonic looked great running in 3D. For the most part the effect was subtle, but every now and again something would really jump out and make the discomfort of wearing the plastic glasses very much worthwhile. Unfortunately, and as a Sonic fan I do say this with significant regret, the demo had very little else going for it.

Sonic is at its best when flying through levels at breakneck speed, and not having to slow down for tricky jumps and fiddly, moving platforms. The best parts of the demo revelled in simplistic, speedy platforming, but these sections were constantly interrupted by obstacles that brought Sonic to a screeching halt. These roadblocks could have been tackled on the move, if not for the sensation of Sonic having leaden boots and an inexcusable lag between pressing jump and Sonic actually performing the move. I wasn't sure if it was the demo build, or a faulty controller that was to blame - though the journalist across from me seemed to be having similar issues - and I was so frustrated that I couldn't bear to wait around long enough to ask.

I am rather excited by Peace Walker's move to home consoles, as part of the forthcoming MGS HD Collection. Despite being a huge Metal Gear fan, and having bought PW on the PSP, I never got past the first hour. This was due to the fact that I didn't want to experience Snake Eater's spiritual successor on a small screen. I'm happy to report that the port looks great running in HD and the controls have been well mapped to the PS3 controller. You do notice some rough textures, especially in the backgrounds, and the visuals are lacking detail - no more apparent than on Big Boss' ever vacant face - but by-and-large it stands as a remarkable, visual achievement. Fans of Portable Ops and PW will be happy to hear that the comic-like cut scenes have been retained and are as captivating as they were on the PSP.

From a distance, Type-0 (PSP) looked rather promising and served to remind me of how much fun I had with Crisis Core a couple of years back. However, I did not enjoy my brief hands-on, though there were mitigating factors that didn't put me in the best of moods. The PSP area of the Sony booth was hotter than the sun, and the short-cord headphones meant I had to bend down at a rather uncomfortable, 90 degree angle for the duration of the demo. All I really recall of Type 0 is heat, backache, an overly brown palette, simple controls and dull gameplay. I will reserve judgement until I have the luxury of playing sitting down, with air-conditioning, and you are probably best off ignoring my recollections of Type 0 entirely.

There is a lot more to the latest Onechambara than just tits, yet they are what I best recall of the gory demo at the 360 booth. One particular moment stands out when, heading into a loading screen, the action froze, with the exception of our heroine’s sizeable breasts, which continued to bounce up and down until everything finally faded to black. Tomonobu Itagaki would be proud.

Mesmerizing body parts aside, Onechanbara offered up some bloody fights with hordes of the undead - battles which moved quickly as I mashed every button possible. I was able to scroll through three different weapons, all of which needed to be kept sharp, with each suiting one situation better than the next. Stringing together combos quickly became second nature, and I was constantly reminded of their importance by a constant barrage of text across the screen, which included combo names, general information and scores. Together with the blood that is forever splattering the screen, it made for rather confusing and cluttered viewing, though it didn't overly impair my enjoyment.

I'm well behind the times with the Silent Hill series, not having played one since the first game on the PlayStation. From what I saw of Downpour, I won't be jumping back on board any time soon. The demo was very atmospheric, with lots of strange sounds and disturbances coming from the shadows, and there were a couple of moments that made me jump. However, the visuals looked dated, even masked by the darkness that covered most of the level, and the 3D effects were entirely uninspired. The controls were clumsy, with simple actions like running in a straight line proving to be far more challenging than they should have been.

Off the Record is almost identical to the original Dead Rising 2, which was an excellent game. The main change is Frank West, the original DR protagonist, replacing Chuck Greene in the lead role, which affects certain plot elements. Frank feels a little heavier, and slightly more powerful, but I struggle to comprehend the switch and find it rather odd that Capcom have decided that the chubby photo journalist is a character worth revisiting. The sandbox mode was not available in the demo, but there are new challenges spread throughout the casinos and malls that offer experience, though the ones I tried were nothing more than simple zombie herding/slaughtering affairs.

If you have already played Dead Rising 2, I see little reason to shell out again. But if you have yet to get stuck into Capcom's zombie-massacre romp, then Off the Record may well be the place to start.

I only ever seem to play Ninja Gaiden games at TGS, where I always enjoy the experience but am never wooed enough to actually go out a buy it. Ninja Gaiden 3 looked to be no different. The London based demo was exciting, brutal and very cinematic in its presentation. Played on the 360, it looks great and runs smoothly, even when the screen is filled with enemies who were little more than lambs to the slaughter.

There were a couple of nice set pieces, and sliding through and under dangerous obstacles was really enjoyable. However, played on normal difficulty, I couldn't escape the feeling that all I was doing was mashing the same buttons over and over, pausing occasionally to unleash a special, dragon attack. With the exception of a tricky climbing sequence, I would probably have fared just as well had I only glanced at the screen intermittently.
Tokyo Game Show '11