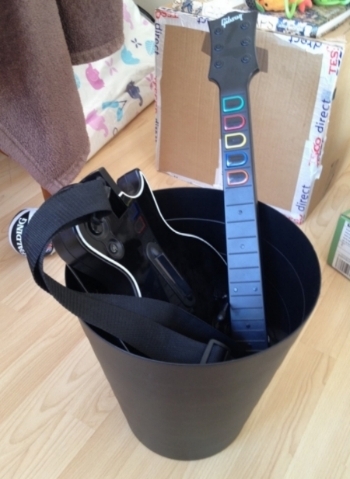 DVD collection, you are cut.

Sofa, get in the skip.

As much as I'd like to bring all of my belongings to Japan, I simply can't. Shipping boxes are expensive, and those we can afford are better off filled with clothes and other useful household goods, or so I'm told. With that in mind, we had to have an almighty clear out. Our bins are overflowing, our local charity shops are well stocked and larger items have been offloaded/forced onto relatives.

My video game collection has not escaped this purge. Some things have been thrown away and I've Ebay-ed a couple of unwanted items, though I have managed to retain the bulk of my collection. However, less than half of it is coming with me to Japan; the remainder has been stored away, awaiting a reunion that may be a few years off.

Here are some of the cuts and keepers.

Cut: PS4
Don't worry, I haven't gone mad and bought an Xbox One. I am, however, planning on selling my launch PS4. It's about due a catastrophic malfunction (thanks, Sony Timer), so I'd like to get out while I'm ahead. Once I'm in Japan, I'll buy a newer model and spend the rest of my life trying to remember that X means O. It's an upgrade, and one that saves me from having to haul my console of choice through airport customs. It's not ideal - I'll most likely be PS4-less for the Dark Souls 3 and Uncharted 4 launches - but I'll get over it, eventually.

Keep: Current-gen Games
All my PS4, Wii-U, Vita and 3DS games will be accompanying me to Japan. I was unsure about taking my Wii-U, but I want to try and finish Xenoblade Chronicles X and I do like to have a second home console, no matter how unloved it may be. The Vita and 3DS will gain the most from our move, as I'll be in need of entertainment on my daily commutes.

Cut: Guitar Hero guitar
6th March 2016: the day the music died. This one went straight in the recycling bin, another rhythm game peripheral returned to the ground.

Keep: Wii
Not sure how this happened. I think I just panicked.

Cut: Sega Dreamcast
It's just a less interesting Saturn, with an abomination of a controller. Besides, my daughter already covered it in stickers and claimed it as her own.

Keep: Sega Saturn Collection
This was never in doubt. I look forward to adding to my treasure trove.

Cut: Majority of my PS3 Collection
I'm bringing a select few titles, but the vast majority of my 150+ collection is staying behind. My last gen selection makes a convincing argument for going all-digital this console cycle - I don't want to be stuck with a similarly huge collection at the end of this gen, an abundance of games that I'm reluctant to part with, yet have no intention of ever playing again. If the price were right, I'd go all-digital today, but it's not, so for now I'll keep accumulating discs and plastic.

Keep: Virtua Boy
Because it's a great conversation piece for all those house parties I never have. It’s something to dust off when my imaginary friends pop round to compliment me on my wonderful game collection. "Have you ever played a Virtua Boy?" I'll ask. "It's shit." I must have it.

Cut: Alien Colonial Marines Special Edition
Bin, bin, bin, bin. Or for my American friends, trash can. Basically, what I'm saying is that I threw it away, into a bin.

Cut: Everything PS2
The PS2 is my lone home console from my least favourite generation. There were some great games (MGS3, Timesplitters, RE4, God of War etc.) but my interest in stick-twiddling was at an all-time low in the early-mid 2000s. Devoid of nostalgia, leaving the PS2 behind was an easy decision.