Where the Grass is Green & the Girls are Pretty 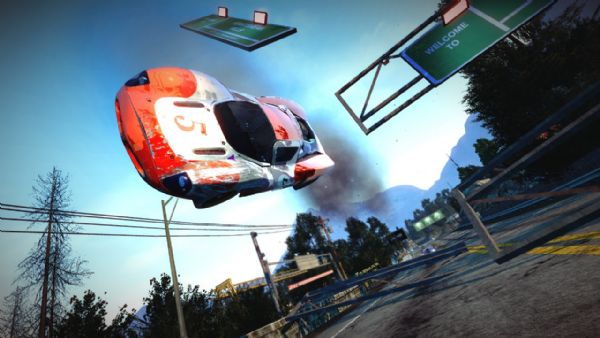 I was spoilt for choice over the holidays. I had a pile of new games which I intended to plough through over Christmas and New Year. I thought I’d race through Titanfall 2 and play online with friends; I was sure I’d get a good way through Yakuza 6, put a dent in Dead Rising 4 and also try a couple of the PS+ games that were wasting away on my Vita.

With the exception of Titanfall 2, which I finished, I spurned them all in favour of a game from 2008. A nine year old, backward compatible racer running on my Xbox One. One of the finest games of the seventh generation, and still the best in its class. I played a lot of Burnout Paradise and I have no regrets.

I originally played Paradise on the PS3, back in 2009. It was love at first sight, and I played it on and off for the best part of a year. It was one of the first games I played online, as I raced around Paradise city with friends and strangers alike, and it ended up as one of my favourite games of the last gen. It was on offer last month as part of Games with Gold, and I jumped at the chance to start again from scratch, eight years removed from my first playthrough. As expected, I’ve fallen in love all over again.

Burnout Paradise has aged gracefully. The city still looks beautiful and the controls are simplistic perfection. The standard-setting, online elements still impress, and the process of jumping between single and multiplayer remains simple and intuitive.

As a setting, Paradise City has yet to be bettered. The cars play second fiddle to this wonderful and varied playground. There is so much to do and I’m enjoying seeing achievements pop anew, resetting road rules and making my way through the licenses. It is a simple joy burning through the city, smashing billboards, obliterating fences and flying off jumps, slowly crossing off hundreds of mini challenges that are scattered across the map. There’s an event at almost every crossroad and countless challenges, real or imagined, in the spaces between. It’s constantly recording, tabulating and comparing times and scores, and I only wish there were more people on my friend list returning to Paradise for me to compete against.

I love the simplicity of the events – broadly broken down into races, time attacks, stunt runs and takedowns – and how easy it is to see which cars should be used for each. The stunt runs are probably my favourite, as they are brilliantly executed. In racing games, stunt-based events run the risk of being too stop-start, but Burnout avoids this pitfall. Each jump flows into the next and you are allowed to build up speed and maintain momentum – no need to worry if you miss a window for tricks as the next opportunity will quickly present itself. I like the short and sweet nature of the races, and although the takedown events are a little easy, it’s great fun forcing racer after racer off road and into a wall.

Playing today, the lack of a GPS-style system sticks out like a sore thumb. Racing out to an early lead isn’t always the best idea, as it’s so easy to miss turns when there are no cars in front to follow. This becomes an even bigger problem as you gain access to faster cars and have even less time to react to the minimal, on screen indicators. On the other hand, it encourages experimentation, as you feel more inclined to head off road and look for shortcuts, which is where the real fun is to be had. The music selection is a bit shit and the custom soundtrack option is sorely missed. Having recently played Forza Horizon 3 with its near indestructible cars, I have mixed feelings about car damage and having to sit through wrecked animations. Still, in a game this special, I can forgive such minor annoyances.

Eight years has done little to dampen my enthusiasm for Burnout Paradise. It is everything I want in a racer and I just can’t put it down. In an attempt to prolong the experience, I’ve repurchased the outstanding Big Surf Island DLC and have guaranteed myself at least a few more hours of billboard destruction. I guess that pile of new games will just have to wait a little longer.
Contemporary Games