An Evening of Monster Hunter World 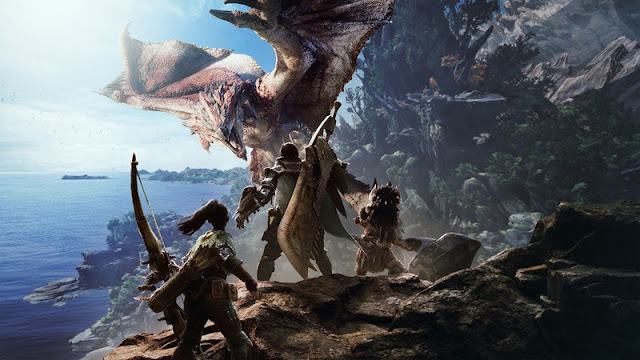 I'm in deep, having played 40+ hours of Monster Hunter World in just three weeks. That's a lot for me, so back the fuck off.

It's great that the series has finally been freed from the limitations of the 3DS. All the familiar hooks, and frustrations, are still there, but this time it's prettier and easier to control. I'm very happy indeed.

I've tackled some quests solo, but I've mostly been playing with friends. We are expert hunters, as you'll see.

Me: Hey everyone. What level are we now? I'm HR 14.
Friend A: 12
Friend B: 16, but <white noise>
Friend C: 86
Me: Fucking hell <name redacted>. How'd you manage that?
B: Are you wearing a golden skull? Where'd you get that from?
C: I killed seventeen Black Diablos on Saturday. Only took eight hours.
Everyone: Nice.
A: Do you guys mind if we do the Rathian hunt? I need to get the Plate for some armour. I've already fought him six times, but no luck so far.
Me: Stingy bastard. Sure, set it up.
A: How do I do that?
C: Done. Join as soon as possible.
B: And don't forget to eat.
Me: Give me a minute. My daughter's colouring the floorboards.

Me: Right, the Rathian'll be at the top of the forest. Can anyone remember how to get there?

A: Fuck, we've already been this way. Why do all these paths look the same?
Me: This Rathian prick's the size of a Double-Decker bus. Where's he hiding? Is he invisible? Can they do that?
A: Probably.
C: No, you're thinking of Predator.
A: No I'm not.
B: I'm thinking about your mother.
C: ............
Me: There she is. I've got the tail.
B: I'll take the legs.
C: I'm going to break its face.
A: I'll fight the dragon.
B: Guys, quickly..... <sounds like a Coke can rubbing up against a cheese grater>.
Me: Why is <name redacted> running away? Come back!
C: Eyes on the Rathian; she's staggered.
A: Let me at its soft, pink belly!
Me: Your tail is mine! Give it up, Rath.
A: Fuuuck, I'm dead. What the hell happened?
C: What's that awful sound?
Me: Oh no, it's the explody cunt! The one that flies and explodes. The flying, explody cunt! Run!!
C: It's called a Bazelgeuse. Let's regroup outside the forest.
B: I tried to warn you guys. You really don't want to try and fight a Rathian AND an explody cunt at the same time.
C: Bazelgeuse.
A: Hello? I'm back at the Rathian, but he seems to be preoccupied. Where are you guys at?
Me/B/C: NOOOOOOOOOOOOO!

**One more death, a severed tail, a broken head and fifteen minutes later**

Me: Nice, I got a Rathian Plate!
C: Yeah, me too. Another to add to the collection.
B: Ha! I got two.
A: Fuck. I got a dozen useless Scales. I'll never get that armour!
Me: See you guys tomorrow night, then?
A: Sure.
C: Of course.
B: <inaudible>.
Me: Outstanding.
Contemporary Games Monster Hunter