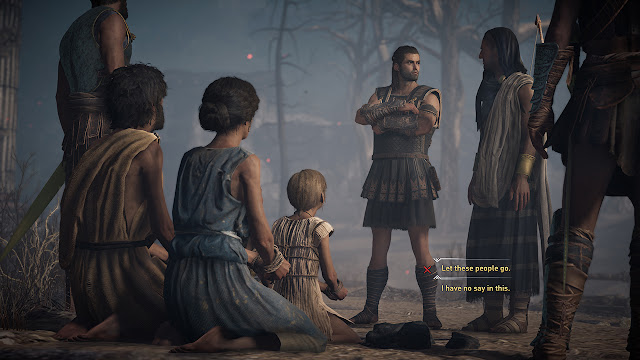 In a plague-ravaged village, a family of survivors kneel, bound, before their would-be killers.

They are a young couple with a girl, about my daughter's age, and a son, a little older. They are quite adamant that they don't want to die. They plead for mercy and appeal for aid; a priest and his two executioners wait to see if I will help the family or turn my back on their desperate pleas.

Should I kick-off or should I piss off? Do I intervene and protect the defenceless family or do I leave them to their fate. The decision is not as simple, not as black and white, as it would seem.

The village has been consumed by the plague. In a effort to prevent it from spreading to the other settlements on our beautiful island, the local priest and his lackeys have taken it upon themselves to put the village to the torch and the villagers to the sword. They have cornered the final family and are about to cut them down when I turn up in my fancy sandals and man-skirt. "Will you prevent us from doing our divine duty", asks the priest. "Don't leave us here to die", pleads the father as his children stare despondently into the camera.

I want no part of this, but I know I have to make a decision, so I break it down.

Leave the family to their fate

+ They are very plague-y. The father swears he doesn't have the plague, but that's exactly the kind of thing you'd expect someone with the plague to say.

+ The family are a little too whiny.

+ I can barely watch TV commercials with young children in without starting to tear up, so there's no way I want to any part of the murder of two primary-schoolers.

+ Murder is bad, even when it's slightly justifiable.

+ They seem nice. The mum is kinda hot too.

This is awful. I genuinely don't want to make this decision. Why are children made of pixels causing me this much anguish?

I decide to check the internet and see the results of both decisions. This is cheating, as in the 5th Century BCE Google hadn't been invented yet. People of that era relied on books, "gut feelings" and early versions of Encarta for knowledge and advice.

Google is very clear that I should leave the family to their fate, unless I want to unleash the plague on the entirety of my home island. Even knowing this, I still can't bring myself to do what I know I have to do. I put the controller down and do something else for ten minutes, every second of which I'm consumed by this stupid decision in a fictional world that in no way affects my real-world existence.

I come back, I take a deep breath, and I tell the priest that this is none of my business.

Three days later, and I still can't stop thinking about this simple decision. Video games are weird like that.
Contemporary Games