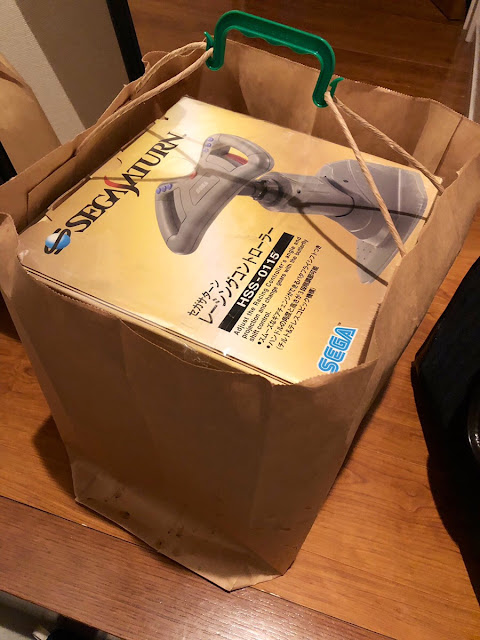 That was all they wanted for it. A boxed Sega Saturn Arcade Racer Joystick for the cost of a pint.

As with most used electronics here in Japan, it was in excellent condition. Boxed, bagged, and with instructions - near pristine. The epitome of Japan-used. I wanted it, but I didn't want to lug it around all day and then have to take it on a rush-hour train.

You see, I was shopping during my lunch break. Suited and booted, rummaging through boxes of old games dressed in my finest; the dapperest bargain hunter that you ever did see. Quite the spectacle in Akihabara, where most of the visitors can hardly dress themselves and, if they can, they're probably wearing a hideous anime t-shirt (Japanese) or a shorts-and-massive-rucksack combo (white people).

I wanted it, but it was impractical. So I walked away and spent most of the afternoon regretting my decision. That is until I remembered that I was going home via Akiba that evening. So I went back and bought it, and braved the 18:00 Chiyoda Line with a box the size of a 90s microwave.

I can say with some confidence that I was the only commuter navigating the rush hour that evening with a massive Saturn peripheral. The shopping bag didn't fully cover it, so I had to hide the exposed top with a scarf to avoid being judged by my fellow commuters. I'd rather have them think I'm smuggling some vile sex toy purchased from a filthy Akiba smut dungeon, than know the truth about my kink for mid-Nineties plastic.

And I've been buying a lot of that of late. I finally picked up a CRT TV earlier this month. I now have my Saturn permanently hooked up and have started to play some of my 150+ Saturn games, instead of just staring at them longingly.

Barely a day removed from receiving my dusty old CRT, I invested in a Virtua Gun. I already had a pair of light guns, but they are doomed to forever remain in the UK. I just can't be arsed with bringing them to Japan and potentially having to explain myself when they show up on the airport's x-ray machine.

Anyway, there's more to this story than just buying another piece of gaming junk.

I first got a Saturn for Christmas in 1996. It was a meaty bundle but heavily discounted, as the system had already died on its arse. Console, extra controller, memory card, steering wheel, Sega Rally, Virtua Fighter 2, Alien Trilogy and Olympic Soccer; I was a lucky boy. I loved my Saturn, but the new releases soon dried up. I had to jump ship and buy a PS1, selling my Saturn for a pittance to partially fund my purchase. I re-bought a Saturn a decade later when I first moved to Japan, and went about replacing the games I had once enjoyed. Twenty four years later - fuck me I'm old - I've added the final piece.

Honestly, it's a pile of shit. It's overly sensitive and weirdly shaped, just like me, but using it to play Sega Rally and Panzer Dragoon has brought back a flood of memories. Between this, Virtua Cop with my Virtua Gun, and the slew of games I'm playing on my CRT (Policenauts and Super Puzzle Fighter are getting the most attention) it's nice to have access to my Saturn again.

When we were living in the UK, I enjoyed having an old TV and a few retro consoles set up and ready to go at a moments notice. Doing that here in Japan helps me feel more settled, in a way. Little comforts like this make our life here seem less transient. Little commitments, to large pieces of plastic, can make a big difference.