The End of Another Generation: I am Doing an Install 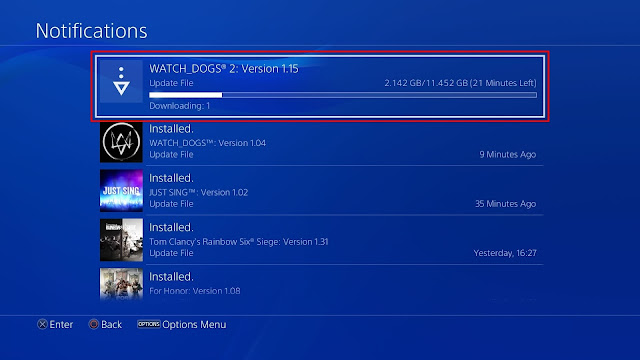 I'm writing a retrospective series about the end of the 8th Generation , which includes a Top Twenty Countdown of my favourite games.
Back in the day, the only things we had to worry about when we bought a new game were getting the shrink wrap off without cracking the case, familiarizing ourselves with the controls by skim reading the manual on the car ride home, and maybe having to delete our NBA Live `99 season to free up slots on our solitary memory card.
Not anymore though. Not now that we've got got increasingly massive compulsory installs and day-one patches to contend with.

Lengthy installs and patches are nothing new, of course. We've been doing them since the PS3/360 days, but we didn't used to have to plan around them. I didn't need to think ahead and insert the disc hours before I wanted to play it.

Red Dead Redemption 2 might have been a sixty-hour game, but at least seven of those were the install.
Games do seem to install far faster on our new consoles, which probably has something to do with ray tracing or Jim Ryan hating old things, I'm not sure. Regardless, it's certainly something to be grateful for.
Anyway, please follow me back into time, all the way back to 2018 or thereabouts. Back to the olden days. I have a new game for my Sony PlayStation 4 and I want to play it.
19:00 - There's a lovely new game waiting for me in the post box. I rip open the envelope, tear off the plastic wrap, crack open the case and breath deeply of the new disc aroma.
19:01 - My wife saw that. I'll just tell her my nose malfunctioned.
19:02 - "Yeah, I've got a problem with my nose."
19:03 - Powering up the console. Christ, another system update. How?
19:30 - Update is done. Disc is in the system, whirring away. The install and patch is going through the motions. No estimate as to how long it will take just yet, but I'm sure it'll be reasonable. I'll step away, get the washing up done, get my daughter to bed, and then it'll be time for a new video game.
19:35 - Is that a helicopter outside? No, my mistake. It's my PS4 doing work.
21:00 - Wife is watching some Netflix documentary about murder. I'll sit here and silently protest her hogging of the TV. Shouldn't take long.
22:10 - He's clearly guilty. Look at his fucking hair.
22:50 - Finally! Let's video game.
22:51 - Seventeen hours remaining for the patch download! How is that even possible? I don't know who to be angry with - our shitty internet provider, the developer of this game, or this fucking awful PlayStation infrastructure. None of my other consoles take this long to do things.
22:53 - I guess I'll just play Switch instead. The baby console, for babies. I'll grab Skyrim, the baby version.
22:54 - What do you mean the Joycons aren't charged? You mother...
22:55 - OK, Xbox One to the rescue!
22:56 - Yeah, we don't have any AA batteries. Brilliant.
22:57 - I'll check my PS4 again, just in case seventeen hours have passed.
22:58 - Now it's saying five hours remaining. Hmmm, this timer is more than a little suspect. Maybe I'll just fire up the game and see if anything happens.
22:59 - It's loading! It's doing stuff. I can see actual things on the telly. Publisher's name, yes! The developer, yes! Something about an engine, yes!
23:09 - Yeah, been stuck on this black screen for ten minutes now. I know, I'll look through my trophy list to burn some time.
23:14 - Got that Platinum in October 2009. Man, Uncharted 2 was amazing. Such a good time.
23:15 - Great, I'm crying at trophies. Memories + the haunting PS4 dashboard music is too much of an emotional mix at this time of the evening.
23:30 - Forget this, I'm going to bed. Got to get up early tomorrow.
05:50 - What do you mean you encountered an error?!
Should've just played Sega Saturn.
The End of Another Generation