My Favourite Games of the 8th Generation: 7-6 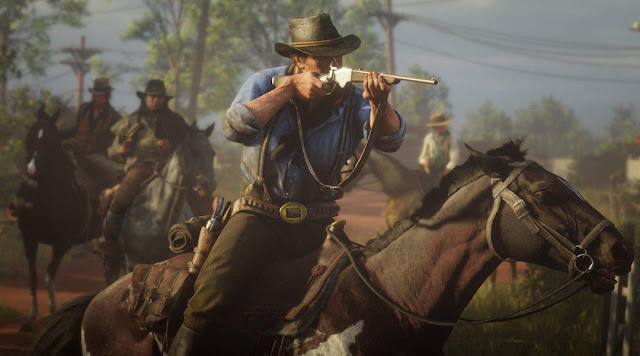 I'm writing a retrospective series about the end of the 8th Generation , which includes a Top Twenty Countdown of my favourite games.
The Countdown Rules.
20. Forza Horizon 4
19. Mario Kart 8 Deluxe
18. The Legend of Zelda: Breath of the Wild
17. Yakuza 6: The Song of Life
16. Mafia III
15. Undertale
14. What Remains of Edith Finch
13. Ghost of Tsushima
12. Assassin's Creed Odyssey
11. Death Stranding
10. Fire Emblem Awakening
9. Monster Hunter: World
8. Metal Gear Solid V: The Phantom Pain
7. Red Dead Redemption 2
6. Uncharted 4: A Thief's End
This 8G countdown is in large part a reflection of how games have faired in my head, how they've lingered on in my mind long since they went back on the shelf. This ability to stay with me is almost as important as my initial impressions. Red Dead Redemption 2 (2018) is a supreme lingerer, a slow-burn in-game and out.
The reason why it has retained head space, while several hundred other games are vying for attention, is the Van der Linde gang.  They are a memorable collection of misfits adrift in an unforgiving time and place, brought together and then driven apart by the charismatic Dutch. We buy into that charisma, at least initially, and we see the dangers of a magnetic personality on people desperate for a sense of belonging. He is manipulative and violent, a false prophet, yet you want to stick with him, to impress and somehow guide him back toward a more righteous path.
Arthur is initially a far less interesting personality than Dutch, though he grows into the role of protagonist. He's a blank slate for the first twenty hours, an avatar through which you'll learn about everyone else. Charles, Micah, Hosea, Sadie - these are outlaws you want to get to know. Once you've met everyone, Arthur is allowed to grow into his role and by the end he proves to be a worthy focus, even with John Marston waiting in the wings.
I was surprised by how prominently Marston, our lead from the first game, is featured. The epilogue is his alone, and is as long as some standalone games. I was impressed by how well Rockstar handled the transition from Arthur to John. Ultimately, we know who John is and we know that Dutch is still around a few years later, and that Arthur is not. The inevitability of what will happen doesn't dampen the impact of the story. Rather it adds a sadness that permeates the entire game, one that befits the setting of a frontier in decay.
As with the first game, I appreciated the wide open spaces. Not every part of the map has a reason to exist, yet exploring those spaces beyond meaning is hugely satisfying. Transit is slow and hard-going, a perfect match for a story that rarely gets beyond a canter. In this indulgent expanse, the focus is on a tiny band of men and women. A group who, in the grand scheme of things, are of next to no importance. Once they are gone, they'll be well and truly forgotten. They will have made no mark on the world in which they are eking out an existence. Yet for those sixty hours, they meant everything.
While Red Dead Redemption 2 may not offer the immediate gratification of GTA, I'll remember it far longer and far more fondly. 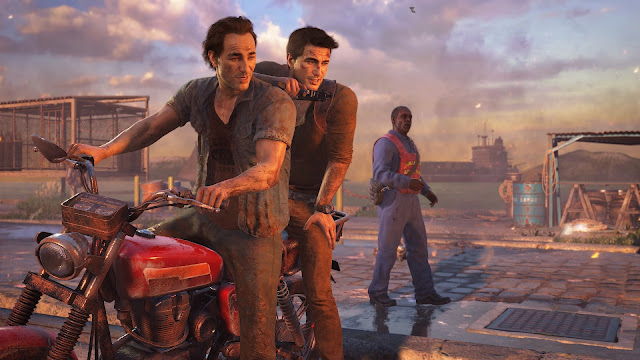 Uncharted 4: A Thief's End (2016) might be the third or even fourth best Uncharted, but don't that let put you off.
Back in 2013, I picked Uncharted 2 as my game of the 7th Generation. No regrets there. My love for it has only grown since, and it very comfortably sits in my all-time Top 5. Uncharted 3 was a corker, and Drake's Fortune was a watershed moment for me and my PS3, my PS3 and I. The Lost Legacy was a lovely little surprise, and Golden Abyss was a charmer, albeit a limited one. Uncharted makes me smile; it is joyous. I can't get enough of that formula, of those characters and of their adventures together. It doesn't matter how many times the floorboards predictably give way or Nate lets riches slip through his fingers, I will not tire of Uncharted.
Please keep making them, Naughty Dog.
If I'm honest, at first blush I was a tad disappointed by A Thief's End. I was holding it to impossible standards and was looking for signs of slippage which, to be fair, are present. However, I grew to appreciate it, and a replay last year cemented it as one of my favourite games of the last gen. Featuring a global treasure hunt for pirate gold and the lost colony of Libertalia, which you of course get to explore, it is very Uncharted. All the series' staples are here and in plentiful supply: treasure hunters, mercenaries, good-natured mass murder, archeology with a bulldozer, breathtaking set pieces, and all the human elements and relationships that make this series so special.
Without overthinking it, I'm going to say that Nathan Drake is the best video game lead of the last decade or more, and he's in fine form here. We explore his and our obsession with lost cities and fool's gold, far deeper than ever before. In Drake, we find a man who is lying to himself and those around him, in an attempt to keep those dear near. He knows who he is, and to be fair so does Elena, yet he continues to deny his calling. That is until his brother, Sam, turns up. A brother that was presumed dead, and the in-law that Elena never even knew she had. Sam is the ultimate bad-news-good-news insert, and I really liked the dynamic between he and his younger sibling, as well as the hint of a sour relationship with Nate's surrogate father, the ever-entertaining Sully. Part of what has made Nathan Drake so interesting is the quality of the people around him, and that's no different here.
He and Elena at home is an obvious standout, from the loft full of memories to some couch-based teasing. The ending grew on me in a way that I thought it wouldn't, and petty much any scene with Sully in is one that I will enjoy. The two Drakes catching up after years apart, with some selective reminiscing about the games that came before, also stands out, as does our discovery of the founders of Libertalia gathered around a rotten banquet. I felt that shared moment of excitement, of history coming to life, with our treasure hunters. And then there are the louder moments, like the car chase through a Madagascan city, the prison escape, the Italian job gone wrong, or the countless sessions with friends doing laps around the survival mode stages. Whether it's going loud or keeping quiet, Uncharted 4 knows how to get your attention and keep it.
I truly hope we get another Uncharted. These characters and their escapades are too good to leave behind.
The End of Another Generation