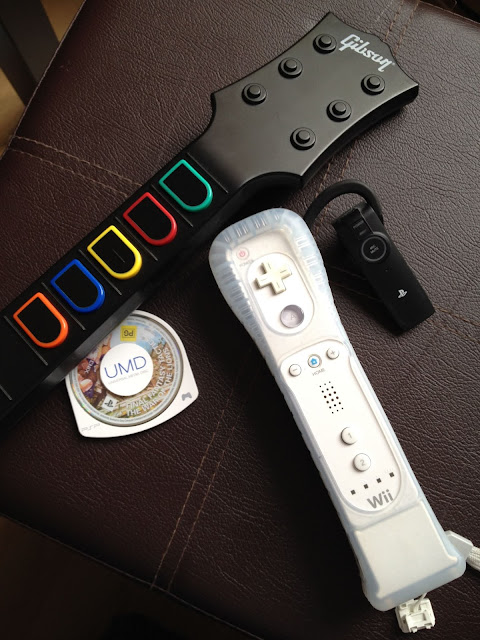 The guitar controller is an icon of the last generation. Living room rock stars spent a fortune on plastic instruments, and no house party of the mid-to-late 2000s was complete without a couple of rounds of Guitar Hero or Rock band. These two series were worth a fortune to their developers and publishers, who were understandably keen to cash-in on unprecedented demand for cheaply made peripherals. The market was soon flooded and the bubble eventually burst, all but killing off the rhythm game genre.

There are few things more seventh gen than the guitar controller. It was expensive and faddish, the height of publisher greed, yet it reached and appealed to an audience far wider than the average video game. The Rock Band/Guitar Hero guitar was a peripheral of its time, and I wonder whether consumers will be willing to re-embrace it when Guitar Hero and Rock Band are re-launched later this year.

Looking through my game collection last night, I was inspired to grab a few items that, like the guitar controller, represent themes and features that defined the last generation. The first, and by far the most important item I chose is the Wiimote. It's impossible to measure the effect this remote had on the industry, but it must’ve generated billions of dollars in revenue. Even your grandma could swing a Wiimote, and she actually wanted to as motion controls removed the barrier of the traditional controller. In a game like Wii Sports, you only needed to perform actions as you would in real life, swinging and twisting as if you were playing tennis, golf or smacking some guy with a kendo stick. Nintendo were the big winners of the last generation, thanks to a simple yet inspired controller that had the rest of the industry playing catch-up.

The next item I grabbed was a headset. It represents the shift from offline to on, a defining feature of the 7th generation. For me, video games had once been a relatively solitary experience, but that all changed once the PS3 arrived. I was playing Resident Evil 5 online co-op, racing through Paradise City with other people with daft names, and playing hundreds of matches of Battlefield 1943. It wasn't all fun and games of course, as online griefing became commonplace and foul-mouthed teenage boys emptied more than a few CoD lobbies with their antisocial behaviour. Even still, online connectivity had a hugely positive effect on the 7th generation and I embraced it far more than I ever thought I would.

Moving on, the UMD was indicative of Sony's last-gen hubris, which saw the Japanese giant slip from pole position to a distant runner-up in the console wars. A proprietary media format that Sony was already trying to escape within the PSP's lifetime (see the PSP Go), the UMD was one of many ill-advised and costly decisions they made during the mid-to-late 2000s. Even at the time, I remember thinking how odd the UMD format was and wondering why Sony wanted to revive the mini-disc.

There should have been an HDMI cable in my picture, to represent the switch to high definition gaming, but the last thing I wanted to do was write about a cable. Instead, I'll finish with something I can't pull from my shelf and pose in a picture: the achievement/trophy. The PS trophy in particular was a huge part of my 7th gen and is a feature that I believe will live on for many more generations to come. It changed how I approached games, and encouraged me to play my games more than once, and I still enjoy earning those lovely shinnies.

If you like the NBA and/or me, you might be interested to hear that I have started a new blog called Holding Court, just in time for the playoffs. I've been following the NBA for almost twenty years and I'm looking forward to having a go at writing about something a little different.

It won't affect my output here at Toomanywires, and there won't be any crossover of content between the two sites, so feel free to ignore it if basketball isn't your thing. However, if you are interested in the NBA, then please do check it out. Cheers.
Contemporary Games Retro Gaming