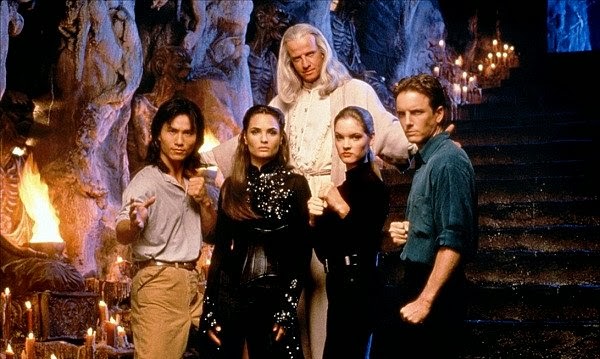 I couldn't give a toss about Mortal Kombat. Even as a bloodthirsty youth, I saw right through the spine-ripping and head popping fatalities - I knew it was krap and was far happier mashing my way through Street Fighter 2. Now, as a fully adult man, I still cannot think of anything less appealing than playing Mortal Kombat, and I have an excellent imagination. Whenever a new game in the series is announced, I do my best to ignore it.

Mortal Kombat is one of a handful of major series that I choose to tune out. I will skip pages, ignore tweets, fast forward through podcasts and end friendships in an effort to steer clear of them. It's not that I hate these games, at least not all of them, I'm just not interested in giving them the time of day. Unless of course I'm short on topics for a blog post, in which case I'll happily throw five hundred words their way.

Mortal Kombat might have improved since the mid-90s, but it still looks like it has been designed by a fourteen year old boy and/or David Jaffe. I'm not the biggest beat-em-up fan, but if I’m going to play a fighter then it'll be one with a sense of style, something that I'll enjoy looking at whilst getting my arse kicked.  I'm just not prepared to wade through all the unpleasantness in search of whatever it is that has kept the series popular all these years.

I have no such disdain for Super Smash Bros., but I'm equally as disinterested in it. I played a Smash game on the GameCube - I'd Google the name but I don't care - and haven't bothered with the series since. The Wii U-owners on my twitter feed seem rather pleased with the latest console version, and I understand that there is an active competitive scene, but you won't find a copy in my Wii U. I've never cared for arena fighting games, but my disinterest in Smash is mostly due to my indifference to, and lack of nostalgia for Nintendo characters. Put Alex Kidd on the roster, and I'd be smashing shit up daily, but Mr Mario and the Super Kirby Brothers just don't do it for me.

While we are on the topic of Nintendo, what the fuck is up with Amiibos? Grown men are raiding toy shops in search of these relatively ugly figures which, from what I can gather, offer very little of value when used in-game. I probably shouldn't judge, as I have bought my fair share of silly video game merchandise, but I'm sure that I will never add an Amiibo to my collection. Another thing I'm highly unlikely to ever buy is a Pokémon game. I've always avoided the series, despite my love of RPGs. The Pokémon boom came just a bit too late for my generation - I'd already moved on to Metal Gear Solid and gangster rap - and I've always viewed it, perhaps unfairly, as being too childish. I'm probably missing out, but I can't play everything.

Unlike MK and Smash, Battlefield is a series that I should enjoy, yet I choose to ignore it anyway. Even at the height of the FPS boom and my shooty-game playing days, I was content with just one annualised shooter; Call of Duty was my game and Battlefield never got a look in. Had Hardline been a bit more Starsky and Hutch and less World War 3 with police, I might have considered giving the series a chance. Or not, as my interest in the FPS genre has reached an all-time low.
Contemporary Games