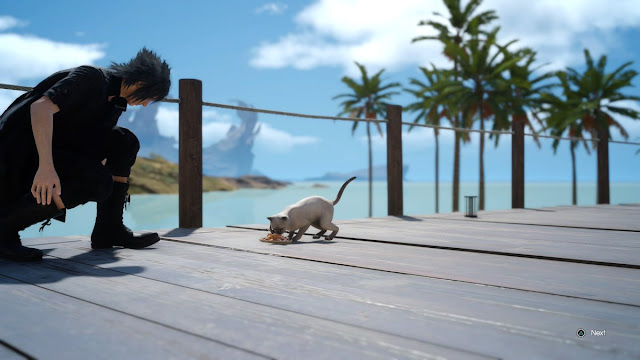 I was minding my own business. The English guy with the hair was sharing recipe ideas, muscles was grunting and the little one was attempting some banter, and missing by a mile. Business as usual for Final Fantasy XV's superfriends.

I was minding my own when a cat decided to give me a side quest. Me, Nigel, the heir-apparent of a kingdom I know nothing about, who's traveling to a funeral or something with some other guys in a car. I'm in a real rush and this cat's all up in my face.

A wedding! The boys and I are going to a wedding, possibly mine, though I'm not sure which of my buddies I’m marrying.

Anyway, this cat. He knows I can't resist a quest-giving animal, no matter how much of a rush I'm in, so he plonks himself in my path and waits. A fluffy roadblock, stuffed with XP. He knows I'll approach and press X to interact and/or jump on the spot a few times - why on earth would you map interact and jump to the same button? I take the bait, jump on the spot a couple of times, re-position myself and try again. Success! He meows a couple of times and our hero Neil projects a quest onto our feline botherer. Like most cats, he doesn't speak a lick of English, but the prince is certain that the cat is hungry. I accept the quest that Neil's just made up in his head: we shall head out and find cat food, our kingdom be damned.

“Nigel is off his nut” banters Pronto.

I want to help the cat as quickly as possible, as I’m in a rush. I recall that I just caught a fish, but he turns his nose up at it. Apparently this cat will only eat tinned products, so I walk away and leave the fussy prick to starve.

You see, it's not only cut-and-paste NPCs who are desperate to bury you in fetch quests. As I’ve mentioned, sometimes animals are keen to get in on the act too - see the above words about a hungry cat as proof. One of the more memorable mini-quests in Skyrim, for example, involved a talking dog. His name was Barbas, he was from the Bronx and he was a very good boy.

The only talking Irish Wolfhound in the game, and perhaps any game for that matter, Barbas is a witty mutt who needs help locating his master. You can help him immediately or drag things out and make him tag along as a companion for a good chunk of the game. You can’t marry him though, not that I tried.

Another personal favourite talking-animal, quest-giver is the gun-slinging, Mexican dog from Red Dead Redemption. He is the unintended star of a mid-game mission, the result of a wonderful glitch. Waiting outside a bandit-infested town, he provides the mission lowdown before dry-humping your leg. I may have dreamt that last bit, but I’m pretty sure the rest is true.

There are of course loads of other games featuring gobshite animals, Bubsy and James Pond being the most well-loved examples, but I don't have time to write about them.
Contemporary Games