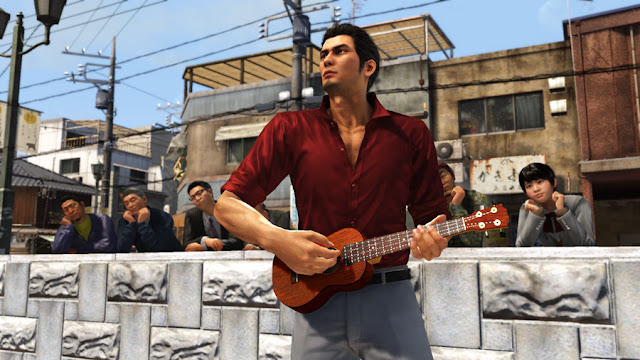 I didn’t set out to ignore 2017's finest, yet that’s exactly what I've done. I played Resident Evil 7 back in February; it started off well, finished poorly and was fairly average overall. I just recently broke the seal on the Wipeout Omega Collection, a highly polished selection of Vita and PS3 games packaged in a faux-PS1 sleeve that may or may not have influenced my purchase. It’s Wipeout, but in 2017.

I also played the final Dark Souls 3 DLC, but that doesn’t really count.

I may be lagging behind on new releases, but I have been playing games. I’m pretty much caught up on 2016, having finished Dead Rising 4, Final Fantasy XV, Yakuza 6, Pac-Man Championship Edition 2 and Call of Duty: Infinite Warfare. Yakuza 6 was the best of the bunch. It starts slow, but is near impossible to put down once it gets going. Dead Rising 4 was disposable fun and I’ve already said plenty about Final Fantasy XV. I only played the single player campaign of Infinite Warfare, as I’m terrified of getting “fucking owned” by a twelve year old, but it was pretty good. Pac-Man CE 2 was nowhere near as addictive as the first game but was still entertaining for a couple of hours.

I’ve also been combing PS sales for bargains. Dariusburst Chronicles Saviours is tiny but perfectly formed on Vita. I also grabbed Darkest Dungeon earlier in the year, played it for thirty minutes, got a bit depressed and moved onto something less horrifying. And I finally played Wolfenstein: The New Order, after three years of listening to everyone bang on about it. I really enjoyed the setting, but otherwise it’s a bog standard FPS with far too many tedious levels. Hey BJ Badman, swim around in some sewers looking for a tool and then walk around a hideout looking for paperwork will ya?

I’ve also been indulging in nostalgia. I returned to Paradise City earlier this year, spending countless hours smashing billboards and miss-timing barrel rolls. Burnout Paradise is one of the finest games of the last generation and has aged beautifully. And then there’s Final Fantasy VII. I’m currently playing through the enhanced, PS4 version and it is sublime. I reckon I’ve finished VII four or five times over the years, though not for a decade. It has everything I want from a game and I find that I’m appreciating it in new ways. In particular, I’m astounded by the level of detail in the pre-rendered backgrounds, and I'm noticing tiny features that escaped my attention in years past. I’m sure I’ll be writing plenty more about FFVII in the coming weeks.

I’ll eventually get around to sampling the best of 2017, but for now I'm afraid I have no opinion on Persona 5's sense of style, Breath of the Wild's vast expanses, or what went wrong with Mass Effect Andromeda. I have no fucking clue what PUBG stands for and have yet to decide which hideous squid-woman is my Splatoon 2 waifu.

Sorry about that.
Contemporary Games