Jumping Back into the Animus 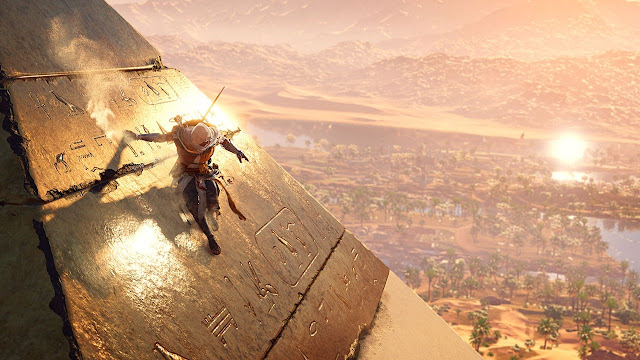 I was fascinated by history long before I was into video games. As a child, I’d daydream about knights and castles, and spend hours flicking through my Weetabix Illustrated Book of British History. For years, I thought Henry VIII was a crispy, breakfast biscuit.

As a teenager, I read wacky theories about precursor races and dense tomes on the ancient world. I pored over epics like Gilgamesh and the Iliad, and read widely on the campaigns of Alexander the Great. I studied Modern History at university, in part because it was the cover-all-your-bases subject for students undecided on their future profession, but also because I was still fascinated by the past.

History and games don’t mix as well or as often as I’d like. Historical periods are well covered in the RTS genre, but outside of that it’s slim pickings. Alternate histories are popular, though the actual setting is rarely of any great consequence, and the FPS has an on/off relationship with WW2 and other semi-modern periods with guns and guts in them.

And then there's Assassin's Creed.

The historical settings overshadow everything else in Ubisoft's long-running franchise. Altair was a just a vehicle to explore the 12th Century Middle East, and the setting was perhaps the only redeemable feature of AC3. I can’t even remember the name of Black Flag’s protagonist, but I fondly recall plundering my way through Black Beard’s Caribbean. Paris swallowed up whoever the fuck it was I was playing as in Unity, and everything outshone dullard Desmond. Even Ezio, a charismatic and memorable hero, was outdone by the era and cities in which he operated. Florence, Venice, Rome and Constantinople were breath-taking in scope and design.

These settings are packed with detail and stay relatively faithful to their real life locations. The series’ tendency to incorporate historical figures in somewhat fictionalised roles is endearing, and I've been encouraged on numerous occasions to read up on the real people behind the caricatures. There is of course a fair amount of artistic license, but enquiring minds can learn a lot from the periods and places of Assassin’s Creed.


I’ve been playing AC since the original. For my money, AC2 is the best in the series, and the franchise has gradually gone downhill since. When it bounced back, it did so as a pirate adventure, not as an Assassin’s Creed. The opportunity to explore the past has drawn me back, even when everything else suffered from the demands of a rushed dev-cycle. Gameplay grew stale, the modern excursions more tiresome and the glitches ever more comic, but the cities remained beautiful.

I played a few hours of Unity, just long enough to appreciate its rendering of Revolutionary Paris, but I was sick of the AC formula and couldn’t bring myself to give Syndicate even the briefest of looks. Now, three years removed from my last dive into the Animus, I think I’m ready to do it again.

The latest AC, Origins, will go back further in time than any AC before it. It is set in Ptolemaic Egypt, home to some of the most recognisable names of the ancient world, including Caesar and Cleopatra. It will be fascinating to wander the streets of Alexandria and Memphis and see what silliness Ubisoft has woven into the real history of the period.

Most interesting of all is the forthcoming Discovery Tour DLC. It's a free update that adds a new game mode, which allows you to roam the cities of the Ptolemaic empire, without having to worry about story or combat. It is intended to be an interactive museum, and will feature tours written and narrated by Egyptologists. It sounds like all the best bits of AC, minus the stabbing. I think this is a wonderful idea that opens up countless possibilities, not least of which would be VR support. There’s no indication that this will happen, but it’s the kind of thing that might convince me to consider investing in a silly helmet and a bunch of extra wires.