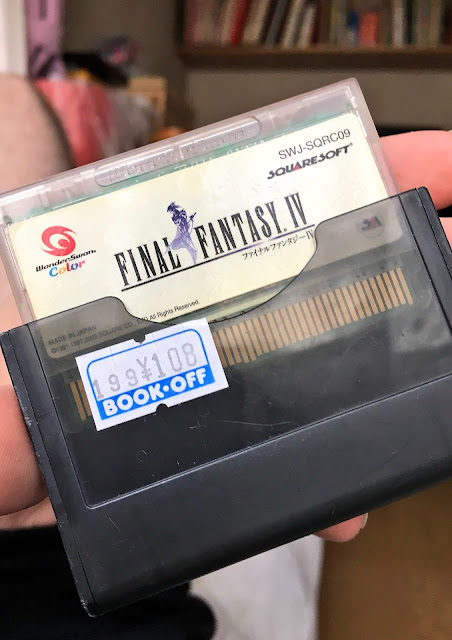 One hundred and eight yen.

Bandai’s WonderSwan was a Japan-only, handheld console. Released in 1999, it was designed by Gunpei Yokoi, the man behind Nintendo’s Game Boy. Tragically, it would be his final, major contribution to the industry, as he was killed in a traffic accident in 1997.

The original, monochromatic model was replaced by the WonderSwan Color within two years of release, and finally the SwanCrystal in 2002.

Bandai’s 16-bit handheld hung with the competition at first, thanks to its low price point, long battery life – up to 40 hours on a single AA battery – and initial support from some of the biggest third-party publishers, including Squaresoft. Ultimately, however, the competition was too strong. The Game Boy Advance claimed an overwhelming share of the market and Bandai’s prized third-parties jumped ship. The WonderSwan was eventually discontinued in 2003, having sold approximately 3.5 million units across three different SKUs.

One hundred and eight yen. The cost of a rice ball from the local convenience store, a small bunch of bananas, or something more expensive that has been discounted to exactly ¥108. A drop in the ocean, pocket change; fuck all. Honestly, FFIV is not a valuable game, so ¥108 is probably about right for a loose cart with no guarantee, but that didn’t stop me from getting excited and making a purchase.

Of course, I’ll never play it. I’ve finished FFIV before on other hardware, and it’s not one of my favourites. Also, well, it’s on the WonderSwan Color, isn’t it. However, having the opportunity to buy games so inexpensively, games that seemed so exotic to a younger me stuck in a PAL hell, is still very appealing. It’s part of the reason why I’ve built up a sizable Japanese Saturn collection over the years. I recall seeing these games in magazines back in the day, reading about them on forums and seeing them listed as expensive imports in shop catalogues. I wondered what they'd be like, and now I’m in a position to find out. Also, I like buying games, especially cheap ones. I like hunting for them, discovering bargains, putting together wish lists and learning about unfamiliar titles and hardware. That’s why I got so enthused about the Dreamcast last year. It’s always nice to have something new to hunt for and obsess over, even if it’s just for a few weeks.

WSC games are inexpensive and fairly easy to find. They usually reside at the bottom of discount bins, unwanted and unloved. I already have a WSC, the Final Fantasy II special edition that came with a charming phone strap, so there’s no expense there. I’ve hardly touched it, but it does look nice sat next to my yellow Game Boy and powder blue Game Gear. Retro portables may be the best kind of retro – nostalgia immediately to hand, without the hassle of cables, power converters and a CRT TV.

So yes, I might buy some WonderSwan Color games. If they’re only one hundred and eight yen, it'd be silly not too.
Retro Gaming