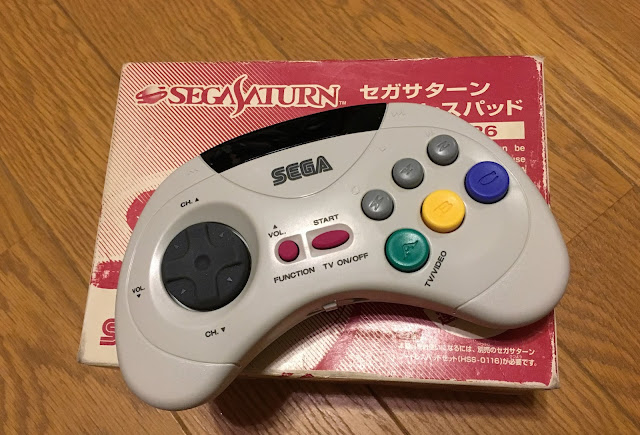 You can never have enough Saturn pads. For all of its faults, real and imagined, Sega's 32-bit machine had some great controllers. The much-aped Saturn pad was sleek yet substantial. The Nights 3D pad was ahead of its time, just like many of the Saturn's features. You could wield the Saturn light gun without looking like a knob, the steering wheel looked cool, the bog standard joystick was excellent and there were countless OTT, game-specific peripherals, such at the Virtual On sticks and the thingamabob that came bundled with Space Harrier.

I own lots of Saturn controllers. More than I have hands (2), or friends (2). This week I added another to my collection, the Infrared Control Pad, or the Cordless Pad as it's known here in Japan. A cordless pad from an era of too many wires.

When I think of wireless controllers, I tend to think of the PlayStation 3 and the Xbox 360. It was a defining feature of that era, and a tangible upgrade from previous generations. It worked perfectly; you'd have to wander far from the console to lose your connection, putting a wall or two between the controller and the built-in receiver. We were free to lounge in whichever chair we wished, without having to worry about knocking over drinks or strangling pets with dangling cords - two hazards that almost ruined previous generations for me.

The wireless controller is nothing new, of course. The Internet tells us that the very first was the CX-42 Joystick for the Atari 2600, and I have no reason to disbelieve the Internet. It had a receiver the size of a small house and burnt through batteries at a rate that would put the Game Gear to shame. Atari used RF technology, which was abandoned come the 1990s in favour of infrared. The NES, the Mega Drive, even the Jaguar - most consoles of the last three decades have had a wireless option, either first or third party.

I bought my Saturn Cordless Pad one rainy evening in Tokyo. A Tuesday evening. Last Tuesday evening, to be exact, at around 5pm, but let's not get too bogged down in useless details. I'd had curry for lunch. I paid only ¥800, well below the usual asking price. Boxed and complete, it was a rare bargain in a time of inflated retro-prices, and I was exceedingly pleased with myself. Later that evening, when I finally had the chance to open it up, I was delighted to find that the pad was as good as new. No fading, no scruffs, no chips and no gunk - this is Japanese "used". If you buy an old controller in the UK, you'll want to bathe it in bleach before even considering using it. Here, you're often hard pressed to spot the difference between a new or second hand peripheral.

The cordless pad requires a receiver which uses both controller ports. Unfortunately, mine was the additional controller pack, and as such doesn't come with a receiver. That was a disappointing discovery. Basically, I have an unusable controller, but it's a beauty nonetheless. The colour scheme is *Italian chef kiss*, the shoulder buttons click just enough, the face buttons are exactly where you want them, and the d-pad is the daddy of all d-pads. The start button has a satisfying, spongy quality, and I'm intrigued by the labelling that betrays its second function as a TV remote. I imagine the inhabitants of 90's Japan using their Saturn controller to watch period dramas, Kaiju matinees, and mad game shows where hosts batter balls with foam clubs, spank arses and set fire to comedians. My Saturn pad can tell a hundred stories, if I'm drunk enough to listen.