A Shootout in Virtua City 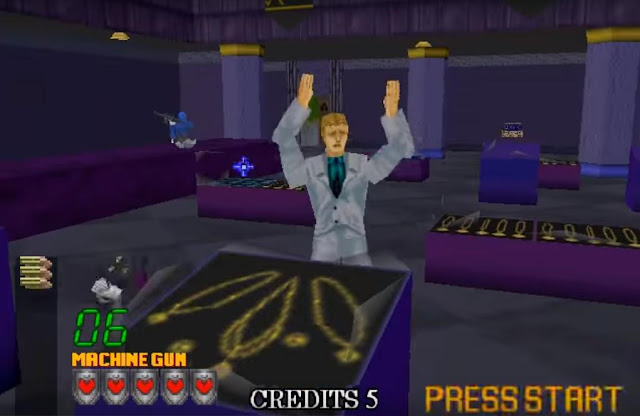 Seventeen polygonal criminals are squatting behind a counter at the back of a jewelry store.

"There must be some kind of mistake".

Gary, a career criminal, is very unhappy with his current predicament.

"Steven. Steven, mate. There's no way seventeen of us are gonna find cover behind this counter. We're going to get shot to pieces. One of us should say something".

"I can't stop elbowing you; there's no space here".

Gary is right. There is no space, and he has particularly pointy elbows.

"No, fuck off. This counter is full. There is no more room at the counter". Gary can not fathom having to make space for yet another gunman behind what is, at best, a medium-sized counter.

"Sorry, boss' orders. He says we need to beef up our presence at this end of the store" explains Gareth.

"Oi, you lot behind the counter! I've got two hostages for you to look after".

"You've got to be taking the piss, Jermaine. Where are we going to stash these pricks?"

"Not now, you fucking moron. Christopher, you're in charge of this pair" barks Jermaine.

"¿Qué?" Christopher is from Spain.

"Wait until the Virtua Cops arrive, then let the hostages go. Hopefully they'll put a few holes in 'em, being how trigger happy they are".

"¿Qué?" Christopher is from Spain.

"Jermaine" exclaims Gary. "Christopher literally has no idea what you're on about".

"I don't care" says Jermaine, while doing a wanker hand-gesture. It's directed at Gary, but the eighteen criminals are so closely-packed that they are all subjected to Jermaine's wankering. "I have to lean out of a helicopter later. I've got my own problems. You lot figure it out".

Jermaine sprints out of the store. They'll never see him again. Because he's about to get shot out of a helicopter.

"Gary?!" comes a familiar voice from further down the counter.

"Gary, great to see you. Wish it was under better circumstances of course. How's the family?".

"They're good thanks. Look, to be honest I just want to get through this in one piece. Maybe catch up later?"

"That would be wonderful".

A voice bellows over the counter "Alright, hands off your cocks and on with your socks". It's their Team Leader, Gavin.

"This is how it goes, yeah? When the Virtua Cops arrive, you emerge from behind the counter one at at time, left to right. When the guy to your left dies, you break cover and stand up. You shoot at the cops, but not too quickly and definitely not accurately. Understood?"

A confused silence descends over the eighteen men and their pair of hostages.

"Come again?" asks Derek, who despite me not mentioning him up to this point is definitely there.

Gavin removes his sunglasses. If looks could kill, this one would've surely ended Derek. It's that bad. But Derek is already dead, by a bullet. A bullet from a gun. A bullet that has entered his cranium just above the left eye socket and blown out the back of his head. His gooey brains are spilled all over the counter.

"Hit the deck! Emerge from left to right!" screams Gavin.

The cops are here and they're not taking any prisoners.

Steven is at the far left. He knows it's his turn to pop out of cover, but he doesn't want to. He likes being alive, but something inside is compelling him to move. He has an overwhelming desire to get on his feet and present a target. He is thinking about missed opportunities as a round rips through his face, taking his jaw clean off.

The hostage doesn't stand a chance. He's done in before he clears the necklace section. Another dead bastard.

Sixty seconds pass, and the cops move on. All that can be heard are the screams of the dying.

"Should've been in Virtua Tennis" groans Gary. He had been an outstanding player at the youth level.

Justice has been served.
Retro Gaming