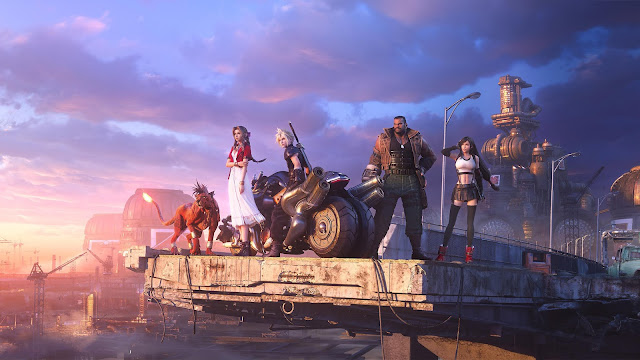 I still can't believe that those mad bastards remade Final Fantasy VII. I always dismissed it as a fanboy fantasy, for which Square Enix would never have the appetite. I was wrong.

I finished Final Fantasy VII Remake last week, and I'm glad that it exists. It adds something worthwhile to the VII menagerie. It works both as a companion piece to the Seven canon and as an interesting deviation.

I enjoyed it, but much of that enjoyment was down to nostalgia. Remake is good, but Remake is also bad. It's complicated then, but so are most games that are worth remembering.

In an attempt to organize my thoughts, I have committed them to a "wot I liked" and "wot I didn't like" blog. Or a MidYah and MidNah blog, if you will.

Because Midgar is the setting of Remake, and Yah sounds like a exclamation in the affirmative and, well, you get it.

MidYah: Nostalgia
Square Enix invented nostalgia two decades ago, when they started repackaging and re-releasing old Final Fantasies. Nostalgia is fucking lovely, and for fans of 90s Final Fantasy, this is its truest form. Remake is at its best when its giving us a faithful interpretation of key moments from the original. It retains what we loved the first time around, but presents it through a modern lens. The music, the characters, the small retained interactions that we know are coming - they take us back to a different moment in time, while also allowing us to enjoy them in the here-and-now. As a work of refreshed nostalgia, Remake nails it.

MidNah: The Awful Pacing
Remake is a 15-20 hour game masquerading as something far longer. There are prolonged stretches where nothing happens, missions that drag on for no good reason, and the middle third - meeting Aeris through to the end of Wall Market - is massively tedious. The story soars then sags over and over, and meaningless dialogue and forced-walking sections kept chipping away at my enthusiasm from start to finish.

MidYah: The Main Cast
The main characters are outstanding. They are likable, they are interesting and they remain true to the original. They look and sound exactly how I wanted them to. Cloud is wonderfully portrayed, low-key but nuanced, and with one or two exceptions, they nailed Shinra and the Turks.

MidNah: Side Missions and NPCs
If it's optional, it's not worth your time. The side missions are unimaginative and the height of tedium. "Here, Cloud, can you find a bunch of cats for me?" "Soldier boy, please fetch this item and bring it back here?" "Mako-man, please go all the way over there just to kill a regular monster and then come all the way back here to tell me about it." And the people asking you to complete these infuriatingly bland tasks? Well, they look like Bioware rejects from 2009, who also happen to shop at GAP.

MidYah: The Whispers
Whispers are floaty-arse creatures that make a constant nuisance of themselves in an effort to ensure that fate's course remains unchanged, and that the story adheres to its intended path. When things are changing, they intervene. Clearly, they are the in-game representation of the FF hardcore fan, whining men-children who have taken it upon themselves to defend every aspect of the original game. Well done SE for doing this, and well done me for figuring it out on my own.

MidNah: Motorbikes
Someone at SE really thought this was fun, huh? The first motorbike section is bad. The second, towards the end of the game, is unbearable and somehow lasts over twenty minutes. They turned a fond memory from the original into something entirely rotten.

MidYah: The Music
Obviously, the original score is exceptional. I wouldn't say Remake improved it, but it succeeds in building upon the original and changing it in a meaningful way. I was constantly picking up on familiar refrains in the middle of new compositions. I have nothing but good things to say in this regard.

MidNah: Chocobo Sam and the Don Corneo Storyline
I wouldn't piss on Chocobo Sam if he were on fire. He is a sex trafficker for a serial rapist, yet is presented like a good old boy. A harmless, cowboy-talking sex criminal. I hated this whole narrative thread. However....

MidYah: Cloud's Dance Scene
This was great. A visual treat, part spectacle and part interactive rhythm game. And Cloud's reaction was classic Cloud. At first he dissented, then he begrudgingly accepted, and ultimately he did it exceedingly well.

MidNah: Roche
The worst thing that has ever happened in a game, ever. Everything that is wrong with JRPG characters all crammed into one abhorrent individual. Absolute drivel.

MidYah: Midgar
I never grew tired of panning the camera overhead to stare at the imposing plates. Shinra HQ looked exactly how I wanted it to, and the city nailed the industrial-beauty / cesspit-of-mechanized-decay vibe. With that being said...

MidNah: Midgar
If I never see another pile of rubble again, it'll be too soon. Thirty five hours of industrial detritus was at least twenty too many. In some ways, Remake reminded me of another claustrophobic RPG, Dragon Age 2. They are both trapped in one city, and it's to their detriment, yet both are able to rise above this constraint thanks to their strong characters.

MidYah: Red XIII
Loved Red and loved the way he was included in the final stages without the player being given full control. It allowed him to become part of the team, without asking us to make room for a new character so close to the end. I was also impressed with his animation, especially when he went onto his hind legs to pull leavers with his front paws. Red is a big winner here.

MidYah and Nah: Combat
Even after 35 hours, I'm still not sure how I feel about the combat system. I was becoming more proficient, and the stop-start nature was bothering me less, but it never really clicked. I got better at switching to other characters at optimal moments, and I enjoyed the variety it provided. However, I didn't like not being able to use curative items unless my ATB bar was suitably charged, and I never cared all that much about the level of my materia or what abilities I had learned. Some of the boss showdowns were spectacular whereas others were just frustrating, and I didn't appreciate the uneven level of difficulty to be found among run-of-the-mill enemies. A mixed bag.

MidYah: The Ending
The Zack stuff was a nice touch and I applaud SE for having the balls to position Remake, and in particular what will follow, as a potential deviation from the original. With fate tossed aside, everything is now on the table. Perhaps the player will be given the option to stick to the script or wander off in the next game/s?

MidNah: Replayability
Last night, I found myself wanting to spend a little more time with the crew and perhaps get more inventive with the battle system. I jumped in via the chapter select and was immediately struck by how unappealing the prospect of a replay would be. The pacing would be unbearable a second time around, and there was a good reason why I skipped almost every side mission and optional NPC conversation the first time.

So yeah, I finished FF7 Remake. I loved it, and I disliked it. Ultimately, I'm glad SE made it happen and am genuinely excited to see where Remake goes from here.