The Secrets of Sega Rally 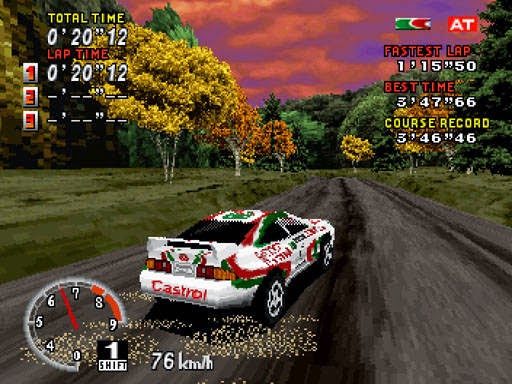 I had a copy of Sega Rally Championship from 1996-1998, back when I owned a PAL Saturn. I rebought it in 2006, when I grabbed a Japanese system, and have held onto that version ever since. It is one of my favourite games on my favourite retro console, and is something that I've played on-and-off across four different decades. It is arcade racing perfection - fun, colourful, inviting, easy to pick up but difficult to master.

Sega Rally Championship features three courses - Desert, Forest, Mountain - and two cars - the Toyota Celicia and the Lancia Delta. This was known. Or at least it was, until my world was turned upside down over the weekend by a picture retweeted into my timeline. It was a screenshot of a fourth course and an unfamiliar car, claiming to be from Sega Rally Championship. Must be some sort of PC mod, I thought to myself. Those PC gamers are out of control.

But then I dared to dream. Could it be possible that I'd been completely unaware of an extra, hidden chunk of one of my favourite games? So I Googled it and, sure enough, there is an extra track (Lake Side) and a hidden car (Lancia Stratos). The track is unlocked by finishing the arcade mode in first place, something that I had apparently never managed, and the car is a gift for finishing that course at the front of the pack. Or if you are a filthy cheat, you can just press some buttons at the main menu and access both.

How could I have been so ignorant?

Sega Rally Championship is my quick-dip game. When I have that retro itch, and I want something fun for 5 minutes, I turn to Sega Rally. I've never dedicated any significant length of time, nor some marathon session, to dominating the leader boards. Until last weekend, I had never been inspired to check an FAQ. Being a teenage Saturn owner was a lonely existence. All of my friends had PlayStations or N64s, so there was no playground conversations about SR lap times or hidden courses. Also, as has been well documented, I am bad at video games, so it's hardly surprising that I was clueless about content locked behind a first-place finish.

At first I was embarrassed. However, that embarrassment soon turned to excitement at the prospect of experiencing something new in a game that I've been playing for years. A game that I thought I knew inside-out. An hour later, I was perched in front of my CRT, a copy of SR Championship Plus sat in the Saturn's disc tray, and my Nights pad in hand. This was a lovely thing; a rare moment of retro discovery. I wanted to savor it, so I decided that I would unlock the track and car by finishing the arcade mode in pole position, no matter how long it took. In attempting to do so, I set two fastest times.

I am terrible, but now there are no more secrets between Sega Rally and me. Lake Side is nothing special, to be honest. I love the red sky - SEGA gets skies - but the constant medium turns make it a fiddly course to get around at any great speed. The new car is a welcome addition, and I've already used it to set a fastest lap on Desert Time Attack. But none of that really matters. Discovering something new in a beloved game is a rare occurrence. I was seeing things for the first time in a game that has been part of my life since my teens. That was special and it was worth the embarrassment.

I might be a gaming fraud, but I'm an exceptionally happy one.
Retro Gaming