My Favourite Games of the 8th Generation: 3-2 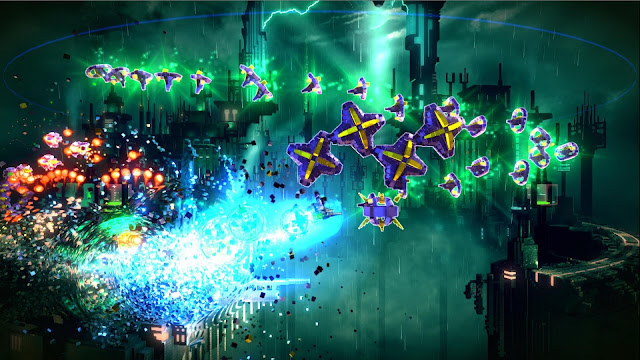 I'm writing a retrospective series about the end of the 8th Generation , which includes a Top Twenty Countdown of my favourite games.

The Countdown Rules.
20. Forza Horizon 4
19. Mario Kart 8 Deluxe
18. The Legend of Zelda: Breath of the Wild
17. Yakuza 6: The Song of Life
16. Mafia III
15. Undertale
14. What Remains of Edith Finch
13. Ghost of Tsushima
12. Assassin's Creed Odyssey
11. Death Stranding
10. Fire Emblem Awakening
9. Monster Hunter: World
8. Metal Gear Solid V: The Phantom Pain
7. Red Dead Redemption 2
6. Uncharted 4: A Thief's End
5. Return of the Obra Dinn
4. Yakuza: Like a Dragon
3. Resogun
2. Bloodborne
I got my PS4 at launch. It came bundled with the spectacularly nondescript Killzone: Something or Another, and I also had a copy of Assassin's Creed IV: Black Flag within that first week. However, neither of those got a look-in, because I had Resogun (2013) and that was all I wanted to play.
I was compelled to save all the humans and rack up the highest score possible. And it most certainly was a compulsion. For those first few weeks with my new PS4, I was thoroughly addicted to Resogun, in a way that I would never expect with a launch game. I'd really enjoyed Super Stardust HD on the PS3, and I'd heard all the voxel-talk, but I never thought I'd fall this deeply for an arcade shooter, and a PS Plus give-away at that. If it were that good, I thought, they'd never bundle it in with the PS Plus subscription. What a massive fucking idiot.
Resogun crept up on me. I didn't quite realize I had fallen for it so completely until it was too late. I quickly came to learn the ebb and flow, the rhythm of the space nonsense. I knew how to judge my performance by what was going on around me, and I could tell well in advance whether I was on track for a meaty score or not. But it was never mindless. I was enjoying it, finding satisfaction in my understanding of its intricacies and knowing how to get the most out of each run. And as I got better at it, the runs really ran. I'd play into the early hours, starting and restarting until I hit that perfect zen, where everything seemed to be flowing just right, my multiplier going through the roof and the score ticking ever upwards. And all the while I was being treated to an explosion of colour on my big TV, and a soundtrack that I never tired of.
It's fair to say that I got rather good at Resogun. The at-launch release ensured that several other of my friends were also playing copious amounts, and the high-score chasing became quite competitive. We'd post our scores and needle each other on Twitter. Each morning I'd check my phone, half dreading that someone had beaten my score, half hoping that someone had, thus renewing my enthusiasm for another evening of space blasting in an attempt to regain my crown. At my peak, I was in the top-50 worldwide. I have never been more beautiful.
But this isn't just past-tense adoration. I still return every year or two, and each time I go back I'm addicted anew. It's pure comfort. I know exactly what I should be doing and how to do it and, most importantly, I still enjoy it. It's simplicity, in premise and controls, ensures that the re-learning process is relatively brief and I can just get back to saving those humans and getting into my voxel groove. I got hooked again earlier this year, when I gave myself a week to indulge between new releases. I found it to be as irresistible as ever.
There was also a PS3 version and a Vita port, both of which I partook in. The latter in particular ran far better than it had any business running. I played a lot of Resogun over the last few years, and when I think back to this generation, it'll likely be the first game that comes to mind. An auspicious start to a new era of gaming. 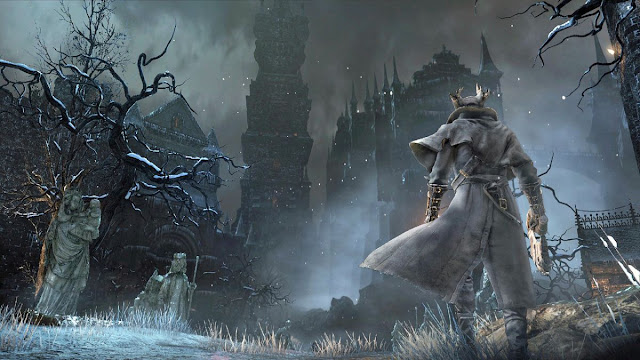 Unlike Resogun, I have no desire to return to Bloodborne (2015). It exists only in the past, which is where I want it. A peculiar, uncorrupted memory. However, that doesn't make it any less special.
At some point between the end of the PS3/360 generation and the arrival of Bloodborne, I got into the Souls games. I tried Dark Souls for the umpteenth time, and for some reason it clicked when it hadn't before. Dark Souls 2 followed shortly after, which I also loved. Finally, I was good at games! I was well-up for Bloodborne, excited from what seemed like the first big PS4 exclusive. It would not disappoint.
When everything goes right, there's nothing quite like Bloodborne's combat. It is dance-like, rhythmic and timing-dependent. It's all about weaving between harm, finding the briefest pockets of respite before going back on the offensive. Switching between states of your trick weapons is crucial - knowing when and how to best utilize them can be the difference between misery and ecstasy. They are both visually and functionally impressive, and perfectly suited to the up-tempo beats of combat.
Offence is your best defence. You never sit back and defend, because that is death. Here you are encouraged to seek violence when you are injured, never shying away from it. If you are quick enough, lost health can be replenished by damaging your foe, a simple but wonderfully integrated mechanic that completely transforms gameplay. There are no shields to hide behind, or heavy armor to cover up your deficiencies. To succeed you must be the aggressor, and as soon as you accept this the game takes off.
While your movements are less deliberate than Dark Souls, and you are forced to move much faster, Bloodborne is no less punishing than its spiritual predecessors. If anything, it's more challenging, as there are even more windows for failure, opportunities for the game to punish you for a momentary lapse in concentration.
You must dig deep into your bag of tricks if you want to succeed. I almost never parried in DS, as the timing was difficult and it didn't really suit my playstyle. While there is no parry here, the firearm is the equivalent and you cannot afford to ignore it and its staggering properties. Father Gascoigne, one of the first major bosses, almost demanded proficiency in this art. That might explain why so many people gave up there and then! Once mastered, you'll never forget it. Hugely satisfying in sight and sound, it delivers a massive thwack that begs to be repeated time and time again.
Part gothic nightmare, part Victorian London gone a bit wrong, Yarnham might be Miyazaki's most memorable creation. My enduring memory of Bloodborne is skulking through cobbled streets and gated alleys, wondering what this city looked like pre-being fully-fucked. The residents that remain, desperately holding on to what remains of their sanity, are a fascinating window into this world. Hiding behind locked doors, adhering to a curfew that won't save them, they are a constant tease. The lore of this blood-dependent city seeps through the cobbles, clings to the walls of filthy clinics, and spews from the mouths of shady NPCs. You never know what to believe, and no story is given to you plain and simple. Words are darkness, yet illuminating. During the day, I feasted on online speculation of what it all meant. Then, come the evening, I'd delve back in and explore myself.
Bloodborne is the peak of a movement that is still with us. The masterpiece of a group of games that came to define so much of the last decade.
If you haven't already, do yourself a favor and embrace the old blood.
The End of Another Generation