Blur - Why Not Play Something New? 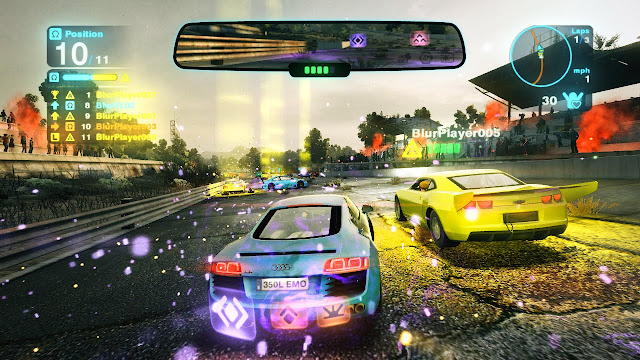 I don't recall having much interest in Blur at the time. That time being 2010, and Blur an arcade racer developed by Bizarre Creations for the PS3, 360 and PC.
Back then, we were spoilt rotten for racing games. The best-in-class Burnout Paradise Ultimate Box was barely a year old, and many of us were still whizzing around Paradise City on the regular. I know I certainly was. Hot Pursuit was an outstanding Need for Speed, and the series would continue to ride high for the next couple of years. MotorStorm was worthy of our attention, Forza had just arrived and Gran Turismo was doing numbers. Split/Second, a very similar looking racer to Blur, lunched just a few days earlier than its lookalike, confusing everyone.
2010 was also a bumper year for games in general. Mass Effect 2, Red Dead Redemption, Final Fantasy XIII, God of War 3, Assassin's Creed Brotherhood, and DJ Hero 2 all had my undivided attention at different points, not to mention all the 2009 leftovers I was devouring. In 2010, Blur wasn't getting a look-in.
As you know, I'm rather fond of the PS3. I still play it in fits-and-bursts, and I cannot resist retrospective podcasts or articles about that generation, especially those that highlight underappreciated gems. Such things excite me deeply, and I had taken note of Blur's regular appearances. Anyway, long story short, I bought a copy earlier this year and have spent the last couple of weeks dipping in and out of it.
And it is excellent. An easy concept to grasp - weaponized arcade racing - that runs fast and smooth, and looks stunning for an eleven year old game. Not just art-style beautiful, but genuinely, graphically beautiful.  A shit-tonne of content in there too. Content, graphics - I'm a re-playability comment short of sounding like a 1990s game magazine reviewer!
"We reckon the Gameplay is at least a 93/100. Tell your mum to buy it!"
While that's all well and good, it probably isn't a compelling enough reason to dust off your PS3. There are plenty of other modern racers on modern consoles that I'm sure you'd enjoy even more. Consoles that are probably already hooked up to your big TV. So why look back?
Curiousity might be enough to get me to sample an older game, but that can be cured within ten minutes. I have stacks of Saturn titles that I played once for a few minutes, just enough to get the gist, and will almost certainly never touch again. Putting nostalgia aside, if I'm going to be drawn back and convinced to hang around, an older game needs to evoke strong feelings of the period in which it was created. It must be a game of it's time, replete with a strong aesthetic, something that can transport me back to the period from whence it came. And that period must be of personal interest.
Blur absolutely checks those boxes.
It comes from a time when new IP were less scarce, when publishers were more willing to take risks on something new. The PS3 and 360 libraries are full of quality games that came and went. A treasure trove of variety in that not-quite-AAA range. This is the biggest reason why I still buy a handful of PS3 games each year. To be fair, Blur came out at the tail end of that era, and its poor performance at retail may somewhat validate the decision to move away from risky, new IP.
Blur is drowning in neon. It punctuates everything, and the grim weather shared by many of the race stages allows the neon sparkle to be accentuated. It is beautifully vulgar and I love it. I'm not sure why, but I associate this gaudy palette with the early-mid 2010s. A post-new rave, neon nightmare.
It also marks an early attempt to marry games and social media, and the language and values of the latter are present throughout. By pulling stunts or fulfilling fan requests, you gather followers who can be heard cheering when you fulfill their wishes. On top of that, it constantly prods you to share your results to Twitter and Facebook. A pre-Twitch solution to the marriage of games and sharing, that is as charming as it is antiquated. Equally as persistent is the encouragement to choose a rival from my friend list, a collection of expired PS3-gamers which features zero people who have played Blur. I swear every racer of that time was obsessed with me having a rival. Can't we all just be friends?
I also played Split/Second earlier this year. A very similar looking game to Blur, but one that I didn't enjoy nearly as much. It was missing Blur's character and I didn't feel like it was transporting me back to a different time in gaming. Decent, but not compelling enough to coax me away from my PS5, Series X or Switch.
Blur, on the other hand, continues to eat into my current-gen gaming, and that suits me just fine.