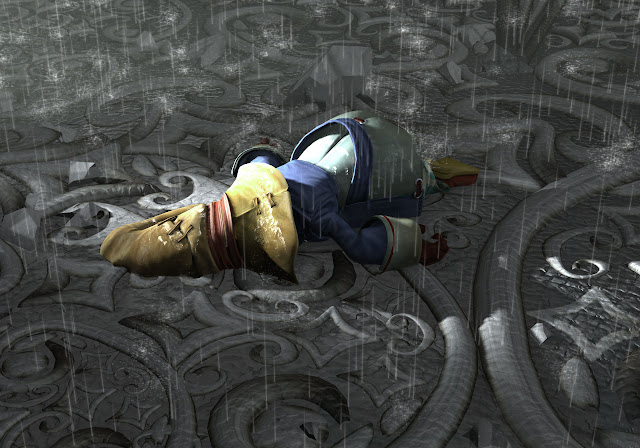 I've started nodding off in front of the TV, mid-game.
I play games in the evening, after everyone else in the house has gone to bed. After I've finished the post-dinner chores, exercised and showered. That usually means around 10:30 for about an hour - sometimes a little longer if I'm really enjoying myself. An hour an evening to lose myself in another world.
Only it hasn't quite been an hour of late, as I can't keep my eyes open that long.
First come the yawns. Then my mind starts to wander, and I'm unable to focus on the on-screen text. Next, things start to go distant. I'm awake, but barely. I know I'm closing my eyes, but I'm just resting them, or so I tell myself. I'll stand up and grab a water, that'll wake me up. I fail to stand. When I open my eyes, my character is running into a wall, my thumbs the only part of me that is still awake. I persevere for a few minutes, before deciding to pack it in.
Console to standby mode.
The next evening, I attempt to pick up where I drifted off, but I have no idea what I was doing or where I'm supposed to be going. This has been my video game existence the last couple of weeks.
Yes, I'm a little tired. The stresses of life, work being busy, and an increased exercise routine sapping my energy. However, I try to get to bed at a reasonable time, and six-and-a-bit hours per night is usually enough to keep me mostly-human.
Unfortunately, I think Final Fantasy IX is primarily to blame for my premature dozing.
Back in the day, I was beyond excited for FFIX. Final Fantasy was my new favoruite thing, having played and fallen in love with VIII the year before. I'd picked up a Platinum copy of VII immediately after and loved that too. The wait for the next installment was excruciating, and being in the UK there were very few other JRPG to keep me occupied. Certainly no other Final Fantasies waiting to be played. Japan and the US were both enjoying IX in 2000, but we had to wait until February 2001. You best believe that pre-order was placed as soon as it was available. At John Lewis, if I remember correctly, which I usually do.
As expected, I adored it. I played and replayed it, and it has been a constant fixture on my all-time list ever since, somewhere in the 10-20 range, and firmly in the four spot in my Final Fantasy rankings, tucked between Tactics and VI, but not on the same level as VIII and VII. That pair held up reassuringly well when I replayed them in recent years. Unfortunately, I can't quite say the same for IX, which I'm currently revisiting on my PS5.
It's charming but it lacks the personality, the sheer confidence, of it's PS1 predecessors.  It wants to be a throwback, but it's a little short on substance beyond that. An incohesive world lacking a coherent vision. With the exception of Vivi, the cast are forgettable at best, and the plight of the black mages is the only plot line that truly resonates.
All that being said, I have still enjoyed it. There are few things cozier than a PS1-era Final Fantasy. I'm about to depart for Memoria, and I wouldn't have stuck with it for 30 hours if I weren't having a good time. The nostalgia helps, yes, but even stripped of that it's still an outstanding JRPG.
However, that dozing has to mean something. Have I lost the ability to enjoy a slower-paced game? Do I need the instant gratification that modern games provide? Can I enjoy an old(er)-school RPG in 60 minute bursts? Fuck knows, but FFIX just hasn't engaged me the way that I thought it would, and I haven't been able to get into a rhythm. Long breaks in town and city settings, devoid of combat and full of uninspired conversations eat up entire play sessions. Characters are constantly given and taken away, with no opportunity missed to divide the party and wrestle control away from me, the player. What is left of the team is funneled from one relatively empty part of the map to another.
This replay, my first in 15 years, may have somewhat diminished FFIX's status as an all-timer. However, I do retain my fondness for it. It belongs to a stretch in gaming that will forever be dear to me, a time when I discovered Final Fantasy and a new genre in which to immerse myself. It remains special.
But I'm not that tired and Final Fantasy IX isn't quite the game that I remember.
Retro Gaming