How Did U get Under my TV? 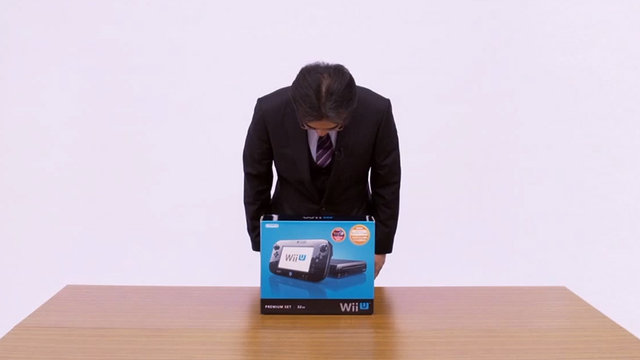 I wasn't going to buy a Wii U, at least not yet. I could count on one hand the number of Wii U exclusives that were of interest and still have fingers spare for counting other things, such as spades and geese. My nostalgia for Nintendo is non-existent and £300 was too great a sum just to scratch a hardware itch. With the PlayStation 4 less than twelve months away and no shortage of games and platforms to keep me busy until then, Nintendo’s troubled console was surplus to requirements. I wasn't going to buy a Wii U, but then I did.

Last Friday, word spread that struggling high street retailer HMV were set to offload a limited number of Premium Wii U bundles, including Nintendo Land and ZombiU, for just £199 ($302). That’s about £140 cheaper than the supermarkets and £80 less than the very best prices online. I called my local HMV, who confirmed they had twelve bundles in stock, and then spent the afternoon agonising over another block of plastic and wires. After much deliberation, some Twitter therapy and a couple of beers, I decided I didn’t need a Wii U, even at that price.

The next morning, I had a change of heart. The package was more appealing by the light of day, and I realised that the bundle also included Nintendo Land, something I'd missed the night before. I once again phoned my local HMV who told me that they had only two sets remaining; I spat out my toast, threw on my warmest clothes, grabbed my wallet and braved the snow. I legged it to the shopping centre, giving the evil eye to shoppers carrying HMV bags while pushing ahead of anyone I thought might be interested in a Wii U (strange looking men and the under twelves). I was gasping for air by the time I reached the counter; “Give me my Wii U bundle!”  I wheezed, and they did.

If you ignore the massive, initial update, I haven't spent a huge amount of time with my new console, but enough to get to grips with the hardware and user interface. The console is sturdy and not unattractive and comes with the shortest HDMI cable I have ever seen – I knew Nintendo wouldn’t get HD right! The home screens, as viewed on both the TV and gamepad, are a tad messy and confusing at first, offering three different views with differing functions, including a non-interactive mess of random icons and busy little Miis. The eShop is uncluttered and easy to navigate however, though far too light on content - basically, it’s the antithesis of the PS Store. Although I haven't delved too far, Miiverse has tons of potential as a built-in Twitter/GameFAQs, allowing you to post messages, questions, tips and drawings. However, it is lacking a section for things that aren’t related to a single game, hence why I’ve been posting my cock-art in the Luigi community.

For now, my Wii U purchase is all about the hardware and not a desire for more games.  I have been impressed by what little I have played of ZombiU, but it’s unlikely to be something I’ll stick with from beginning to end.  Nintendo Land strikes me as a glorified demo, perfect for getting a feel for the Wii U but unlikely to hold my attention for long. Short on other software, I tried the demo for Rayman Legends, which was excellent, and I can now join every other Wii U owner in bemoaning Ubisoft’s decision to postpone it until September. I also tried the Monster Hunter 3 Ultimate demo. Despite already owning the 3DS version, and giving up at the character creation screen, I might have to buy the home console version as well, as I would much rather experience Monster Hunter online.

The Wii U has bombed here in the UK. It is stuck in generational limbo and has a software release schedule that would embarrass even the Vita. UK retailers have been slashing prices in an attempt to shift units, and some are becoming quite vocal in their disappointment. The absence of forthcoming first party games is worrying, especially in a year where Nintendo are in danger of being lost in the shuffle of new PlayStations and Xboxes. To make matters worse, third parties are increasingly ignoring the Wii U entirely – the new Unreal and Frostbite engines will not function on the Wii U – which is a market that Nintendo had promised to court. I’m sure Nintendo has a few surprises up its sleeve, but it will need to act fast if it wants to prevent the Wii U from being left behind.

While the immediate future doesn’t look too bright, I don’t regret my discounted purchase, at least not yet. I love the gamepad and feel it has a lot of potential outside of flinging ninja stars, and you can be sure that the next round of first party output will be of the highest quality, once it arrives. I’m not sure what role the Wii U will eventually assume in our house – the Wii has been our karaoke-avatar sports-on rail shooter machine for a number of years – but I’m looking forward to seeing what Nintendo can do with it.
Contemporary Games