The End of a Generation - Disappointment 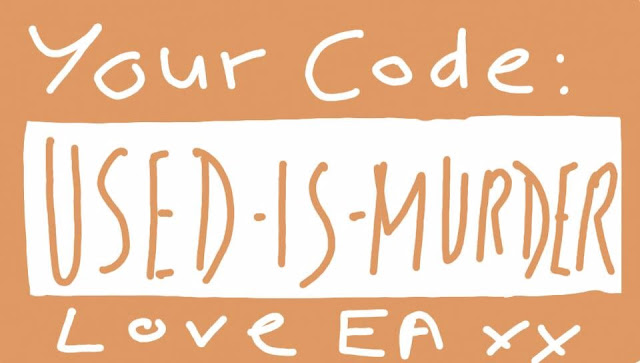 If you've been following my series about the 7th Generation, you'd be forgiven for thinking that I don't have a bad word to say about the last eight years of video games. In fact, I disliked many things about this gen, and I've been saving them all for this post.

In an attempt to combat the negativity and lighten the mood, I have illustrated this blog myself, using the Vita's Paint Park app. Unfortunately, I have fat fingers and am artistically challenged, but it was nice to have a reason to turn on my NGP.

Where to start? Oh I know, fucking Online Passes. Nothing better reflects the collective panic among publishers and their distrust of the consumer than the Online Pass. It was the flyer that gradually replaced the instruction manual in your game box, the one that presumed you were a thief and withheld content accordingly.  It was a product of the industry's struggle with used games and the wrong answer to a question of game ownership - I still can't believe we were on the verge of having a console that prohibited used games! The problem was that new games were too expensive, and still are, and punishing the consumer by withholding content was never the answer.

Downloadable content is great in theory, extending the shelf life of a game and giving players a compelling reason to hold on to their copy. Unfortunately, too often it has been utilised to sell content that should have been part of the original experience, in some cases content that was already on the disc. Costume packs were the height of idiocy, and while we are on the topic of disrespecting your customers, pre-order, in-game bonuses made a mockery of us all.

Online multiplayer was attached to everything in the 7th Gen. Solitaire Deathmatch anyone? I became accustomed to ignoring online multiplayer modes in single player games, automatically assuming that they would be a bit wank. Speaking of online modes and services, who can forget that wonderful month in 2011 when cyber terrorists hacked into the PlayStation Network, stole credit card details and used our money to buy fifteen hundred V for Vendetta masks.

The post-release patch enabled publishers to ship games that were crippled with bugs and glitches, such as Assassin's Creed 3, Fallout New Vegas and Batman: Arkham Origins, which they would then fix at a later date. It is rumoured that Ubisoft's Yves Guillemot originally wanted to release AC3 as a blank disc and then patch the full game "whenever I can be arsed". "It's fine, our customers are cretins" said some dick at Bethesda, probably. And it wasn't just the games that were broken this gen. Oh no, our hardware didn't work properly either. The Red Ring of Death, the orange light of discontent, the explosive DS - fuck all worked properly. We paid a small fortune for these consoles, with Sony famously suggesting we get a second job just so we could enjoy their subpar, online infrastructure. Nintendo, true to form, couldn't be arsed and just taped two GameCubes together.

The big studios did their best to wring every last penny out of their biggest franchises, caring little for quality or innovation. Call of Duty was annualised, leaving little time to implement new features or develop a new engine; Assassin's Creed has been in need of a year off since Brotherhood, and the argument for yearly sports titles is getting flimsier by the year. Every game with a gun in it wanted to become the next Call of Duty, and the "AAA or go home" approach to development helped no one. The middle tier has almost completely disappeared over the last couple of years, as games were increasingly identified as either indie or blockbuster, with little in-between. Also, this was the generation where Japan finally stopped making video games, instead turning its attention to hentai mobile apps and trying to convince the West that The Last Guardian was still a thing.


The quality of writing in video games remained a source of embarrassment throughout this generation. Shit endings, reliance on stereotypes, dialogue that could have been written by a five year old, a lack of interesting female leads, bro-speak.... you know the drill. There are of course exceptions - this year both The Last of Us and The Walking Dead impressed me with their storytelling - but we need to demand more from our games and we must also stop overreacting to competent writing. We also need to tell David Cage to sling his hook. The lack of maturity present in video game writing is mirrored elsewhere in the industry. It is present in the language that we and publishers use, in embarrassing marketing campaigns from F.A.G.S to sexy nuns, the unfortunate state of video game criticism and the way we identify with our games. This is an industry that still has a lot of growing up to do.

This was the generation that Final Fantasy finally went to pot, as Square-Enix lost touch with reality. I was beyond disappointed in LA Noire, Lost Planet 2 was good but failed to live up to my lofty expectations and Assassin's Creed 3 was, well, it was Assassin's Creed 3. I don't think even Capcom knew what they were doing with Resident Evil 6, and Black Ops 2 put me off a series that I had always been happy to defend. Lollipop Chainsaw continued Suda 51's descent into mediocrity - I'll play Killer is Dead eventually but I can't say I'm looking forward to it. Finally, nothing could hold a candle to Vampire Rain: Altered Species, a game so bad that I couldn't even find pleasure in its crappiness.

I think that’s just about everything.
The End of a Generation