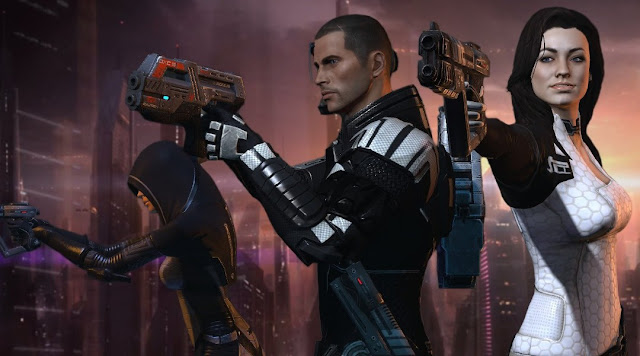 I'm writing a series of posts about the games and consoles of the seventh generation (PlayStation 3, Xbox 360, Wii, PSP and DS). It includes a Top 20 countdown, thoughts on the industry and lots more. The Rules

I really wanted to like Mass Effect but it just didn't work out. Mass Effect 2 (2010) was a different story. I had my reservations - see Mass Effect - but I figured I should give it a go anyway, if only to make use of my neglected Xbox 360. That proved to be a wise decision indeed.

There was a focus to Mass Effect 2 that is missing from most games of its size and ambition, and this made it very easy to enjoy. Its structure was simple and effective - recruit team members, earn their trust and take them on a do-or-die mission - and I always knew exactly what I was working towards. Even the smallest of ventures felt like a step in the right direction. Once a crew member had been recruited, my attention switched to earning their loyalty by helping them on a series of personal quests, which in turn increased their effectiveness. This process was repeated with each character, but it never felt repetitive, as each set of missions provided new insight into life in the Milky Way. I may have been racking up some serious air miles, but I was never allowed to lose sight of my ultimate goal.

The Normandy crew is one of my all-time favourite video game ensembles. While their individual roles and specialities were far from inspired – weapons expert, scientist, mechanic, good at getting angry etc. – they were an entertaining and likable bunch. Commander Shepard may not have been the most colourful of characters, but he held this unlikely group together. Freshly arisen from the dead – Commander Shepard is an anagram of Jesus Christ – my Shepard was good natured and an excellent dancer. He was fairly vanilla, but he didn’t need to entertain when surrounded by such an unusual cast.

I took every opportunity to learn more about my team, and I would dedicate entire sessions to running around the Normandy, shooting the shit with humans and aliens. The Dialogue Wheel made even run-of-the-mill conversations interesting, and time sensitive prompts kept my mind from wandering. Paragon and renegade options were always signposted, but I liked the surprise of not knowing exactly how each choice might play out. There's a big difference between shouting at someone and shot-gunning their face off, though the dialogue wheel didn't always make that distinction.

The conversations I enjoyed most were those with my non-human compatriots. Garrus and Shepard made for a great pair, Mordin was always entertaining, even when he was talking about genocide, and the gradual unravelling of Thane's past ensured that he was always one of the first stops on my rounds. The team was full of varied and complex characters, and uncovering new aspects of their story was often more satisfying than laying waste to intergalactic baddies. My non-combatant crew also had plenty to say, but unfortunately the vast majority of them were fed to a people-blender, when I was a bit slow in rescuing them from the heinous Collectors.

Interactions and excursions contributed to the ultimate success or failure of the final mission. Who lived and who died depended on your actions and choices throughout the game; ME2 was 90% preparation, 10% execution. It was a relatively straight forward operation - infiltrate the enemy base, rescue survivors, beat the boss then make a quick escape - and  If I hadn't been so fond of my crew it probably would have fallen flat. It tested my understanding of and attachment to the team I had assembled, and I was terrified of losing even one of them. I thought long and hard before deciding who should assume which role and was able to keep my team alive. No other game has had me on the edge of my seat quite like the final hour of Mass Effect 2.

Story and structure is important, but if the action hadn’t been up to scratch then ME2 would not have placed as high on my list. Third person shooter elements were expanded and polished, and once I'd gotten the hang of mixing biotics with bullets, I started to really enjoy popping heads. Bioware succeeded in encouraging the player to experiment with different combinations of skills and characters. Despite having my own favourites, I was always switching up my party, something I rarely do in other squad based games.

As was the case with Mass Effect 3, I was drawn to the detail and variety found in the Mass Effect universe. It was an old world, complete with its own politics, cultures, friendships and conflicts. Mankind was the brash newcomer; Asari, Hungor, Turians etc. had been zipping around the galaxy long before our kind had even begun to consider the heavens. I enjoyed being the new kid on the block and got a kick out of discovering the secrets and histories of alien species and planets.

I'm rarely drawn to Sci-Fi adventures, and the Xbox 360 was the odd-one-out in my last-gen console line up. Mass Effect 2 was the wrong kind of game on the wrong box, but that didn't stop it from winning me over completely.

I'm Commander Toomanywires and Mass Effect 2 is my second favourite game of the Seventh Generation.
The End of a Generation