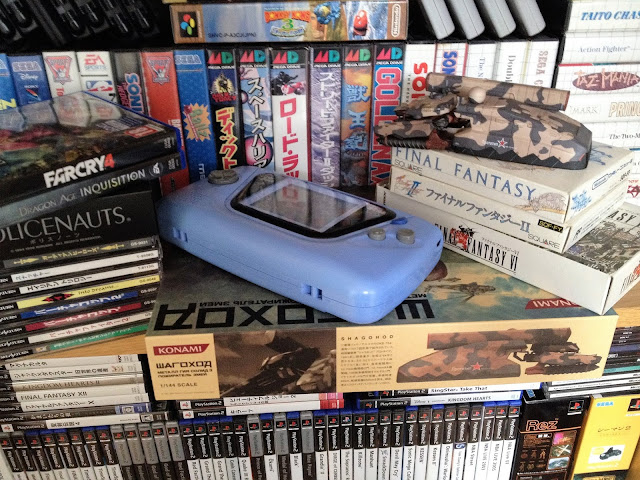 I've bought my fair share of games over the years. My Billy bookshelves are bursting with bits 8, 16 and 32, and stacked with discs of varying formats. I must have well over 500 games, a mix of current and retro, PAL and import, and a nice little stash of hardware and unnecessary peripherals.

However, I wouldn't call myself a collector. Rather, I accumulate games. I don't peruse EBAY looking for retro gems, or raid carboot sales at the weekend, but almost twenty five years of buying and playing has left me with a decent assortment. It helps that I don't trade-in and, with the notable exception of my original Saturn, have never sold-on any of my gaming possessions. I threw out a couple of over-sized peripherals when we left Japan, including my Densha De Go controller, which I deeply regret, but otherwise I have retained all my shit.

The weekend before last, I had to lug my game shelves across the corridor to make room for my daughter's new nursery. They were bloody heavy and it took far longer than expected to remove and re-stack everything. It was a massive pain in the arse, but I won’t be parted from my game boxes. I love perusing my collection, staring at spines and getting all nostalgic. I make quite strong connections between games and the time in my life when I first played them, which is one of the reasons why I'm loath to offload any of them. Final Fantasy VII-IX remind me of my last few years at school; TimeSplitters 2 brings back vivid memories of multiplayer mayhem in university dorms, and if I so much as glance at Street Fighter IV I'll start daydreaming about good times in Tokyo. I like owning these games, even when I know there's little to no chance that I'll ever play them again.

When it comes to the Japanese Saturn, I suppose you could accuse me of being a collector. I started buying Saturn games in an effort to rebuild my lost PAL collection, but it soon went beyond that. I enjoy rediscovering games I remember from my old Saturn magazines, and have been encouraged by the relative affordability of buying them in Japan, which is where I bought all of my selection. The bulk of my 130+ Saturn games were purchased in Akihabara, Tokyo from 2006-2009; back then, you could easily pick up ten quality games for ¥1000 ($8/£5 approx.). The selection has dried up considerably in recent years, and prices have gradually increased, but I'll still buy a handful of choice titles each time I return to Tokyo.

In spite of my hoarding, I’m more open to going all-digital than ever before. However, prices would need to fall in-line with physical copies, and receive the same kind of discounts before I'd make the jump on home consoles. Also, I want to see what happens to my library of digital games on PS3, once Sony has completely abandoned the last gen. I'm interested to see how our digital games will age and for how long we'll be able to access them on obsolete hardware. However, I do like the ease of curating a digital library and have already made my PS Vita a digital-only platform, so I’m getting there.

There may come a time in the not too distant future where I stop adding new, boxed games to my bookshelves and put my trust in an all-digital tomorrow. However, I can't see myself letting go of my existing collection anytime soon, so keep your filthy hands off my Shagohod.
Contemporary Games Retro Gaming