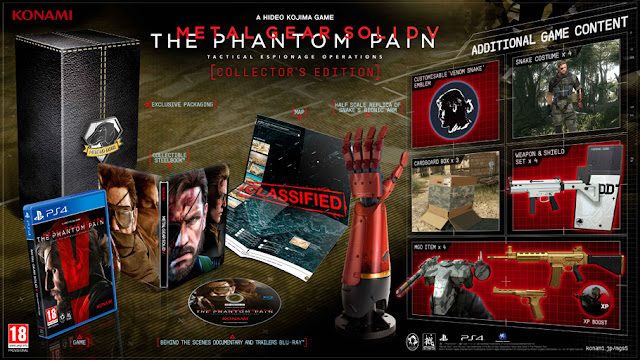 The answer is no, but at the same time yes. Hideo Kojima wants me to buy a replica of Snake's bionic arm, half-scale, and since Phantom Pain is 100% absolutely his last Metal Gear Solid, who am I to say no. My MGS3 Snake Eater Premium Package is one of my favourite video game possessions, and I also have the HD Collection Limited Edition set, so I do have prior history when it comes to Kojima and oversized boxes. However, the big difference is that I bought both of those when they were heavily discounted. I purchased the HD Collection a few months after release at 50% off, and Snake Eater was a second hand pick up for less than £30 - that just shows you how quickly some of these supposedly "limited" editions depreciate in value. As any financial adviser will tell you, invest in land, not collector's editions.

Plastic statues and extra boxes are a great way to celebrate your fondness for a game or series, and I suppose that's why I'm considering what I know is a foolish purchase. I love MGS, and any new entry in the series is a major event. That being said, if the regular edition of the game was £35 instead of £50, I'm sure I'd balk at upgrading to the bionic arm. I could never justify going from £35, which I feel is a reasonable price for a new game, to £100, but the jump from £50 to £100 doesn't seem quite as heinous. I realise that makes little sense, but my reasoning is that if I'm going to overpay for a game at £50, I might as well overpay at £100 and get some extra rubbish. And this isn't just any game; Phantom Pain is my most anticipated of 2015, and probably of the last five years. So get off my case, yeah?

So, in conclusion, I'm undecided about Snake's bionic arm. I've always wanted an extra arm for my game shelves, and my MGS excitement level is currently through the roof, but I know that £100 is too expensive for what's on offer. Regardless of how much I decide to spend, I'll be playing new Metal Gear Solid in September and that's definitely worth getting excited about.
Contemporary Games