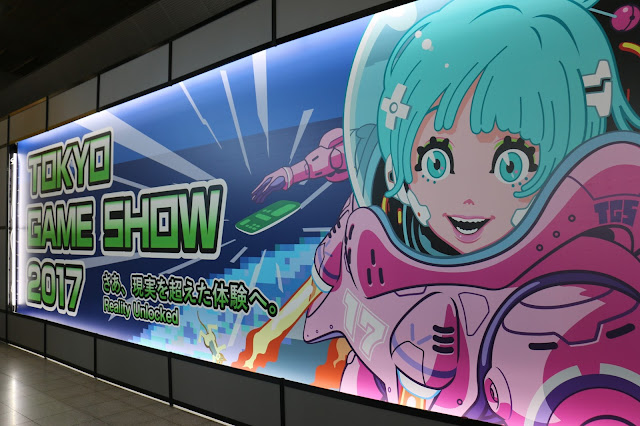 Tokyo Game Show is well and truly over. I have returned to reality, a reality where I don't get to play new games for two solid days, bump into industry luminaries, drink on a school night, talk about games with strangers or buy a Sega Saturn phone case without fear of reprisal.

All I have left to remember TGS by is a Monster Hunter World Towel and a massive bag with Kazuma Kiryu on it. Well, those things and a folder full of badly lit photos of booths, people playing games, and me standing next to signs. 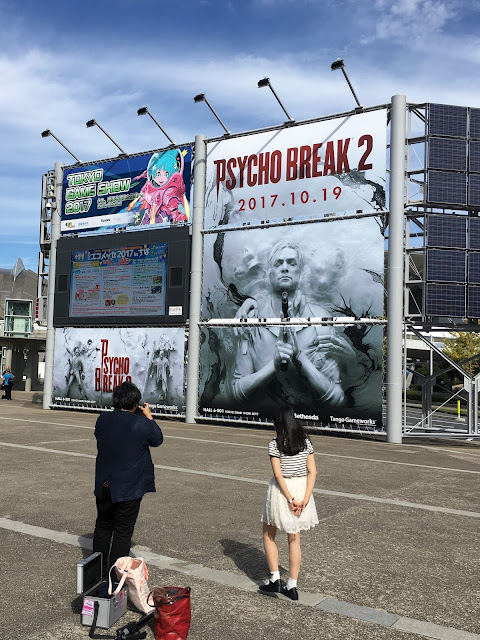 Bethesda's Psycho Break 2 was everywhere at this year's show. The front of the main exhibition hall was plastered with huge posters for Shinji Mikami's sequel. Known as The Evil Within 2 in the West, it was playable at Square Enix' booth, as they have a partnership with Bethesda in Japan. The line was consistently long, so I didn't get to try it, but then it's out next month anyway. 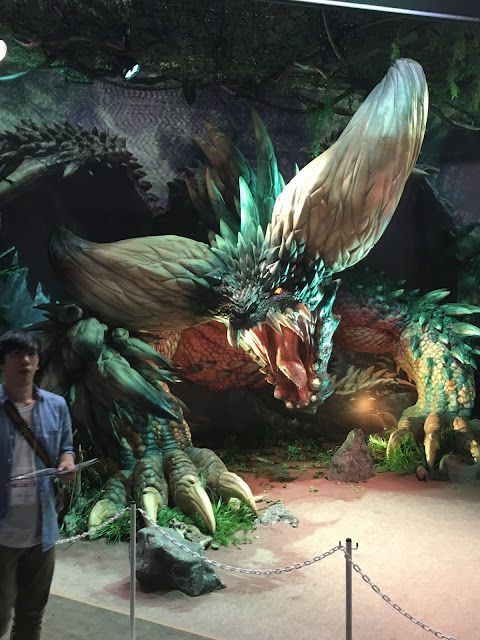 The picture that received 200 Likes and 50 RTs on Twitter. That's a year's worth of social media love for me, so I was very happy. This frightening monster was emerging from the side of  Capcom's booth. Despite his diabolic appearance, he wasn't nearly a terrifying as the lines for the Monster Hunter World demo on both the business and public days. I played it twice, because I'm smart, and will post impressions later this week. Spoiler: it was worth waiting for. 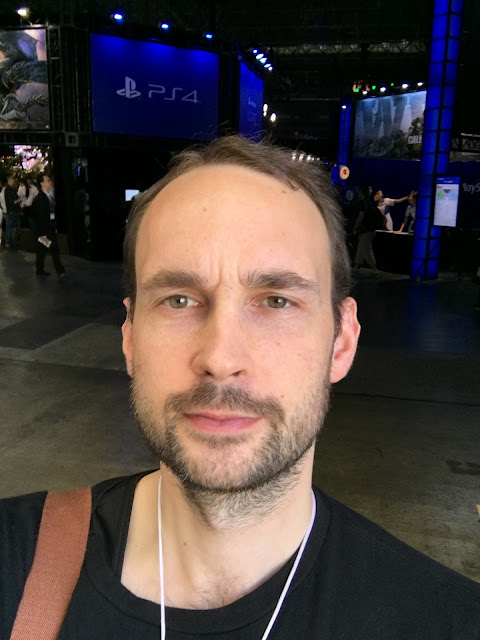 This is me trying to decide whether to have a Roast Beef Rice Bowl or a Katsu Curry for lunch. I had Okonomiyaki instead, because my head started to hurt from all the thinking. 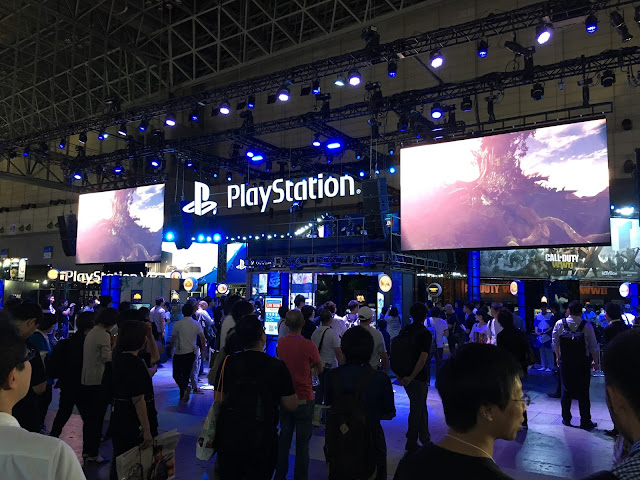 Sony's booth was as busy as ever. Monster Hunter World was granted prime real estate for a third party title, including a photo stage where you could have your picture taken while roasting an over-sized, Monster Hunter drumstick. Call of Duty was popular, VR was by-appointment only, and there were a number of smaller demos out back. You'd queue at the rear of the booth for an hour, then get called out front and ushered into yet another line before eventually getting your hands on something new. I waited an hour and a half for Code Vein, and it really wasn't worth it. 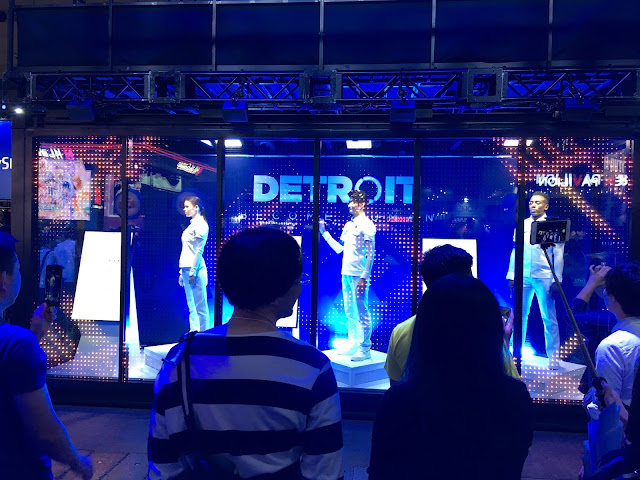 Sony were giving Detroit: Become Human the hard sell. The figures inside the glass case were not mannequins, but poor-to-do models, actual human beings who stood still for ages while maintaining blank expressions. They looked about as excited for David Cage's latest game as I am, by which I mean that I'm not excited at all, if that wasn't clear. 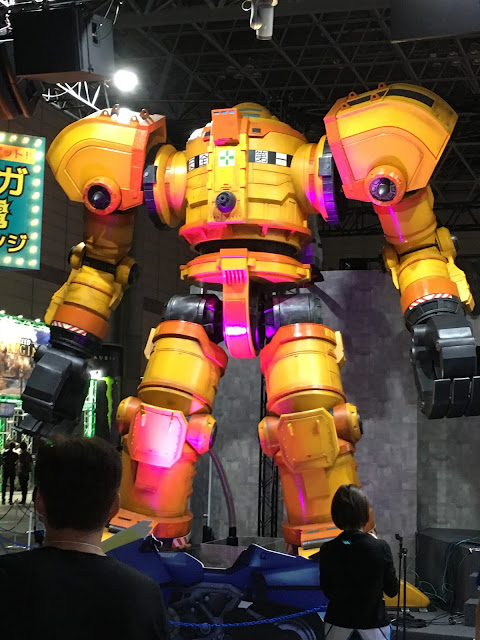 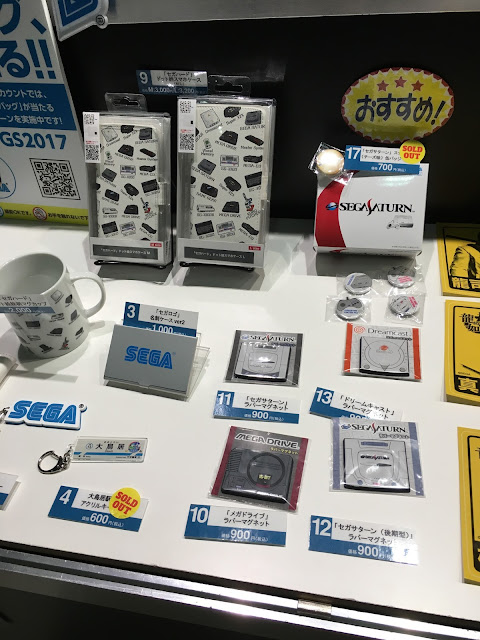 As per usual, the merchandise hall was filled to the rafters with things you'd be ashamed to show your loved ones. Gaudy t-shirts with pictures of scantily clad school girls, bags in the shape of retro consoles, criminally over-priced soundtracks; mugs. I bought nothing, though I was sorely tempted by the Saturn fridge magnets and a delightful set of Sonic the Hedgehog coasters, perfect for when your dinner guests are just as mentally disturbed as you are. 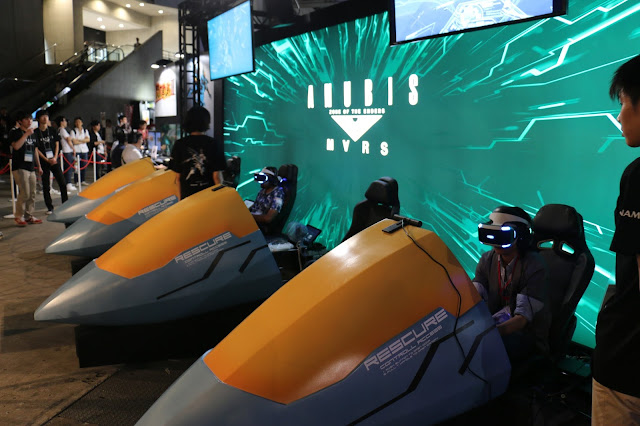 Zone of the Enders VR was extremely popular, in no small part because you could sit down in these lovely mech chairs. Konami actually had a fairly busy booth this year, featuring Metal Gear Survive, Love Plus Plus (whatever number of pluses we're up to now) and a couple of other, smaller titles. 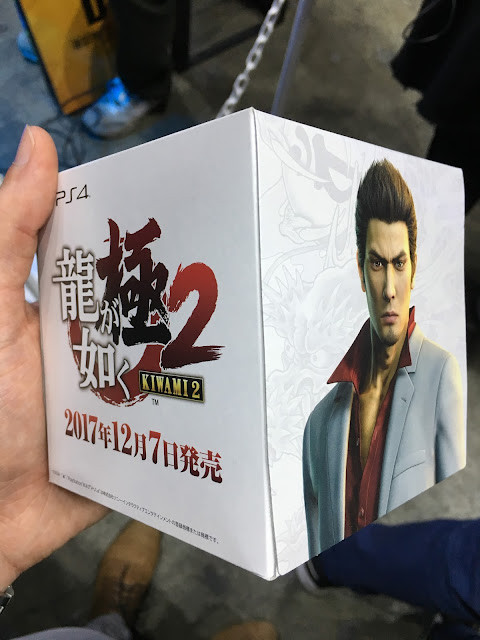 My Yakuza Kiwami 2 tissues. This was the second year on the trot that Sega had given out tissues as a gift to people who played the latest Yakuza demo. I threw mine away because my bag was full and I don't need to see Kazuma's disapproving face every time I reach for a tissue. 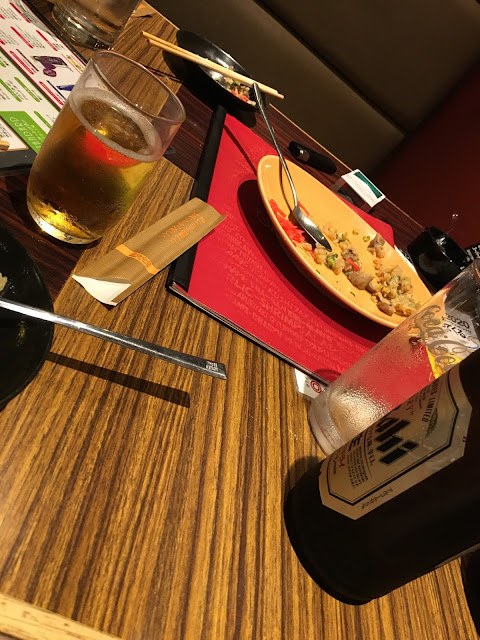 On the evening of Day One, I grabbed dinner with an old friend, which included two hours of all-you-can-drink nonsense. I then moved on to 8-4's post-TGS party, where I drank more and had a good chinwag with lots of other good people. A night so exciting that I forgot to take any pictures, other than the off-centre stunner above. That's my glass of beer to the left; the scraps of food are what remained of our Chahan. If you look carefully, you can also make out a spoon. 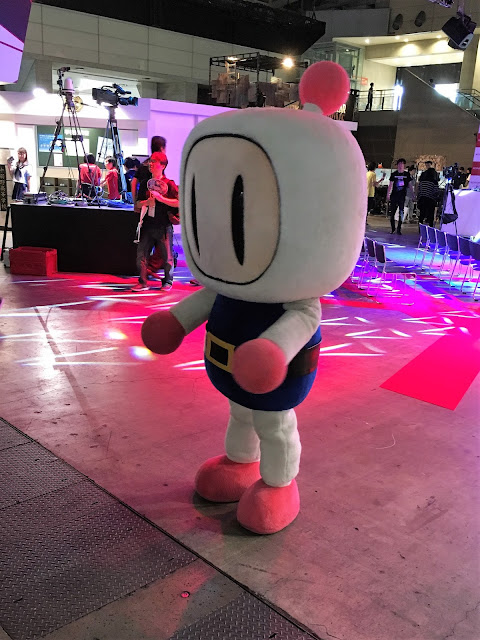 Bomberman was acting his age, looking tired and confused. He was later asked to leave the venue after making some unkind comments about Hideo Kojima.