Tokyo Game Show and the Yakuza series go together like wine and cheese, Sonic and Tails, Nintendo and needlessly complicated voice chat functionality. Going back to the days of Yakuza 3, the series has had a major presence at the show and has dominated Sega’s booth almost every year since. It’s just not TGS if there isn’t a new Yakuza to play.

Yakuza Online and Hokuto ga Gotoku, a Fist of the North Star game with a Yakuza twist, were both present but not playable this year. Yakuza Kiwami 2, however, was playable across two different scenarios. A remake of Yakuza 2, with many added features, it was available at both Sega and Sony’s booths.

The demo was lifted from Chapter 2 of the full game, and contained two different scenarios. The first followed series protagonist Kazuma Kiryu in Osaka, as he visited Sotenbori, a fictionalised version of the Dotonbori district in Japan’s second city. The other scenario starred the sometimes antagonist, sometimes protagonist Goro Majima, as he runs a few bloody chores in the familiar setting of Kamurocho, Tokyo. He is a new addition here, as he did not feature as a playable character in the original. The two leads play differently, though the activities they can pursue are very similar. Both scenarios looked the business, as Kiwami 2 was made in the Yakuza 6 engine. However, both had partially-voiced dialogue, somewhat of a step backwards from the fully-voiced Yakuza 6.

Kazuma’s demo opened with an extended cut scene. He’s riding the bullet train down to Osaka with another series staple, Daigo, who’s looking much younger and more dangerous than we are used to. As you’d expect from the series, this cut scene was cinematic and well directed, though I did stifle a giggle when the camera rested on a can of Boss Coffee for what seemed like ten seconds. Yakuza Studio has never been averse to a bit of product placement, but I don’t think I’ve ever seen it done quite as blatantly. It did make me want to grab a coffee though, so they clearly know what they’re doing.

Once the cut scene was over, I was free to wander the streets of Sotenbori. There was a story-related marker to head for, but I decided to roam and partake in the nightlife instead. As you’d expect from the series, the town was teeming with lowlifes spoiling for a fight, a fight that I gave them over and over. I put my fist through countless faces, smashed bicycles over badly dressed street scum, and even ran a sword through one unfortunate young man. As is always the case in Yakuza, they were all able to walk away from their beatings, despite my clearly murderous intent. 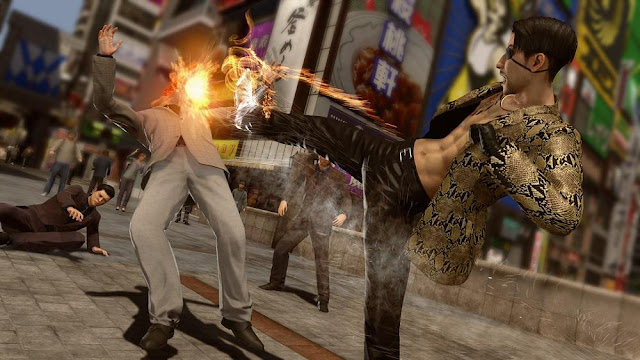 While Kazuma’s roughhousing is hefty and deliberate, Majima’s is faster and more fluid. His style is a flurry of spins, kicks and slashes with his always-equipped blade. It makes for a nice contrast, though the inability to pick up random items and wield them as weapons did make his style feel a little more repetitive. Both characters pull off various, devastating Heat Actions, special moves which are time and position sensitive. Majima’s were particularly entertaining and over the top. In one instance, he threw his blade into the air, span, caught it on his foot and kicked it into the chest of his poor assailant. As his victim writhed in pain, Majima re-entered the frame and cheerfully proclaimed “You’re weak, aren’t you!” Yakuza’s combat is as entertaining and crazy as ever.

Playing as Majima, I did notice some performance issues. The shift between exploring and combat was not smooth, with sound effects lingering where they should have ended cleanly, and the game stuttering for a few seconds as it entered and exited combat. I didn’t notice this in the other side of the demo, so hopefully the issue is confined to the demo build, and not something we’ll see in the finished version.

When I wasn’t kicking seven shades out of the locals, I was checking out the countless extracurricular activities that were available in both Osaka and Tokyo. I was only able to sample a tiny amount in the limited time available to me, but most of my favourite distractions appear to be accounted for. Visiting karaoke, eating out, doing questionable things with scantily-clad ladies and of course stopping by the SEGA Arcade were all possible in the demo. I spent most of my time with Kazuma sat at the arcade, playing full versions of Virtua Fighter 2 and Virtual On. These little distractions are what make Yakuza so endearing, and I’m always excited to find out what will appear next.

As a long-time fan, I’m very happy to see the series gaining steam in the West. Games that once were Japan-only are now being localised and enjoying success elsewhere. There has been no news thus far regarding a western release for Kiwami 2, but there’s little reason to believe that it won’t be localised. Fingers crossed Sega and its partners will do the right thing.