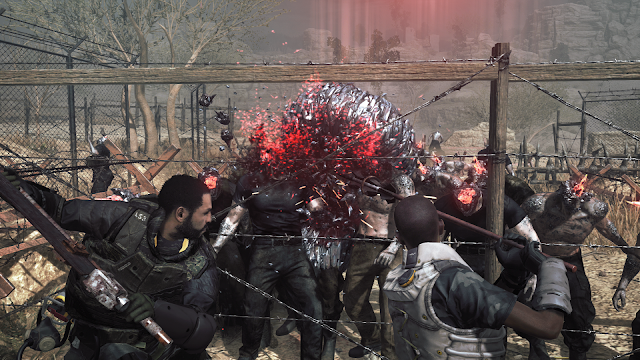 Konami has received a fair bit of flak since their very public separation from well-loved movie critic Hideo Kojima. Everyone decided that Konami was evil and that anything they did from there on out would be bollocks. The prospect of them continuing the Metal Gear series without Kojima was blasphemy.

It’s fair to say that Metal Gear Survive has been up against it since the outset. The internet was outraged, there was uproar on social media, morons committed to boycotts, and there were snarky comments and pissy previews from people who should know better. Don’t get me wrong, I’d much rather see the franchise continue in the capable hands of its creator, but I’m also not going to dismiss Survive out of hand. It’s based on the MGS V engine and gameplay, both of which were near flawless, and the development team is stacked with series veterans. That’s a pretty good foundation, I reckon.

I went into the Tokyo Game Show demo with an open mind, and found a game that was solid but far from spectacular.

So, Metal Gear Survive is a survival action-adventure game, set in an open world. Survivors of the Mother Base attack from MGS V Ground Zeroes have been transported to an alternate reality, which is teeming with zombie-like beings. You and your comrades want to get home, naturally, so they fight in hopes of discovering a way back to their reality. For the player, this means infiltration and defensive missions, fighting for resources and protecting wormholes back to a non-zombiefied world. It’s a team shooter, best enjoyed in 4-player co-op but also playable on your lonesome, supported by AI companions. The TGS demo was multiplayer-only.

The demo asked us to choose between two uninspired classes: Fighter or Shooter. The Fighter looked beefier and had more melee options, while the Shooter was slighter and came with a surprisingly fun bow. It was suggested that class wouldn’t be a huge concern in the full-game, as there would be plenty of customisable options, as well as multiple weapons to craft and choose from that would ultimately shape your character and experience. With that out of the way, we spawned into a training area, where we were encouraged to familiarise ourselves with the controls and items in our inventory. Anyone who has played MGSV would feel instantly at home here.

Once we’d tired of shooting the shit out of dummies, our team was transported to a wasteland full of scrap and ruins. It was very drab, but functional. We made our way to a collection of buildings still standing and were given a few minutes to fortify our position. Our arsenal included metal fences, small buildings, explosives, traps and mortars which we haphazardly dotted around the structure. In the centre was a wormhole which we had to protect. If too many zombies made their way through, it was game over. Snake? Snaaaaake!

The enemies came in waves, each one more challenging than the last. Within a minute or two, the entire team had run out of bullets and had resorted to more primitive means, hacking and slashing at the encroaching hordes. The bow proved useful in this situation and was rather satisfying. Our struggles to locate ammo dominated the demo. It caused more frustration than suspense, and I would’ve much preferred to have been better equipped.

Our lack of resources aside, it was satisfying bringing down the zombies. In true MGS style, most enemies had throbbing and/or colourful weak spots, in this case crystals that could be smashed for an easier kill. It was all a bit mad, with baddies coming from all angles, including some that were falling out of the sky. We also had to look out for larger zombies, with huge red heads that would charge our defences and explode before they perished. We survived by the skin of our teeth, as I revived multiple team members at the very last moment, as the dim-witted zombies ran straight past me in a beeline for the wormhole. This was the height of our team cooperation; reviving each other was the only thing we really needed to do as a group, and I didn’t come across any rewards or special abilities that required teamwork.

War has most definitely changed. Probably not for the better, but then Metal Gear Survive isn’t trying to be MGS VI. It’s attempting to do something a bit different with a well-loved franchise, but the jury is still out on whether that will be a worthwhile venture.

Be sure to check back over the coming days, as I'll continue to post lots of hands-on impressions from TGS. I'm also writing over at Critical Gamer
Tokyo Game Show '17