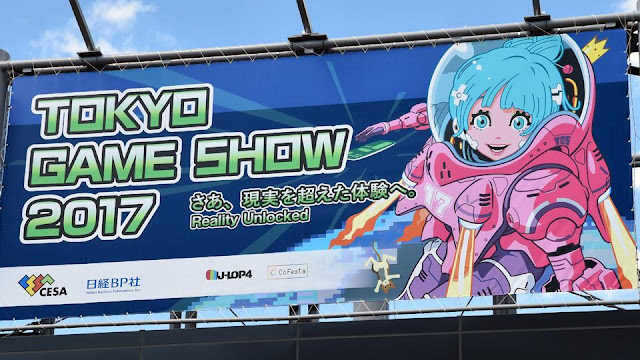 My Tokyo Game Show is finished, as are my feet. Two days of games, socialising, drinking and standing in queues was two days well spent.

Video games are lovely, aren’t they?

It was a hectic 48 hours and I’m looking forward to getting a good night’s sleep tonight, before I tackle a few previews tomorrow. The show floor was busy and there was a good mix of games, though it was missing a big, dominating attraction, like VR last year.

I originally intended to post a Day One round-up last night, but I accidentally attended a two hour, all-you-can-drink session, and then went to a post-TGS party where I continued to drink myself silly. By the time I got back home, I was in no fit state to blog. So instead, I’ve put everything together here for your perusal.

I’ll be posting a photo blog and some tasty previews over the next week, so keep an eye out for those.

There weren’t many games that I needed to play this year. As the doors opened on Day One, I wasn’t even sure which demo to run for. It was a last minute decision to head straight for Monster Hunter World, which turned out to be very wise. Overall, I was pleasantly surprised by what I tried. I didn’t play a huge amount – despite being British, I have a low tolerance for queueing – but I enjoyed almost all of what I did. I had a go at the following:

Monster Hunter was the highlight and will absolutely be a day one purchase. It was probably TGS’ main attraction, and I’ve already begun to suss out who I’ll be hunting with come January.

The only games that I regret missing out on are Namco Bandai’s kaiju/robot/disaster thingy, City Shrouded in Shadow, and Bethesda’s The Evil Within 2. Both consistently had wait times north of 90 minutes, so I passed. I wanted to play some games in the sizable Indies section, but I lost track of time and my feet were falling off, so I had to call it a day.

Of all the trailers, the teaser for Left Alive was of most interest. That could be a good one.

I did myself proud in the Monster Hunter World demo, clearing the hardest of the three hunts all by my lonesome, and even slicing off a dinosaur tail. My four player team in Metal Gear Survive earned an S-rank, though honestly it didn’t feel like an S-rank performance. I saved the day at the very end, reviving the entire team and capping off what had otherwise been an underwhelming outing, where I got stuck in a fence and spent most of my time unsuccessfully searching for ammo.

I was awful at Code Vein, dying countless times over the course of the twenty minute demo. In my defence, everyone else seemed to be having similar troubles so it was definitely the game’s fault.

I was disgusted to find that the camera X and Y axes were inverted by default in the Yakuza Kiwami 2 demo. Fortunately, I have years of experience playing this series in Japanese and knew exactly where in the menu to look and which options to change. I even helped my friend do the same thing, when the booth attendants were unable to help him. It seems that I have finally mastered Japanese. Video game menu Japanese, specifically in Yakuza games. Fluent.

The Spectre of Kojima

Hideo Kojima and Konami may have gone their separate ways, but his presence could be felt at Konami’s booth. Metal Gear Survive takes the gameplay of MGSV and puts it in a very different setting, to mixed results, and Zone of the Enders VR was pulling in the punters. Gone but not forgotten.

I had Hiroshima style okonomiyaki on Thursday and a katsu curry with cheese today. Thanks for asking.

If you loved the way that Square Enix milked FFXIII for all it was worth, then you are really going to appreciate what it’s doing with FFXV. Despite being almost a year old, it was a huge part of SE’s TGS presence. There was a multiplayer demo, a separate booth for a mobile spin-off, a DLC demo and trailers for a VR fishing game. It seems that Noctis and the boys are here to stay.

Not a great year for free stuff. The glossy catalogues of old are few and far between, and no one is giving away key chains, t-shirts or bandannas. I got a box of Yakuza tissues (straight in the bin) a massive Yakuza bag (in a different bin), a Metal Gear Survive sticker (my daughter likes stickers) and a Monster Hunter World towel (soon to be in a bin).

I remember a few years ago they were giving out free beers to overseas attendees. No such luck this time around. Video games are rubbish.

Perhaps the most unusual trend at this year’s TGS was people standing in boxes. Sony had a rotating core of “androids” that stood in a large perspex box, standing as still as they could and trying not to show any emotion. The display was promoting Detroit: Become Human which I can only assume is about putting people in boxes. At a different booth, I saw a young lady posing in a much smaller box. I’m assuming she was part of the booth display and hadn’t just got stuck in a box. I wonder if anyone let her out.