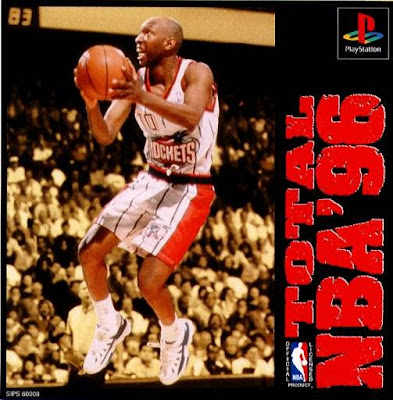 I'm in need of focus this week, as the work-from-home marathon enters its second month. So I'm going to use some of the time I'd usually spend commuting to write a short post every day, Monday-Friday.

During the 1994-1995 season, Sam Cassell appeared in all 82 regular season games for the NBA Champion Houston Rockets. A key role player, he came off the bench in all but one of them. He was good, and would later become very good, but he was never a star nor a household name. He was certainly not someone you would expect to find on the front cover of an NBA video game.

Yet there he is, gracing the sleeve of the US and Japanese versions of Total NBA '96 (Japan and EU) / NBA ShootOut (America land). He is immortalized mid-layup, presumably about to notch up two more points. Exciting stuff for fans of layups and/or Sam Cassell.

The Total NBA series was generally well received, before fizzling out in the early-mid 2000s. It was developed in-house by Sony as an alternative to the then-dominant NBA Live franchise. Wikipedia tells us a great deal about the '96 entry, including, but not limited to this gem: "NBA ShootOut is a game using polygon players and motion-captured animation". As if that weren't enough, we also learn that Gamepro's Scary Larry strongly recommended it. Furthermore, EGM's Video Cowboy succeeded in saying nothing of value when he proclaimed that "the game has solid gameplay and a big-league look." A treasure trove of information from writers ashamed to share their real names, but nary a clue as to why Sam Cassell was on the cover.

I don't mean to disparage Sam, as he was genuinely a very good NBA player. While he was relatively unknown in '96, he blossomed into a borderline All-star from the late-90s to the mid-00s, and is the proud owner of some very large balls. It's just that I haven't been able to get this cover out of my head the last few weeks, after spotting a copy for sale online.

Did Sam know someone on the dev team who pushed for his appearance? Did he know something incriminating about someone on the dev team? Was he the favourite player of a decision-maker, or was his appearance the result of an in-joke between two Sony humans? Or did the people at Team Soho know fuck all about the NBA, and picked the first image they found of a man playing the basket balls.

London, circa 1996
Steve: This is Michael Jordan, right?
Another Steve: Probably.

However, I will give the Soho Team a lot of credit for the follow-up. Total NBA 97 featured a patch of basketball-like rubber plastered across the front cover. Must've cost a fortune to produce, but I can absolutely get behind this kind of foolish commitment to aesthetics.

Team Soho were not alone in their odd approach to NBA covers. The picture below is the Japanese version of Tecmo Super NBA Basketball. It features a non-star (Loy Vaught) of the league's most pathetic franchise (Clippers), taking the most vanilla shot in basketball (a layup). The fact that he appears to be missing the shot further cements its position as an all-time head-scratcher.

As you may have gathered, I'm really missing the NBA. 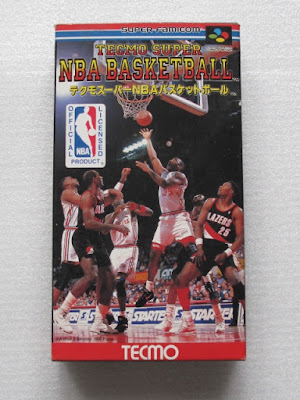