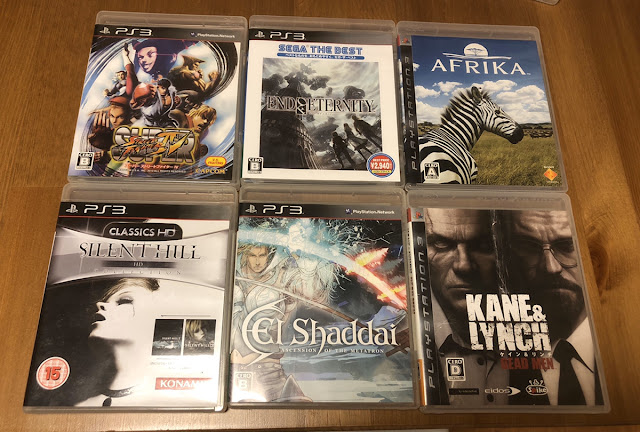 It's been ten days since I last scoured a video game bargain section.

Almost two weeks since I rummaged through a junk bin, visited a Book Off, shook my head disapprovingly at an over-priced Saturn game, or fingered an off-white Famicom.

I've been working from home most of the last week and a half, and have kept myself stashed away at the weekend. Even if I were moving more freely, I'd think twice before visiting a used-game store. Nerds are filthy creatures.

I miss the excitement of finding an unwanted game from generations past, for only a couple hundred Yen. A game that passed me by initially, now at a price that's perfect for a test drive, with limited expectations and no promises of lengthy time investments. A chance to add yet another game to my "tried that" list and cement my position as the unassailable gamer. A guilt-free taster for the cost of a convenience store coffee.

Pre-working from home, I had bought a handful of very cheap PS3 games. I adored the PS3. It was a troubled generation for Sony, sure, but I enjoyed it more than any other. Great games at a time when I had disposable income, fairly limited responsibilities and my free-time was still mostly my own. I might have played over 180 games on my PS3, but there are still a handful of titles that I missed that I would very much like to sample, even if only for a few minutes. Some of them I genuinely want to play, whereas others are a perverse curiosity.

So over the last week, I put aside a very limited amount of time for each of the games in the photo above. My PS3 still works, the controllers still charge, the XMB feels gloriously antiquated and the store, which I couldn't resist opening, still runs like treacle. Each time I loaded up a new game, I was amazed by how quickly installs and updates ran. I have become accustomed to feeding new discs to my PS4 at least two hours before I'm going to play them, in anticipation of a lengthy install.

Let's start with the best of the bunch, that being Super Street Fighter IV. My daughter and I have been rinsing SF games over the last month or so, on the Saturn, Dreamcast and more recently on the PS4 with the Street Fighter Collection. They are easy to pick up, play, and enjoy together. Super SFIV might be our favourite of the bunch. I had vanilla IV at launch but never upgraded beyond that. Super is vibrant, accessible and far superior to SFV. It looks amazing and my daughter and I continue to greatly enjoy running through the roster for bout after bout. Two hundred Yen very well spent.

Kane and Lynch, on the other hand, was significantly less pleasing. I envisioned an overlooked gem, gritty as fuck and fucking gritty, in part because I had heard others refer to it as such. It has since dawned on me that those people were probably talking about the sequel and not the original, which happens to be crap. The textures are grotesque, though I may be misremembering what early PS3 games looked like, and everything looks bizarrely smooth, like it has been sanded down with a special ugly-sander. I was shooting through enemies and the action was a stuttering mess. I still like the premise - two middle-aged, ugly gentlemen acting violently towards other violent people - but that might have been the only redeeming feature. 8/10.

Afrika is a game about big-game-bothering photographers. As the paparazzi of the savanna, you must sneak up on unsuspecting animals in your jeep, while wearing an inconspicuous orange vest, and take a picture. Can you get a shot of a zebra with his pants down? National Geographic thinks you can. I can see why this was held aloft as an early example of the PS3' power. Visually it would have wowed 2008-me, and the orchestral soundtrack is special. A nice snapshot of its time, though admittedly a dull one.

Edge of Eternity, or Resonance of Fate as it was known in the West, is a an RPG about shooting faces off while also doing ballet, as is my understanding. The opening is quite impressive and there's a lot here that I'd probably enjoy, were I to put some real time into it. Interesting town design, pretty haircuts, face shooting, a lovely score, and what looks like a deep and nuanced battle system. El Shaddai likewise benefits from a unique style that masks the visual limitations of a ten-year-old game. It's also a little mental, but in a good way. You play as an angel, maybe, who dresses like David Bowie. His mate is Lucifer, of Hell fame, only he looks like a very handsome and presentable young man. I wrapped up my mini-play by smacking ten shades of shit out of a massive eyeball in a hoodie. I'm intrigued, and may play some more.

I haven't gotten around to trying the Silent Hill HD collection yet. Get off my case, yeah?