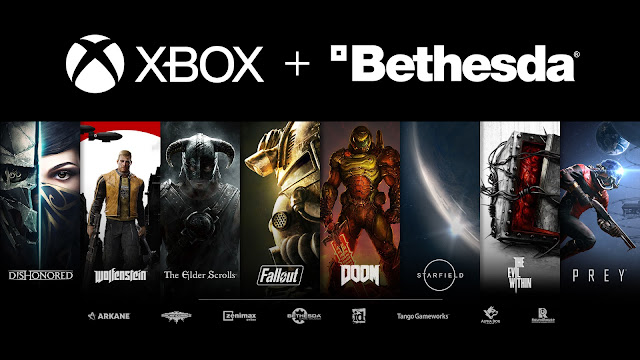 $7.5 billion is a lot of money.
Yesterday, it was announced that Microsoft is buying ZeniMax Media, parent company of Bethesda Softworks, in a move that is set to shake up the games industry. Shake it up proper good. This deal brings a number of studios and franchises under the Xbox umbrella, including The Elder Scrolls and Fallout, and it came just 24 hours before Series X/S preorders are set to go live. Truly, exquisite timing.
The news hit twitter last night, just as I was settling down to play some Judgment on my PlayStation 4 entertainment system. I'm enjoying Judgment, but it has fallen victim to several distractions that have prevented me from becoming fully invested. These have ranged from trying to close a deal on a house - it fell through - to an uncharacteristic NBA 2K bender that I might write about later this week. Microsoft throwing its money around was the latest setback for Judgment, ensuring that I went to bed having barely played it. The Mole is getting away with murder.
Anyway, $7.5 billion is a lot of money, as we've already established.
My thought process, as I read the news:
1. Can they do that? (Yes, they can).
2. What? (Yes)
3. Christ. (Yes)
4. That amount of money seems unreal.
5. How much did MS pay for Minecraft? ($2.5 billion)
6. Game Pass is going to be amazing.
7. I wonder how much Take Two Interactive would cost? (more than $7.5 billion).
8. I hope this wakes Sony the fuck up.
9. Financially, Sony simply can't compete with MS.
10. MS isn't going to do any more of those stackable Game Pass offers, is it? Shit.
On the surface, a purchase like this is perhaps good for the industry but bad for those of us who want to play the games. Or at least those of us who don't have the means or desire to shell out for two or more platforms. Phil Spencer has already said that future Bethesda titles may appear on other consoles "on a case by case basis", and MS does have a history of this with Minecraft. Even so, new Elder Scrolls, Fallout, Doom, Wolfenstein etc. will appear day one as part of your Game Pass subscription, a service that now has 15 million active members. You have to expect that cross-platform releases will come at a much later date, if at all, and won't be prioritised.
Game Pass continues to be hugely attractive, and the Series X and S are looking more appealing by the day. I still won't be buying one at launch, because there is no good reason for me to have a new PS and Xbox right now. However, I'll almost certainly break down and buy a Series S come Elder Scrolls VI, if not before.
$7.5 billion is a lot of money, but if you've got it, you might as well spend it. Good on Microsoft for thinking big.
Contemporary Games