A Shell of a September 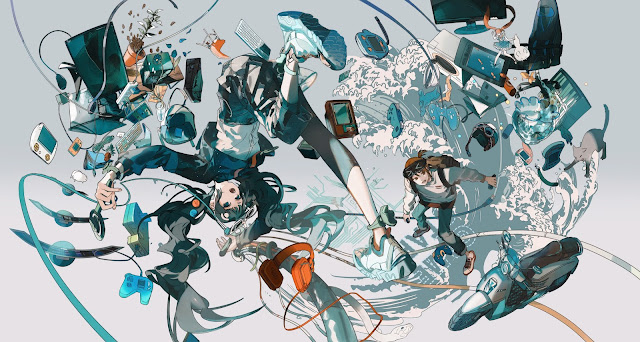 September is supposed to be the best month. An early Christmas, full of games, games speak and me proudly wearing a press pass. September is supposed to be the month of Tokyo Game Show, but not this year, for obvious reasons.
For 2020 at least, TGS will switch to an online format, with countless streams running from this Thursday. Streams that even normals, like you, can watch. I didn't even need to present my flimsy press credentials or hastily print off some official looking business cards. I won't be sending out dozens of to-be-ignored pitches to online editors, or spending a week carefully composing preview posts for my audience of twenty - I love you all, btw. They'll be no hands-on demos, no Yakuza tissues, no profanity-laced tirades on twitter about filthy nerds, and no smug pictures of me standing next to someone/thing important. I won't be getting pissed-up at industry parties, and I won't be catching up with friends. I'll miss not being in my element for two straight days.
I love Tokyo Game Show, as you know: TGS 2019 - 2018 - 2017 - 2016 - 2012 - 2011 - 2010
Sat at the brink of a generational handover, this year would've made for a good TGS. Microsoft wouldn't have been around, but Sony would've had plenty to say. There wouldn't have been PS5 units on the main floor, but there'd have been plenty of demos behind closed doors. Maybe we'd have learnt more about the future of Yakuza; Capcom would've been keen to share about Monster Hunter and Resident Evil, and perhaps Square Enix would have told us more about Final Fantasy XVI. There might have even been a surprise a two, surprises that will certainly be absent from the streams.
Fortunately, September has otherwise been a very eventful month in the world of video games. We finally got our next-gen prices and dates, only two months before launch. Microsoft, despite the confusion regarding Xbox SKU, seems more certain of its direction for the coming generation, and I was impressed that it set the bar by making the first announcements and taking a very aggressive approach to pricing with the Series S model. Sony, on the other hand, can't get its story straight and is already on the back foot. That many major retailers haven't followed the official announcement re. timing of pre-orders suggests that this was all very last minute, and Sony was unsure about their pricing and timing.
All things being equal, I'd opt for an Xbox and a Game Pass subscription, but they're not equal. I'm going with PS5, a decision based solely on the strength of the first party games. I strongly dislike the look of the PS5 and I'm very concerned about the price increase for software. I've seen all the arguments for a price bump, mostly centered around the increase in production costs. However, they often miss the point that wages aren't increasing with inflation and our disposable income is shrinking. If costs are spiraling, you focus on making your games more economically viable, you don't just say fuck it and double down. With Game Pass, MS has read the room. With their typical hubris, I'm concerned Sony is heading down a dangerous path, one that it's been down before.
Despite my concerns, I'm still buying a PS5, and that probably says it all. Or at least I want to buy one. The pre-order process in Japan is a mess, and I've yet to have any joy. Most retailers are running lottery-style applications that start this week, as opposed to last Friday when Sony said things would kick off.
Hardware aside, Nintendo made a splash this month with Super Mario 3D All-Stars and we also saw the long-rumoured, Switch-exclusive Monster Hunter Rise for the first time. Available next spring, I'm really hoping it'll feature local co-op, or some sort of local-network play, so my wife and I can recapture the fun we had with MH3 Ultimate on the Wii U and 3DS. If my daughter can join too, all the better. Hopefully, I won't need to buy two more Switches to do this. Oh god.
And yeah, that Mass Effect Trilogy announcement has to be coming this week, right?
I'm Commander Shepard, and September is my favourite month in the gaming calendar. Just not this year.
Contemporary Games Tokyo Game Show '20