The Goliath and Peace & Quiet 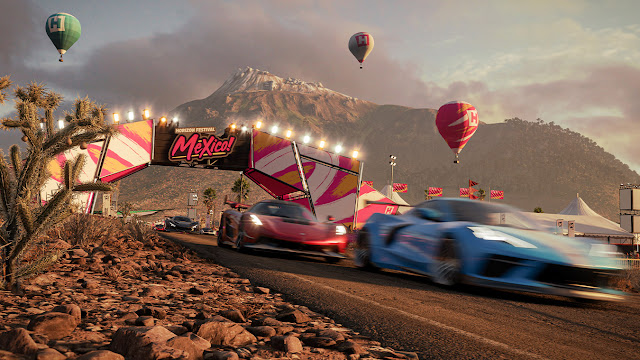 My favourite part of Forza Horizon 5 thus far was when it shut up for almost fifteen minutes.
A little under fifteen minutes of uninterrupted racing, free of clutter and noise. A chance to focus on the essence of what is clearly one of the best games of 2021.
The Goliath is the finale for one of the Horizon Mainstage events. Supposedly, it's the longest race in Forza Horizon history, according to the very cheerful lady who's constantly in my ear. It took me around twelve minutes from the start to finish, and provided an ideal opportunity to take in some new scenery and drive on roads I had yet to grace with my led foot.
It was a starting grid full of supercars, but beginner-friendly supercars. Fast, low to the ground; consumer-grade Batmobiles. They scream from the start line, and will weave and wobble at the hint of a change of direction, yet they're fairly easy to tame. On Horizon's advice, I selected the jet black Lamborghini from my garage, and it was perfectly suited to the task at hand. It was fast enough to make me feel like a bad lad, without putting me into a tree.

The race was superbly paced. I spent the first third moving up the pack, driving carefully but with purpose. The second third was a battle between the top pack, as we vied for pole position. I found myself in the lead for the final stretch, but second place was nipping at my heels until the bitter end. My driving seemed to have real consequence; each time I broke into a corner correctly, and flew out of it with a sudden burst of acceleration, I was able to pull away from my lead pursuer. When I misjudged the road or broke a little too hard, second-place would be on my bumper. The field was reacting naturally to my driving, rather than fulfilling pre-scripted roles.
Paradise City aside, there's hasn't been a more appealing place to race friends or twat off a ramp than Horizon's Mexico. The Goliath takes in almost every type of environment present in the full map. You race through colourful towns, bomb along coastal roads, and then slow down for trickier winding routes through hills and valleys. One minute you're in the jungle, the next you're sprinting through a dessert, before powering your way through concrete & steel, tunnels and bridges. Mexico is beautiful, and I feel a tad guilty destroying its catcti and hedgerows.
The radio is a constant presence and brings it all together. As impressive as the cars may sound, I'm focused on the music and the DJ chit-chat, which adds so much character to the world. All of my favourite racing games have a soundtrack full of licensed bangers - it has become somewhat of a pre-requisite for my enjoyment of racers.  I've always been impressed by Forza Horizon's manipulation of music, how tracks are faded in and out, songs are muffled when you drive through festival areas and then blasted out when an event starts, and here is no different.
I came first in The Goliath. Had I not, I'd have happily done it again. And as I finished, the relative quiet came to a screeching halt. I was once again subjected to audio and visual clutter. A podium full of show-off wankers doing bad robot dance moves in their colourful wellies. Another poorly acted and poorly written voice-over celebrating my clout; another screen so busy with icons that's it's almost impossible to process. Forza Horizon 5 is outstanding, but much like FH4, it doesn't know how and when to shut up. It bombards you with noise, visual and audio. Sometimes I appreciate that rambunctiousness, other times I'm bored by its conflation of being loud and being interesting.
That being said, I do love Forza Horizon 5. It feels like the first major event of this gen, and a game that we can all agree is worth playing. My Twitter feed is abuzz with screenshots and car talk, as we welcome new arrivals to our friend lists and share our love of Game Pass. It feels like Xbox is on a roll right now, and I know I'll be playing a lot of Series X the rest of the year.
Contemporary Games