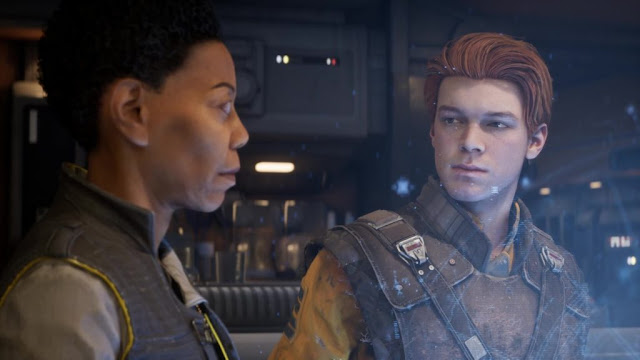 In Case You Missed it: Success in Akihabara / The Goliath and Peace & Quiet / A Rare Gaming Sesh
November Playlist
I've spent the bulk of November playing and enjoying Forza Horizon 5. You can read all about that in the last two links above.
I also dipped my toe in the Halo Infinite multiplayer. It's good but it hasn't really grabbed me, but then it has been several years since an online FPS did. However, it has definitely increased my interest in the single player campaign next month, so job done.
I finally got around to Jedi: Fallen Order earlier in November. I really should've played that much sooner. The first hour feels a lot like Uncharted in space, though it isn't able to maintain that level of quality throughout. I loved the characters, and although I never felt I'd completely gotten the hang of the combat, it was certainly satisfying. It's far from perfect, with overly long chapters, unrewarding exploration, and huge gaps between narrative beats, but when it's good it's really good.
Panzer Dragoon Orta is excellent, as some of you will have known for almost twenty years. The mix of unique visual style and some Series X magic makes it look far prettier than an OG Xbox game has any business being. I've also been dipping into Katamari Damacy Reroll. I've played bits and bobs of several incarnations of Katamari over the years, but this is the first time that I've truly appreciated it. I'm already stuck, but the wonderful music, bizarre presentation and trippy dialogue means I'm happy to keep falling short of the size minimum and trying again. And lastly, I played some Lost Planet 2. I think we all have games that we irrationally enjoy, despite their numerous faults, and this is one of mine. I told myself I'd play up to the big lizard lad whose digestive tract you enter and shoot with a big gun, and that's exactly what I did. A Saturday evening well spent.
Mercari Misbehaving
No Mercari purchases this month, but I definitely added to my retro-ish stockpile.
I had some Rakuten points to spend, so I picked up an Xbox 360 copy of Binary Domain (for backwards compatibility), Quantum Theory (the king of subpar, brown shooters), Bionic Commando (someone once told me this was good) and NBA Street Vol. 2, which I'll talk about later. That package brightened up an otherwise dull Wednesday.
I also  went wild in Akihabara. I won't rehash that here, as you can just click on the link to find out what goodies I found in the bottom of a junk bin, and which long-wished-for game I added to my Saturn collection.
Words: NBA Street Vol. 2
A few weeks ago a mini-doc about NBA Street Vol. 2 (PS2-GC-Xbox) made its way onto my Twitter feed. I'm very glad it did, as it's excellent and it briefly reignited a long-lost passion for basketball games. It focuses not so much on the nuts and bolts of the game, but more on how it captured the spirit of streetball, with guidance from people within that scene, and became a cultural meeting point for video games, basketball and hip hop. A once-in-a-blue-moon point of shared reference. You should give it a watch.
Watching that video, I found myself getting more and more excited. Not only was it reminding me of my love for the first NBA Street, but it was also framing the sequel as a game that ticked so many of the boxes that I want ticking. It touches on so many interests of mine, some current and some from a different time in my life. Bobbito Garcia, aka DJ Cucumber Slice, aka Kool Bob Love, aka other nicknames that aren't listed on his Wikipedia page, brought it all together for me. I could remember him from hip hop and streetball documentaries I'd seen in my youth. That smart-talking, ever-enthusiastic New Yorker who'd appeared on my telly so many years ago, mixing the music and sport that had enraptured me in my mid-late teens. And it turns out he's the announcer in NBA Street Vol.2! Sign me the fuck up.
So I bought a copy, and I got even more excited. Despite being the Japanese version, the hip-hop soundtrack is all there, as is Garcia's intoxicating commentary. It's a Japanese version in the loosest sense, with a basic translation in the main menus; pretty much everything else is presented in English. From the moment Pete Rock & C.L. Smooth trickled out of my CRT's mini speakers, I knew I was home. And from what little I've played so far, I can see why this sequel was so beloved.
I'm not really sure why I didn't play it back in the day. I loved the first NBA Street, was heavily into the NBA at the time, as I still am, and my PS2 was in good working order. Granted, I was in a gaming lull in the early-mid 2000s, but I still made a point of playing the games I knew I'd love. And this was most definitely a game made for me.
No worries though, as I plan on making amends now.
The Month Ahead
I just bought Guardians of the Galaxy, which should slot in nicely between now and the release of the Halo Infinite campaign. My interest went from zero to a much larger number than zero, 86 for example, following all the excellent word of mouth from people I trust.
I've yet to buy TimeSpliters 2 or Future Perfect on Xbox, but it's just a matter of time. I'm waiting for the perfect moment. It'll be glorious.
And of course, I'll be playing Christmas Nights on my Saturn on Christmas Eve. That's a little tradition I created for myself around ten years ago and have maintained ever since. My Saturn, a beer, and some quiet reflection before the wonderful madness of Christmas day. My favourite time of the year.
Monthly Round-up