Success in Akihabara: The Dungeons and Dragons Collection 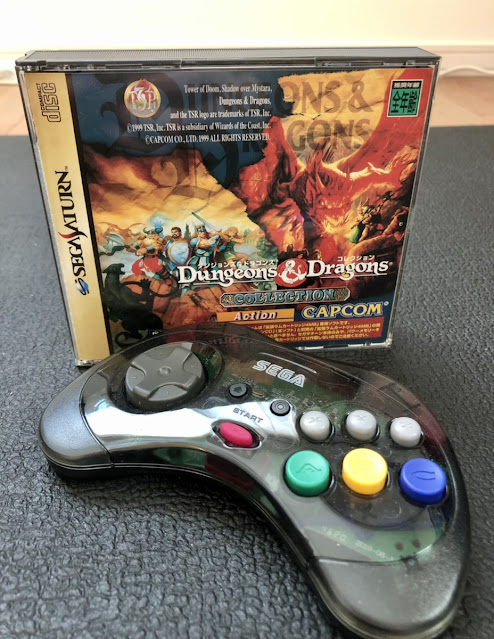 It was the last stop of the day. The Suragaya nearest the JR Station, the one tucked away down a side-alley. I wasn't holding out much hope for bargains, as it's usually over priced. Well-stocked, so worth a perusing, but you're unlikely to get your wallet out.
It had already been a very fruitful trip to Akihabara, Tokyo's electric town and home to all things video games, anime and anything remotely nerdy. It was a last-minute decision to visit two Sundays ago. Back when I was working in Tokyo, I'd stop by Akiba almost weekly, but the pandemic put an end to that. However, with the situation more under control, I'm starting to venture out a bit more now and I feel much better for it.
And nothing lifts the spirits quite like a trip to Akiba. As proof, here's a video of me struggling to contain my excitement.
Shopping on Mercari or Yahoo Auctions is fun, but it's not the same. You can find some unexpected bargains in your local Hard Off, but it's one shop and it's feast or famine. Akihabara isn't what it used to be, but you can't beat that experience of being surrounded by games and thousands of people who you know you could definitely batter, if necessary i.e. otaku.
My first stop of the day was Book Off. The rule of thumb is that the further you get outside of city centres, the better the Book Off, but the inner-city branches can surprise you from time to time. This was one such occasion. They had clearly had an over-night sort out of their 5th-7th Generation stock, and there were several trays full of "junk" titles calling my name.
One man's junk is another man's Lost Planet 2 on the Xbox 360.
And for only ¥264, I should add. I was in my element, balancing trays of games in the crease of my arm, rifling through stacks of cases at breakneck speeds, relying on my knowledge of 25+ years of cover art to decide what to pick out and what to discard. Reading spines is for losers! I nabbed Dragon's Crown and Operation Racoon City for the PS3, Metal Gear Solid Bande Dessinee for the PSP, and Crackdown and Lost Planet 2 for the 360. A little over ¥1000 for the set.
I pretty much skipped out of Book Off, I was that pleased with myself.
Later on, I grabbed Max Anarchy (PS3) for ¥100 from the usually over-priced, unless you know what you're looking for, Super Potato. That place is far more pleasant to visit, now that there are no backpack-wielding tourists. In fact, that applies to Akihabara in general, as it's far quieter without the coach loads of international visitors that frequent the place in less plague-y times. Though to be fair, those visitors keep many of the shops open, and their return will be eagerly awaited by local businesses.
And then, at Suragaya, I stumbled upon Marvel vs. Capcom 3 (PS3) for ¥400. My daughter and I have already had a ton of fun with that over the last week. I also spotted No More Heroes 3 for a very reasonable ¥3700 which I would have bought, had I not blown the remainder of my budget on the top entry on my Saturn wishlist: The Dungeons and Dragons Collection.
The Dungeons and Dragons Collection was a Japan-only, Saturn exclusive, though it was originally intended for the PlayStation and the US market too. It was one of the last high-profile releases for the Saturn, arriving in March 1999, and features two Capcom arcade classics: Tower of Doom and Shadow Over Mystara. It came with a packed-in 4MB RAM cart, or if you already had one from a previous Capcom purchase, you could buy a version without. It's regarded as one of the best games on the Saturn by people who would know that kind of thing.
People like me?
While I hadn't exactly been hunting for it, it had been near the top of my wishlist for some time. It's one of the few Saturn games I had been willing to pay proper money for, but the usual asking price of around ¥10,000 was a little rich for my blood. I'm used to paying a couple hundred yen for my Saturn games, and on a rare occasion a couple thousand. Imagine my surprise when I saw it sat on Suragaya's shelf for ¥6000. The label warned of some scratches on the disc, which is to be expected from a twenty year old game. The mention of mold had me more concerned, and I wondered if I had misread the scrawled, handwritten Japanese on the price label. I loitered for a few minutes, carefully planning out my Japanese request to see the disc and get more information about it's condition - what I blurted out at the counter was far less refined but it got the job done. The mold was real, but the shopkeeper removed it with some rubbing alcohol and my rat-eared copy of the D&D Collection suddenly looked pristine. Sold!
And now I own one of the few non-junk-bin retro games that I'd been looking for. I haven't had time to give it a proper go, other than to load it up and make sure that both discs work, which they do. My intention is to play it in co-op with my daughter, who I shall subject to yet another Saturn game. Good thing she's fond of me.
I've been buzzing off this trip to Akihabara for over a week now. One of those once-a-year visits where you find almost everything you were looking for, at prices that you wouldn't have expected. But more than that, it was about getting out again. Resuming an activity that I had taken for granted. Those things seem so much more important now, and infinitely more worthwhile.
Anyone fancy a spot of shopping this weekend?
Akihabara Retro Gaming