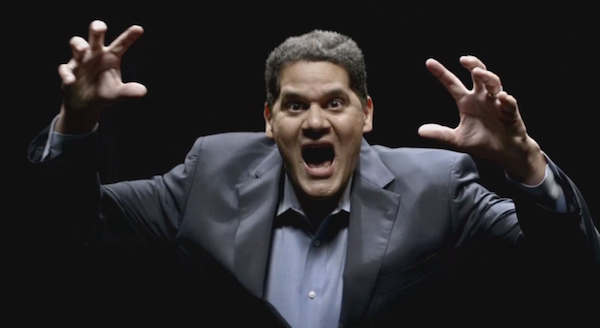 I can't say that I enjoyed sitting through Nintendo’s Digital Event. Their presentation was charming and well put together, just like their games, but it was in desperate need of a Splatoon-like shot in the arm.

The show kicked off in style with Iwata, Reggie and Miyamoto appearing as muppets. They gradually transformed into the main characters from Star Fox, an inventive way of announcing the latest entry in the well-loved series. Star Fox Zero appeared to make convincing use of the Gamepad and has since been confirmed as being developed by Platinum Games, who have had a very busy E3. I thought it looked dated, sparse and visually unappealing, especially having just watched space combat in No Man's Sky. Still, it never hurts to start things off with a big name.

Real Reggie was up next, talking about new Amiibos and a partnership with Activision via a new Skylanders game. I couldn't care less about Amiibos, but Nintendo are onto a winner here and I can't blame them for wanting to get as much out of these toys as possible. Animal Crossing figures would follow later in the presentation, causing grown men and women to go weak at the knees. Not me though, I hate fun.

The Legend of Zelda: Tri Force Heroes looked nice, and will be joined by Hyrule Warriors on the 3DS.  Metroid Prime Federation Force 2016 infuriated certain man-babies, but don't ask me why. I was just about to wander off and grab a stiff drink when the trailer started for Fire Emblem Fates. It looked great, though it was all CG and did little more than offer a release date of 2016.

I'm even more confused about the Fire Emblem, SMT crossover than I was before its bizarre trailer, but I did enjoy Iwata-muppet staring at some bananas. I am fond of both fruit and the President of Nintendo, so that was nice. Xenoblade Chronicles X got a release date, December 2015, which seems like a long way away.

I appreciate that this is a transitional E3 for Nintendo, being sandwiched between the announcement of their next platform, NX, and its future reveal. Still, this was a disappointing showing and by far the least memorable of the big three.
E3 2015