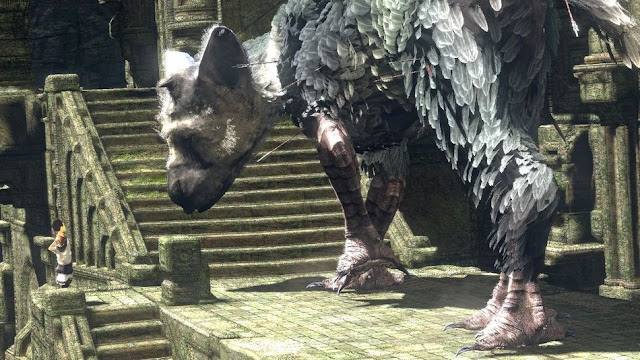 It was 2am and I was fading fast. I wasn’t sure if I was going to make it past the opening montage, let alone stay awake long enough to see Shawn Layden’s strange beard. However, by 3.30am I was wide awake, unable to stop thinking about impossible games come true. Sony owes me a good night’s sleep.

The Last Guardian, straight out the gate. It’s not vapourware, it’s a game and it looks magnificent. I was mesmerised by the way the creature moved and I cannot wait to learn more about how it interacts with the boy. 2016 is a very vague release date, and I do worry about further delays, but TLG is alive and well and Sony has turned a potential disaster, and a long running source of embarrassment, into the toast of E3.

Guerrilla’s new IP, Horizon Zero Dawn, looks great and is a huge departure from their previous work. We can all now stop making jokes about Killzone RPG and look forward to hunting robot dinosaurs in 2016. New Hitman fell flat and I can’t muster much enthusiasm for Street Fighter V. Hello Game’s Sean Murray made sure that we knew exactly what kind of game No Man’s Sky is and successfully demonstrated the breath-taking sense of scale that makes his game so unique. I was disappointed that no release date was offered, especially as I had hoped it would be out this Summer/Autumn.

Media Molecule’s Dreams was the most intriguing game on show. I have so many questions about this project and I do wonder whether other people are going to enjoy experiencing my dreams - they get weird, yo. Firewatch was a game that was mentioned and I have no idea why we are still talking about Destiny nine months later. World of Final Fantasy looks just like the kind of game I’d never play.

And then Sony brought the house down, again, by announcing Final Fantasy VII Remake, coming first to PS4. Those crazy bastards at Square-Enix actually went ahead and did it, and I’m very conflicted about the whole thing. I’m obviously excited but also cautious. Will VII shot through the Advent Children lens please anyone? It’s great the Square-Enix is listening to their fans, but I wouldn’t expect the FFVII you remember. Still, wow!

Next, Sony provided a stage for Yu Suzuki to announce Shenmue 3, a game I would’ve bet a lot of money on never happening. I love the excitement surrounding this announcement, even if I’m not the biggest fan of the series. Once I’d composed myself, I realised Sony had pulled a fast one here, basically just pushing a Kickstarter and putting the onus on the audience to make it happen. Still, good on Sony for pulling it off.

Batman, Morpheus, Call of Duty, montage, something about Star Wars – these all seemed very insignificant following TLG, FFVII and Shenmue 3. Uncharted 4, however, regained my attention and closed the show in style. The technical issues were a bit embarrassing, but that was quickly forgotten once the demo got going. Naughty Dog knows what I like, and they gave me plenty of it here.

Sony should not get a free pass for failing to offer games for 2015, nor for killing off the Vita. However, it’s hard to get mad at them when they made the PS4’s future look so irresistible. Sony delivered, and gave us an E3 presser for the ages. So, pretty good then.
E3 2015