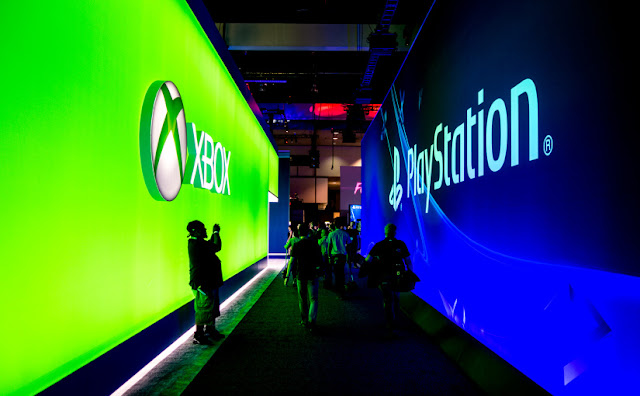 I love E3. A week of press conferences, new trailers, surprise announcements, gown men whooping at map pack announcements, and unparalleled levels of internet snark - what's not to like? It is the best and worst of video games and I look forward to it every year.

So, what can we expect from this year's extravaganza? I reckon at least one of the following:

Microsoft is up first on Monday, so let’s start there. Halo 5 and Forza 6 will get plenty of stage time, as will timed exclusive Tomb Raider: Rise of the Tomb Raider Tomb Raider. Unfortunately, we will not be seeing more of Crackdown, Scalebound or Quantum Break as "there simply isn't enough time". MS tend to keep their pressers far leaner than Sony, which I appreciate, but I'm sure they could made some time for three of their most anticipated exclusives. I expect Gears of War will be present in some form, probably the already leaked HD collection, and there'll be a Fable something, because there always is.

Sony will be selling us on 2016, after a relatively quiet year for platform exclusives. We will probably be introduced to Guerrilla Games long-rumoured new IP, and I wouldn't be surprised if we get a new God of War, whether we want one or not. Third Party exclusives Street Fighter V and Persona 5 should feature, and perhaps we'll be treated to a Demon's Souls remaster. A new The Last of Us would get tongues wagging, but it’s another Naughty Dog game that I’m most anticipating. I expect that Uncharted 4 will steal the show with something akin to the breath-taking E3 '09 demo for Uncharted 2. As for hardware, Sony will mention their VR headset, Morpheus, at every opportunity, and with the exception of some cross-play love, I don't expect the Vita will even get a look in.

It’s about time No Man's Sky got a release date and I'm far more excited than I should be to see footage of Uncharted 1-3 looking all pretty on the PS4. If The Last Guardian is still in development, as has been rumoured, perhaps it will take the place of Uncharted 4 as Sony's big title heading into the holiday season. Personally, I won't believe it until I see it, and even then I’ll be sceptical.

Nintendo will once again shun the traditional press conference, in favour of a special Nintendo Direct and some Tree House broadcasts, which worked a treat last year. This might be a quieter E3 for Nintendo compared to the last; we already know what they won't be talking about (NX and new Zelda) but are far less clear on what they will be discussing. Star Fox should take centre stage, and maybe this is the year that we finally get a new Metroid. Future support for Splatoon will be detailed and I'm sure Reggie will have plenty to say about the next phase of Amiibo. A 2015 release date for Xenoblade Chronicles X would be very welcome, as would news on Fire Emblem If for the West. Having already announced their next phase of platforms, this will be an odd year for Nintendo, and I'm not really sure what to expect.

There is plenty to get excited about outside of the big three. The artist formerly known as Konami will reveal a six minute, Metal Gear Solid V: Phantom Pain trailer. The footage is edited by Kojima, but don't expect him to make an appearance at E3 following his divorce from Konami. There will of course be updates from the usual suspects - new Call of Duty, Battlefield and Assassin's Creed - and hopefully Bioware have more to show than just more concept art for the next Mass Effect. EA will be showing off the latest Need for Speed and perhaps an update on the new Burnout, while Mirror's Edge Catalyst will be causing motion sickness across the internets.

I'm slightly concerned that we are (potentially) getting another Dark Souls so soon after DS2, and hot on the heels of DS’ spiritual successor Bloodborne, but I shouldn't complain. Platinum are coming to E3 with a brand new game and I'll be interested to find out if Capcom's Deep Down is still alive and well. Failing that, I'd settle for news of a Western release for Dragon's Dogma Online. A sequel to Red Dead Redemption would make me squeal with glee, but I don’t think Rockstar will debase itself with an E3 announcement. Fallout 4 will get plenty of screen time during Bethesda's conference and here's hoping for Final Fantasy XII HD at Square Enix's presser.

Let's finish with some slightly less obvious predictions. Puyo Puyo Tetris will be a digital-only, Wii U and 3DS exclusive in the West; the Mass Effect Trilogy will arrive next year on PS4 and Xbox One and a prettier version of Red Dead Redemption will be coming to current gen. Syphon Filter will make a comeback and, fuck it, we are getting a platform exclusive, Shenmue HD Collection.

And that's your lot. I'll be watching and tweeting the press conferences as they happen (@toomanywires_), with impressions to follow here during the week. Happy E3.
E3 2015