No Man's Sky - A Lukewarm Take 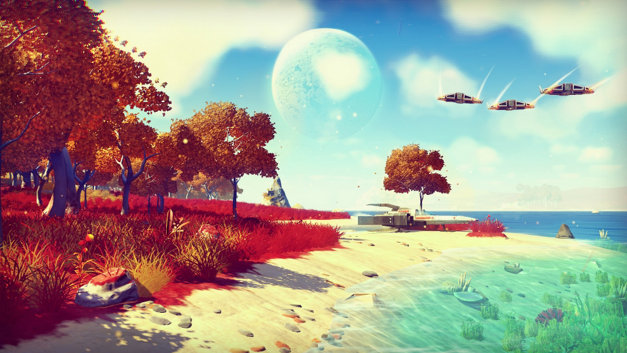 It has a wonderful sense of style. I love the warm colour palette and it absolutely nails the seventies sci-fi vibe. No Man's Sky looks a treat, but I'm struggling to think of anything else nice to say about it.

Expectations were through the roof. I'm not interested in whose fault this was, who should be thrown in prison or banned from NeoGAF. What might have been a PSN gem was instead miscast as a AAA experience. Hello Games is a talented studio, but this was never going to be Mass Effect Infinite or Skyim: The Next Generation.

I was expecting something more limited in scale. I thought it would be a beautiful and relaxing game of exploration and gathering, something I could chill out to after a stressful day at work. I wanted to be able to wind down by picking some Martian flowers and discovering some oddly-shaped rocks. That sounded pleasant, and realistic, but NMS let me down.

It should have worked as an explore-and-gather experience, but it doesn't. It wants you to visit countless procedurally generated planets but there's fuck all point. You can walk for hours on end, but I've yet to find a destination worth hiking to. Each settlement looks like the last and each monument overly familiar; you crest a hill only to see the same landscape stretching out before you. On top of this, resource management is a disaster. For every five minutes I spend foraging, mining and crafting, I'm having to spend just as much time clearing out my tiny inventory, agonising over what to dispose of so that I can make space for more materials that I'll probably throw away five minutes later. I'm aware that my inventory is upgradeable, but like most things in NMS, it's not explained. Besides, I doubt I have room for the upgrade materials!

I have no idea what materials do what, and there is no central pool for storing resources. Transferring from exosuit storage to ship is problematic as you have to be within range of your craft, which is a comically short distance. The journey back to the space shop, where I can sell unwanted items and buy a new ride, is always a little further than I'm willing to travel, so I end up simply throwing things away. Why not allow us to sell unwanted resources straight from the menu and buy those that we need? Mankind has mastered intergalactic travel but we're still having to visit the shops twice a week with our bags-for-life? The future is rubbish.

Space combat is near impossible, core mechanics are poorly explained, and travelling from one planet to the next, even at super duper hyper speed, is laborious. These journeys don't create a sense of distance and space, instead they make me wish I'd just stayed on earth. Everything is a slog and I've found no pay off. I struggle to comprehend what Hello Games was trying to achieve. It's a bit of this and a bit of that, but nothing much at all. It does look nice though.

I wanted to be the contrarian. I wanted to look beyond the faults and broken promises and discover the beauty in NMS. I looked, but I came up empty.
Contemporary Games